The red fox actually has many different variations of fur, including silver and brown.

Click through all of our Red Fox images in the gallery. 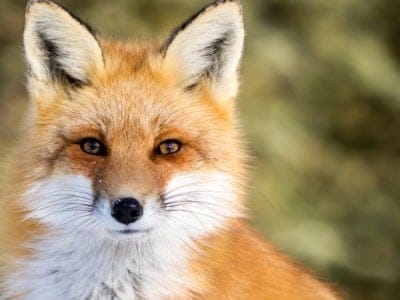 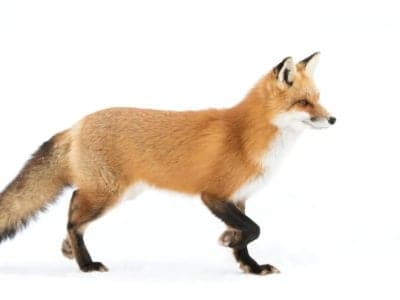 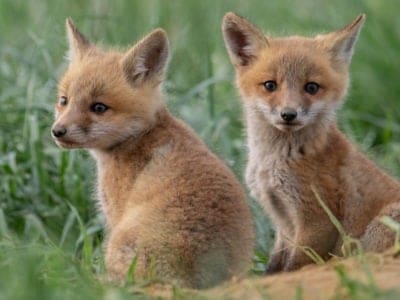 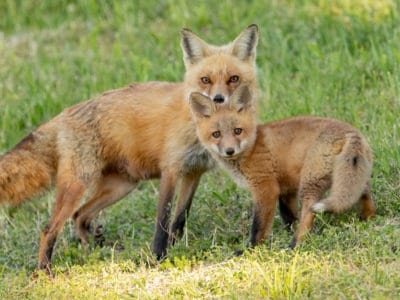 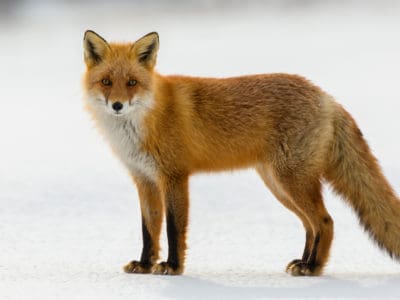 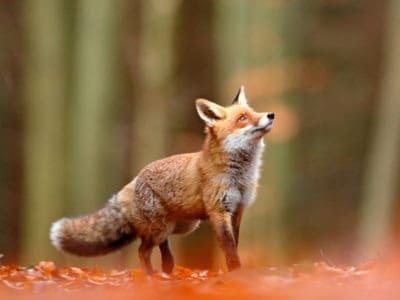 View all of the Red Fox images!

Garbed in its customary red, silver, or brown fur, the red fox is among the most common carnivorous mammals in the world.

This species is a tenacious and wily survivalist in the wild. The red fox is an animal that has learned to thrive in many different climates and habitats, from steep mountain cliffs to flat and featureless deserts. The red fox seems like a natural part of our landscape, having adapted to life near humans, and yet retains its wild and enigmatic nature.

The scientific name of the red fox is Vulpes vulpes, which means simply fox in Latin. Due to its widespread distribution, there are more than 40 subspecies of the red fox currently recognized. The red fox itself is just one of 12 species in the Vulpes genus along with the big-eared Fennec fox, the all-white Arctic fox, and the Bengal fox. The larger taxonomical family to which the red fox belongs is called by the scientific name of Canidae. It also includes wolves, domesticated dogs, and all other foxes.

The red fox is an animal with one of the most recognizable body shapes in the natural world with its slender legs, big bushy tail, pointed ears and snout. The much desired fur consists of two distinct layers: a coarser outer layer of guard hairs and a softer under layer of fur. The most common coat color of this species is red-orange with white fur on the lower face, chest, and tip of the tail, plus black fur on the legs and tail. Other common variants include the silver fox (black and silver), the cross or brant fox (yellow-brown and black), and the Samson fox (a wooly coat without the coarse guard hairs).

A fully grown adult red fox is small by the standard of many other predators. The body measures about 26 to 42 inches long; about 14 to 16 inches of this consist of the tail alone. Most adults tend to weigh about 10 to 15 pounds, but some specimens weigh well over 20 pounds. This is about the size of a small domesticated dog. Size varies dramatically by subspecies.

The red fox is part of the same taxonomical family as the wolf, but its social behavior is quite different. Instead of forming packs, the red fox maintains an exclusive territory with only one adult male and one or two adult females, plus their offspring. These territories can range in size from 5 square miles in areas with abundant resources to 20 square miles in more barren areas.

These family territories consist of a main den (with a few simple passages and rooms) and several temporary or emergency burrows spread throughout the area for safety and rest. The burrows are dug within slopes, bank, ravines and rock clefts. Although the fox is a proficient digger, it’s often easier for the fox to simply seize a pre-existing den from rabbits, marmots, or other animals. Once under the ownership of the fox, the den sometimes serves as a multi-generational home that’s passed down from parent to child. If the family survives intact, then these homes can sometimes last for decades.

The red fox is most active in the nighttime hours at dusk and dawn, when it hunts and forages for food. This species has all kinds of interesting adaptations to help it survive in the wild. With its amazing agility, the red fox can run about 30 mph and leap more than 6 feet in the air. Moreover, the fox’s tail is an important instrument that provides balance and serves as warm cover in cold weather.

The facts suggest that that the red fox is a very intelligent species with several different ways to communicate with each other. The body language of the ears, tails, and posture can convey all kinds of social information, including dominant or submissive behavior, playfulness, sexual receptiveness, and much more. Foxes also mark their scents on trees or rocks to announce their presence. These scents are created through urine, feces, and various glands around the body. They have an excellent sense of vision, hearing, and smell. Lastly, they have 28 different kinds of vocalizations, including several variations of barks and whines to interact with each other.

The red fox is exclusively native to the Northern Hemisphere, including the North American countries, Europe, most of Asia, and North Africa (including the Nile). It was later introduced to Australia in the 19th century, where many people consider it to be a real pest. Where it’s not outcompeted by dingoes, the red fox has been implicated in the decline or extinction of many native Australian mammal and bird species.

With more than 40 subspecies, the red fox is highly adapted for a variety of different habitat, including forests, grasslands, tundra, prairies, mountains, and even deserts. Each subspecies prefers to stay within a specific habitat or a narrow mixture of habitats.

One of the more amazing facts about the fox is that they play a role in the ecosystem by keeping the number of small but rapidly reproducing prey species in check. They can also be a nuisance by killing domesticated animals or driving some species to extinction. Foxes are sometimes killed or squeezed out of their habitats where they overlap with larger carnivores, so the decline of their natural predators has lifted some pressure on the red fox populations, causing a boom in numbers.

What does the red fox eat?

The red fox is actually an omnivore, but the bulk of the diet consists of rabbits, mice, voles, birds, frogs, fish, eggs, and even dead carrion. Fruits and vegetables serve as a secondary source of food. This species is just not a particularly picky eater. If the fox ventures close to humans, it also has no particular compunction about eating leftover garbage or pet food. The red fox needs to eat around 1.1 to 2.2 pounds of food every single day to survive. It will store any extra food from its diet in various locations around its territory.

What eats the red fox?

The fox’s main competitors are wolves, cougars, lynxes, and bobcats, some of which actually kill foxes without the intention to eat them. Eagles and owls are also known to prey on younger kits.

The red fox’s mating strategies span the entire spectrum between fully monogamous and fully polygamous. Some foxes stick to a single mate, while others breed with multiple mates. However, no matter how many mates she has, the female only tends to form a bond with a single mate.

Mating season tends to take place in winter or early spring, but the female fox is only in heat for a short period of time, so males sometimes engage in fierce competition with other for access to reproductively available females.

After a gestation period of 56 to 70 days, the female gives birth to a litter of up to 13 kits (though five is the average). When it’s first born, the fox is completely blind and helpless. It has a brown or gray fur color, which will develop into the final color after about a month.

Family cohesion is a very important element of its survival. Both parents and the older offspring play an important role in raising the young kit. The father supports the mate and its offspring by providing food, but it never actually ventures into the maternity den. By the autumn, the young kits are ready to start a new independent life on their own.

In captivity, where it’s free from most predators and diseases, the red fox can live about 10 to 12 years. But in the wild, the life expectancy is only about two to four years. Most fall victim to predators or diseases before they can die to natural causes.

Though still hunted for sport, fur, or just to remove it from the environment, the red fox is one of the most widespread carnivorous mammalian species in the world, perhaps because it has benefited from human activity more than it’s been harmed by humans. Exact population numbers are not known, but they are likely to be in the tens or hundreds of millions worldwide. The IUCN Red List currently classified it as a species of least concern, the highest possible classification. This means it requires no special conservation efforts to survive.

Red Foxes in the Zoo

Red foxes are a prominent exhibit at many zoos across the country such as Zoo Idaho in Pocatello, the Brevard Zoo in Melbourne, Florida, the Cosley Zoo in Wheaton, Illinois, the Little Rock Zoo in Arkansas, the Big Bear Alpine Zoo in San Bernardino, California, the Alaska Zoo in Anchorage, and the Cleveland Museum of Natural History.

The red fox poses almost no danger to people, because it would prefer to run away. But if you harass it, then the fox can deliver a vicious bite that may require medical attention.

How big do red foxes get?

Red foxes tend to grow no larger than 42 inches and 24 pounds.

What are the predators of red foxes?

The main predators are the wolves, cougars, lynxes, bobcats, eagles, and owls.

Is it rare to see a red fox?

The red fox is very common throughout the entire Northern Hemisphere, especially the North American, European, and Asian continents. You are more likely to see them in a rural area than urban one, and they tend to be a little shy around people, but urban encounters are not impossible either. Some fox populations may have even have specialized for an urban lifestyle.

Where do red foxes live?

The red fox can be found in forests, grasslands, tundra, prairies, mountains, and deserts.

What do Red Foxs eat?

What Kingdom do Red Foxes belong to?

How fast is a Red Fox?

A Red Fox can travel at speeds of up to 31 miles per hour.