Written by Cindy Rasmussen
Published: May 17, 2022
© Yatra/Shutterstock.com
Share this post on:
More Great Content:
What’s a Baby Koala Called + 4…
Koala Teeth: Everything You Need to Know
10 Incredible Koala Facts
Koala Poop: Everything You've Ever Wanted to…
Koalas to “Vax Up” Against Chlamydia
See 'Dominator' - The Largest Crocodile In…
↓ Continue Reading To See This Amazing Video

Koalas are cute fuzzy animals that have a reputation for being calm, friendly creatures. This is mostly true but they are wild animals and can act unpredictably. Koalas have long sharp claws on all four of their feet and teeth that can snip through leaves. But are koalas dangerous?

What is a Koala?

Koalas are sometimes called koala bears because they look like teddy bears, but they are actually marsupials, not bears. Other marsupials, like kangaroos and opossum carry their young in their pouches. Koalas have thick grey fur and large fluffy ears. They have a black oval nose and small yellowish brown eyes. Koalas are about 24-33 inches tall and weigh around 30 lbs., about the same size as a two-year-old child. Australia is the home of koalas where they live almost entirely in eucalyptus trees. While some animals are opportunistic feeders, eating whatever they can get their hands on, Koalas have one of the most limited diets in the world. Eucalyptus leaves is about all they eat.

Koalas are not typically dangerous. They sleep 22 hours a day, high in eucalyptus trees, so there are minimal interactions with humans. If you came across one in the wild they would probably climb higher on their tree to avoid you. However, if they felt cornered or threatened they could become aggressive.

Are Koalas aggressive towards each other?

These marsupials are solitary animals and do not interact with other koalas very often. A study of captive koalas did record incidents of aggression but most incidents were “brief, low level interactions”. There were some incidents between males that the researchers characterized as “major fights” which involved chasing and wrestling with some bites exchanged.

Have Koalas ever attacked humans?

Yes, there are a few recorded instances of koalas attacking people, but it is extremely rare. One woman in Willaston, Australia was bitten on the leg while she tried to protect her dogs on a walk. She put herself between a charging koala and the koala chomped onto her leg and wouldn’t let go.

A video shows two koalas fighting each other when a bystander gets in the way and one of the koala attacks his leg. He is shown laughing afterwards, so probably not seriously injured.

Another video shows a zoo keeper giving a speech about a koala in an enclosure when the koala climbs out of its tree and chases the man. The man is able to climb to a corner of the enclosure and continue his speech but the koala keeps him cornered. Then a small Quokka, a short-tailed wallaby, came out from under a nearby bush and the koala attacked it! The zoo keeper tries to break them apart and the koala chases the man again. Clearly some koalas can be dangerous.

Are koalas dangerous to pets?

Koalas can be dangerous to pets and pets can be dangerous to koalas. Koalas are capable of killing smaller pets like cats or small dogs, but this is uncommon. It is common for Koalas to be killed by dogs. According to the Queensland Goventment site, “Around 100 koalas are taken to  Moggill Koala Hospital, Currumbin Wildlife Hospital and Australian Wildlife Hospital every year because of dog attacks.” Even with hospitalization, around 75 percent of the attacked koalas die. Keeping dogs on leash or fenced in especially at night can help prevent koala-dog encounters.

Do koalas carry any other diseases?

Yes, unfortunately there is a big problem with koalas contracting chlamydia. The variation of koala chlamydia is different than human chlamydia and is caused by two kinds of bacteria, Chlamydia pecorum and C. pneumoniae. It is spread the same way between koalas, during mating, so it spreads easily. Large populations of koalas in southeast Queensland and New South Wales are suffering from the disease. Symptoms in koalas include eye infections, blindness, bladder infection and infertility. A large scale vaccination program in Australia began in October 2021 to help fight the disease. Koalas are considered Vulnerable by the IUCN, so keeping koalas healthy and able to reproduce is a priority.

Can humans get diseases from koalas?

Koalas do not have rabies so they can not give humans rabies. Koalas can pass on a form of chlamydia if a person comes in contact with koala urine. Since this is an unlikely scenario it is unlikely that koala would pass on diseases.

Are koalas dangerous to drivers?

In a similar way that white-tail deer are dangerous to motorists in America, koalas can be dangerous to drivers in Australia. Koalas that try to cross the road can be hit and cause an accident. Records from animals hospitals show that an average of 300 koala are hit by cars each year and that is just in South East Queensland. Advocates ask that people be aware of koala crossing signs, be extra careful driving at night when koalas are on the move and be aware that koalas are more active between July and September. This will keep everyone safer to avoid incidents like these: 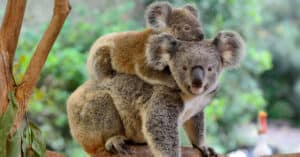