Because of their unique venom delivery system, stiletto snakes are almost impossible to hold safely in the usual way (with fingers behind the head) without being bitten. 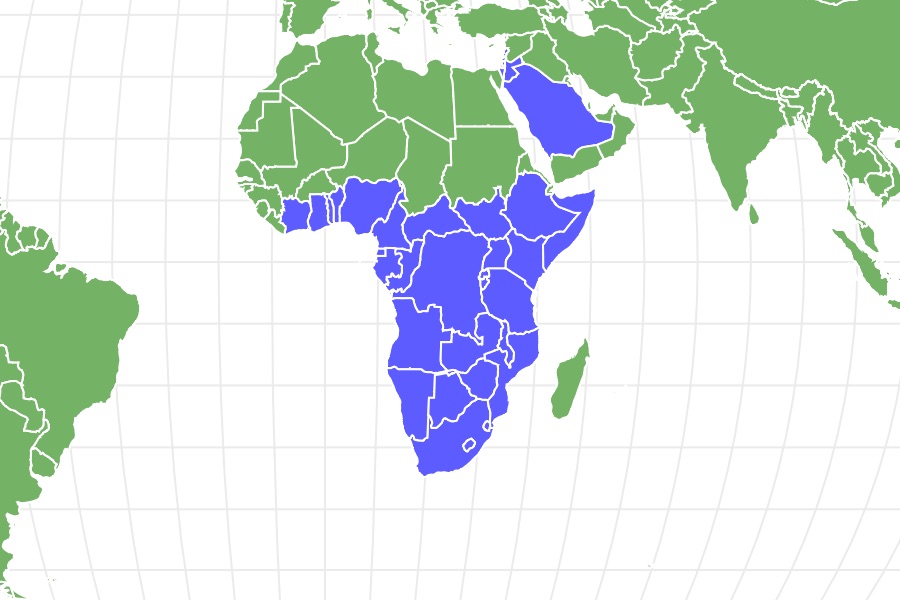 View all of our Stiletto Snake pictures in the gallery.

View all of the Stiletto Snake images!

The stiletto snake is one of the most fearsome predators in Africa, even though it looks relatively harmless. With wandering fangs, these snakes can’t be held at any place on the body safely, and it’s incredibly difficult to tell the head from the tail. Proper identification of the stiletto snake is crucial to avoid thinking you are completely out of the woods. Since they look a lot like harmless species, make sure to look for the small eyes and black or dark brown colors that often adorn their scales.

Here are a few interesting facts about stiletto snakes.

Where to Find Stiletto Snakes

The stiletto snake is endemic to Africa, though they are able to live in a wide range of habitats in the location. Their primary location is in sub-Sahara Africa, preferring habitats with plenty of vegetation to conceal themselves. This vegetation also attracts their prey, ensuring that they can indulge in their carnivorous diet.

These snakes prefer to make their habitats in fynbos, karoo scrub, semi-desert, savannahs, grasslands, woodlands, and forests, allowing them to thrive as vicious predators.

The stiletto snake, which also goes by the side-stabbing snake or Bibron’s mole viper, has the scientific name Atractaspis bibronii. Their scientific name originates from Gabriel Bribon, the late French herpetologist. It is part of the Lamprophiidae family of the Reptilia class.

There are over 20 different species of stiletto snake.

The current conservation status for stiletto snakes is “not extinct.” Though there is not a specific population known, a project in South Africa called Save the Snakes works to educate the public about the importance of snakes in their ecosystems.

How to Identify Stiletto Snakes: Appearance and Description

Identification of these snakes is a little difficult because they tend to look like other species in their colors and pattern. However, improper identification is dangerous because their similarities to harmless snakes are misleading.

These animals are highly dangerous, featuring fangs that can move around to the outside of their mouth without any other movements. In most cases, the entire body features a range of dark brown to black colors. However, some of them may be black through most of the body and white on the belly.

The eyes of the snake are quite small. Generally, their size is about 12-16 inches long. In some cases, these snakes have been known to reach a much larger size at 21+ inches long.

How to identify stiletto snakes:

The Curious Fangs of the Stiletto Snake

The fangs of these snakes are the reason that they have their name. These hollow fangs are incredibly large, and the snake doesn’t even need its head to be free to bite. Instead, it can twist its head sideways to make contact with the predator and its fang, releasing the venom quickly. Even if it can’t move its head, the fangs have a flexible, socket-like joint where the fang meets the jaw. They don’t even need to open their mouth to strike prey.

If the snake strikes a human, the only way to manage symptoms and potentially protect themselves from the snake venom that melts bone is to seek attention at a hospital immediately.

Stiletto Snake Venom: How Dangerous Are They?

When it comes to the venom of the stiletto snake, beware! This venom is incredibly toxic to anyone, even though the snake only produces minimal amounts. The majority of people bitten are snake handlers, who unknowingly are bitten when they hold the snake by the neck. According to researchers, while there are no fatalities currently reported for this venom, the severity of the symptoms is quite painful with a bite wound. With the initial onset of the bite, you might experience nausea or a dry throat. However, as the venom progresses through the body, the bite wound becomes incredibly painful. Blistering, necrosis, and lymphadenopathy (swelling of the lymph nodes) are common reactions.

The snake venom that melts bone is no laughing matter, and fast treatment is crucial to reduce the risk of losing digits. Unfortunately, no known anti-venom works, and you will need to go to a hospital or medical practitioner to treat the symptoms.

This snake’s venom is incredibly dangerous to humans. They are not outwardly aggressive and won’t seek out humans to bite, but they have no problem defending themselves against a threat. Luckily, they are endemic to Africa, so it is unlikely that humans will naturally come across these animals in any other region.

How venomous is a stiletto snake?

This venom won’t likely cause death. However, the cytotoxic reaction is known for causing incredible pain if you’re bitten. It may also be a catalyst for swelling, blistering, and tissue damage. Some people can lose a finger or a toe from the bite, even though they survive.

Where are stiletto snakes found?

The primary location where stiletto snakes are found is in sub-Saharan Africa. They prefer to live in the rainforest, which sometimes takes them as far as Liberia and Guinea.

How big do stiletto snakes get?

Typically, the size of the stiletto snake is about 350mm. In some cases, they can grow to be twice this size, which depends on the room they have to grow.

What do stiletto snakes eat?

Primarily, the diet of these predators includes reptiles, small mammals (like rodents), and sometimes birds.

How do you handle a stiletto snake?

There is no way to safely pick up a stiletto snake because of the socket-like joint that allows their fangs to pivot. Holding them behind the head will make no difference.

Where is the stiletto snake found?

Why is the stiletto snake so dangerous?

The snake venom that melts bone is easily the reason that this reptile is so dangerous. While the venom won’t kill you, the severe symptoms have no anti-venom that will work against it, and medical attention is necessary. It is sometimes hard to tell the head and the tail apart, making it difficult for handlers to pick it up without being struck with their fangs. In fact, even when held behind the head, it is quite easy for the stiletto to turn and bite with a single fang.

Why is it called the stiletto snake?

The stiletto snake gets its name from the shape of its fangs, which are large and hollow. They are named for the stiletto dagger, which is a weapon used by assassins. They only need a single fang to release venom with a bite.

How do stiletto snakes hunt?

To attack prey, the stiletto snake places its head above it. Then, they use the muscles above their fangs to rotate it like a switchblade, stabbing their prey in a quick movement backward and sideways.

Not necessarily. The only way that the stiletto snake is a threat is if you attempt to handle it, which will undoubtedly result in being bitten.

What are the differences between a stiletto snake and a wolf snake?

At first, it might be difficult to tell the difference because they are both slender, dark in color, and quick. But the most significant difference between them is the shape of their tails.

What are the differences between a stiletto snake and a mole snake?

The major difference between a stiletto snake and a mole snake is their size.