Baby chameleons are astounding and perplexing creatures with many interesting things about them. Sure, you probably knew that some chameleons can change color. But did you know that Jackson’s Chameleons don’t lay eggs? What about that the smallest chameleons on Earth weigh less than a penny?

Keep reading to learn 5 amazing facts about chameleon hatchlings and see some adorable pictures along the way!

#1: A Baby Animal Chameleon is Called a Hatchling!

Baby chameleons are some of the most astounding and interesting reptiles on Earth. Like many other types of reptiles out there, most chameleons hatch from eggs. A newborn chameleon is called a hatchling, but they’re not the only one! Baby alligators, turtles, and even birds share the same name!

Since chameleons are called hatchlings, it might be hard to believe that some species have live births. However, Jackson’s Chameleon does just that. The scientific word for this process is “oviviparous reproduction”. This is just a fancy way of saying that Jackson’s Chameleons incubate their eggs inside their bodies instead of burying them underground like many other chameleon species.

Jackson’s Chameleon hatchlings incubate inside their mother’s womb for about four to six months before birth. They are typically born in groups of anywhere from eight to thirty babies and are born brown. After about four months, their skin changes to the bright green hue that they are well-known for.

Live births aren’t the only thing that makes these babies unique. Unlike many other species of animals, these newborns don’t depend on their mothers for meals. Instead, they instinctively know how to hunt, catch, and eat tiny insects.

Can you imagine leaving a newborn baby to fend for itself from the moment of birth? Since many babies are born defenseless, it can be tough to fathom. However, chameleon babies don’t interact with their mothers. In fact, the only role that a mother chameleon plays in the birth of her babies is laying and concealing the eggs.

Most female chameleons dig a deep hole, lay their eggs, and cover the opening with dirt. Then, they walk away… forever! So, what happens to the chameleon hatchlings once they break free of their shells? Luckily, chameleon young are well-equipped for independent life from their very first breaths.

One of the most helpful abilities that newborn chameleons have is the ability to walk. Unlike some other baby animals, chameleons don’t need to work up the strength to take their first steps. Instead, they’re able to walk, and even run just moments after they’re born.

Once they claw their way to the surface, they don’t waste any time getting to safety. Due to their small size and lack of strength, they’re extremely susceptible to predators. This means that the safest place for a baby chameleon is in the trees, which is usually where they scurry to and spend their first few weeks of life.

There’s just something about baby animals’ size that makes them so much cuter! If the tininess of an animal inherently made it cuter, the Pygmy Chameleon might be one of the cutest animals in the world! Fully grown, their entire body is smaller than the tip of a matchstick.

An adult Pygmy Chameleon measures an astounding small three to four inches on average. As babies, they are even tinier, with a median length of around one inch. That means that a baby Pygmy Chameleon could comfortably fit on the face of a quarter with plenty of room to move around. That’s ridiculously small!

Perhaps one of the most prominent defining features of a baby chameleon is its tail. Their tails are called prehensile tails, which means that the appendage can be used to grasp objects. The chameleon species that have these tails use them to balance themselves on branches, hold objects, and even express their moods!

When not in use, chameleons with prehensile tails coil them into a spiral at the base of their bodies and rest. However, the Brookesia Micra chameleon does not possess such a tail. These chameleons are also extremely small, measuring in at about one inch from nose to tail. Instead of a long, curly tail, this species’ tail is more like a stump.

Even though Brookesia Micra may not be able to use their tails to hold things, it’s still an important body part. It is often used as an extra leg to help the chameleon climb trees and gain balance.

What are baby chameleons called?

How much do baby chameleons weigh?

The weight of a baby chameleon depends on its species. Baby Brookesia Micra, for example, weighs less than a penny at birth. Many other species such as the Panther Chameleon and Jackson’s Chameleon weigh around 1/10 of an ounce at birth.

What do baby animals eat?

Baby chameleons don’t depend on their mothers for food and begin hunting for and eating their own food very quickly. Typically, they absorb their yolk sac during their first few days of life, which sustains them until they can gain the energy to look for tiny bugs to eat.

Where do baby chameleons live?

Most chameleons are found in rainforests and deserts in Africa, with Madagascar having a large percentage of the population. 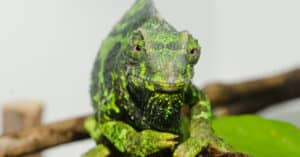 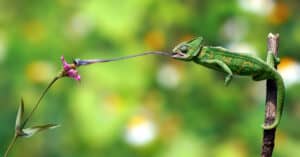 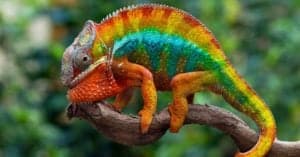