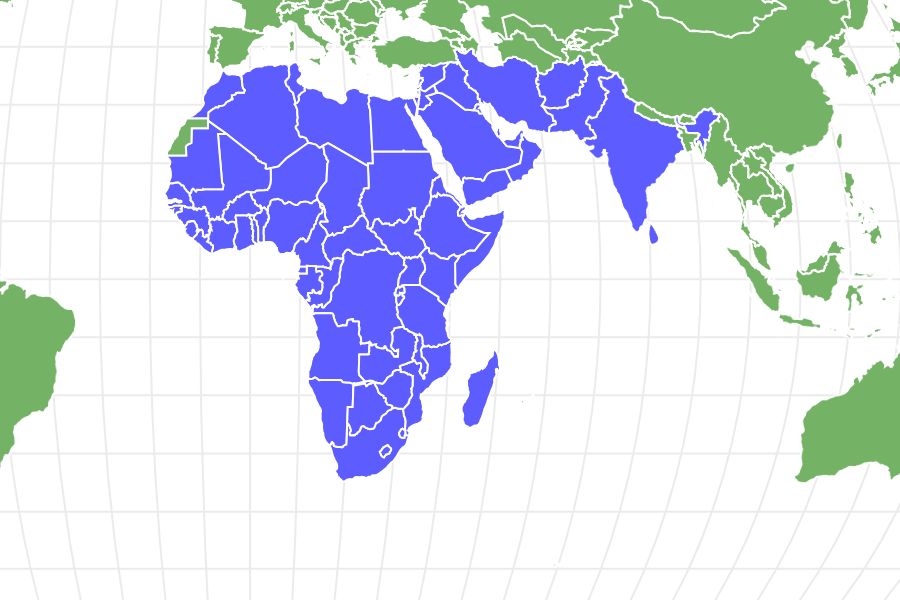 View all of our Chameleon pictures in the gallery.

View all of the Chameleon images!

Can change color to pink, red, green, yellow, turquoise, and other colors!

The chameleon, scientific name Chamaeleonidae, is a species of lizard. There are over 160 species of these lizards spread across Madagascar, Spain, Africa, Asia, and Portugal. They have large eyes, a curled tail, and some species can change the color of their skin to blend in with their surroundings as a defense mechanism from predators. These lizards can change their skin to be pink, blue, red, orange, green, black, brown, light blue, yellow, and turquoise.

Chameleons are animals that are found throughout jungle and desert alike, in Africa, Asia, and parts of Southern Europe, and chameleons have also been introduced to parts of North America. Most of these lizards live in trees or in bushes. Only a few species live on the ground under piles of leaves.

There are many animals that eat these lizards. In fact, the smaller a chameleon is, the more likely it is to be eaten by a larger animal. Some of the predators include snakes, birds and sometimes monkeys. Though they can blend in with their environment, they are near the bottom of the food chain. This means there are many animals above them on the food chain that can eat them.

A Chameleon’s Defense Against Predators

A chameleon’s ability to change color to match its environment is its way of protecting itself when a predator is nearby. If this lizard is on a branch, its skin can turn a color that is very close to the color of the branch. Many predators may pass by without ever seeing the animal sitting quietly on the tree branch.

Body Language of a Chameleon

Chameleons are animals that communicate with one another by using their body language. For instance, a chameleon trying to protect its territory from an intruder is likely to turn sideways. This makes the lizard look bigger and more threatening. A chameleon that feels threatened may open its mouth to try to scare another one away.

Most species of these lizards lay eggs while a few have live babies. The female digs a hole in the ground and lays her eggs inside it to keep them warm. Usually, they lay around 20 eggs, but it can be more or fewer depending on the species. It can take four months to a year for the eggs to hatch. The Jackson’s chameleon is one example of a species that has live babies. This lizard can have from 8 to 30 live babies after being pregnant for about 6 months.

Chameleons eat a diet that’s mostly focused on insects. While chameleons are omnivores that will feed on vegtation such as dandelions and other vegetation, most their prey is insects such as grasshoppers, crickets, and dragonflies.

For a full list of chameleon diets, give our ‘What Do Chameleons Eat? 16 Foods in their Diet‘ page a read!

There are some species of chameleons that are endangered. A couple of examples include the tiger -and the Elandsberg dwarf chameleon. These animals can become endangered for many reasons such as loss of their habitat or pollution.

The Meaning Behind the Name

The word chameleon comes from the Greek words chamai which means on the earth and leon which means lion. So, the word means earth lion.

These lizards have excellent eyesight. They can see up to 32 feet in front of them. This makes it even easier to spot crickets, snails, and other types of prey. They also have complete 360-degree vision around their body! This special adaptation allows them to hunt prey and spot predators more effectively.

Though this lizard has excellent eyesight, it can’t hear very well. Like snakes, they can hear sounds at certain frequencies but depend on their eyesight to catch insects.

Chameleons have five toes on each of their four feet. These toes help them to climb trees so they can sit in the highest branches. A chameleon’s five toes work kind of like a human’s thumb and fingers. Chameleons also have a tail that can wrap around a tree branch helping them to climb without falling. This reptile has the ability to change the color of its scaly skin. Some chameleons can display bright reds and yellows while others can turn green, black, brown or gray. A chameleon’s color can change with its emotions. It can turn one color when it’s angry and another when its afraid. A chameleon’s range of colors depends a lot on its species. This reptile has a long tongue with a sticky surface used for catching its food. Also, it has eyes that can move in separate directions. This allows a chameleon to see all around it.

What Does a Chameleon Eat?

The chameleon is generally an omnivorous animal, although some chameleon species are known to have a more carnivorous diet, and other chameleon species prefer to be vegetarians. A chameleon will generally eat anything though including berries, leaves, fruits, insects, worms, snails and some of the larger chameleon species will also hunt small reptiles. A chameleon that eats insects uses its long, sticky tongue to grab the locusts, grasshoppers, snails and crickets they see. Since many chameleons move very slowly, their long tongue can get them something to eat without needing to chase it. Once the insect goes into a chameleon’s mouth, it is crushed by the reptile’s powerful jaws. Larger varieties of chameleons have been known to eat small birds.

Does a Chameleon Drink A Lot of Water?

A chameleon doesn’t drink a large amount of water but does need constant access to it. A chameleon living in a forest drinks drips of water off the leaves of trees after a rainstorm. Most chameleons look for dripping water instead of looking for a pool on the forest floor.

How Big Are Chameleons?

The size of a chameleon depends on its species. A Malagasy giant chameleon measures about 27 inches while the Leaf chameleon is only a half inch long. Both of these chameleons live in Madagascar. While some chameleon species weigh less than a pound, others can weigh two to four pounds. The Parson’s chameleon is about the size of a house cat!

How Long Do Chameleons Live?

In the wild, chameleons can live for about four to eight years. Chameleons that are cared for in a zoo can live up to ten years.

Do Chameleons Make Any Sounds?

Chameleons do make sound. Many species make a hissing sound if they are angry or feel threatened by something in their environment.

Do Chameleons Live in Groups?

Chameleons do not live in groups. They prefer to sit alone in the trees and in bushes. Chameleons do get together in order to mate, but otherwise they are known as solitary animals.

Although many types of chameleons are sold in pet shops, they don’t make the best pets. These reptiles require a certain environment to enjoy a healthy life. It’s hard to create an environment like that in an aquarium. Plus, they need a special diet to remain healthy.

Do Chameleons Shed Their Skin?

What Kingdom do Chameleons belong to?

Chameleons belong to the Kingdom Animalia.

What phylum do Chameleons belong to?

Chameleons belong to the phylum Chordata.

What class do Chameleons belong to?

Chameleons belong to the class Reptilia.

What family do Chameleons belong to?

Chameleons belong to the family Chamaeleonidae.

What order do Chameleons belong to?

Chameleons belong to the order Squamata.

What type of covering do Chameleons have?

Chameleons are covered in Scales.

In what type of habitat do Chameleons live?

What are some distinguishing features of Chameleons?

Chameleons have exceptional vision and the ability to change their skin color.

What are some predators of Chameleons?

Predators of Chameleons include snakes, birds, and mammals.

What is the average clutch size of a Chameleon?

What is an interesting fact about Chameleons?

There are more than 160 different species of Chameleon!

What is the scientific name for the Chameleon?

The scientific name for the Chameleon is Chamaeleonidae.

How fast is a Chameleon?

A Chameleon can travel at speeds of up to 21 miles per hour.

How to say Chameleon in ...