The baby otter is an astounding creature with a reputation for being playful, energetic, and fun. Did you know that a baby otter is called a pup or that they can’t swim as newborns? Keep reading to learn five interesting otter pup facts and to see some adorable pictures!

A baby otter is called a pup. Sometimes, they can also be called kits or kittens. A mother otter can give birth to up to three babies at once. When more than one baby results from a single pregnancy, the group of siblings is called a litter!

If you’ve ever seen a baby otter at the zoo, chances are you’ve seen how eager they are to play in the water. Consequently, it can be hard to imagine that an otter kit can’t swim immediately. The fact is that baby otters don’t swim until they are several months old.

You might be wondering how otter pups can survive when their parents spend so much time in the water. Even though they can’t swim, they are buoyant. This means that they can float on the surface of the water without going under.

When a mother otter must leave her baby to hunt, she will use kelp or seaweed to anchor her pup to land until she can return. Otters are also very smart and can build makeshift playpens out of branches, logs, and other materials. This helps to ensure the otter pup stays protected and safe while its mother is away.

Otter kittens learn to swim from their mothers between four and nine weeks old, depending on their species. Surprisingly, the tiny mammals are not eager to learn how to swim when the time comes. Instead, they are fearful of the water, so mother otters must drag babies into the water the first few times.

After the kits get more familiar with the water, they get plenty of practice learning how to swim. While they’re learning, they spend around five to six hours in the water before taking an hour to rest. Then, it’s back to the water. Talk about a busy day!

#3: River Otter Kits Use their Poop to Communicate

What would you do if someone invited you to a poop party? That might not sound very appealing to humans, but to river otter babies, pooping is a social activity.

River otters poop along the sides of river beds in areas called latrines. While pooping, they engage with each other by grooming, playing, and even chatting. What’s even more interesting is the information river otters get from the poop of other otters in their social circle.

Baby otters can use poop to determine a peer’s health, readiness to conceive, and who the most eligible bachelors are in the group. They can even distinguish one otter’s poop from another. This means that poking around in the latrine tells otters everything they need to know about who’s near.

Otter families are similar to human families in many ways. For example, the father, mother, and even otter siblings have a hand in caring for a baby otter. What’s even more extraordinary is that the preparations for otter pups start far before they’re born.

When a female otter falls pregnant, she and the father start straightaway to get ready for the birth of their little one. Since the tiny otter will need plenty of attention, they will not be able to leave the nest often. Consequently, they spend plenty of time stocking up on food.

As otters grow up, their older siblings play a more active role in their lives These otter siblings often play, teach, and even babysit their little brothers and sisters. Father otters are also an important part of the dynamic since they protect the mother otter, baby otter, and siblings from danger.

When otter kittens are born, they are smaller than you might expect! At birth, they only weigh about two ounces and measure between 22 and 24 inches long. They are also born completely blind and won’t open their eyes until they are 30 to 40 days old.

Due to their size and inability to see, baby otters are extremely dependent on their caregivers to survive. They won’t venture away from their family until they are about a year old. It is at this time that mother otters will get pregnant with another litter.

Female otters continue to have babies about once a year from the time they are adults until they’re too old to carry babies. A single female otter can have 200 or more babies throughout their lifetimes.

How much do baby otters weigh?

Baby otters can weigh anywhere from two to four ounces and measure between 22 and 24 inches long.

What do baby otters eat?

Otter kits are mammals, which means they depend on their mother’s milk to survive for the first several weeks of their lives. When they are around four to six weeks old, they start sampling solid food. Otters are carnivores and enjoy a diet of crawfish, fish, and other aquatic life.

Where do baby otters live?

Baby otters can live on the water and land. Most otters give birth on land, except the sea otter, which has its babies in the water. Otters can burrow into their dens or can often be found living in abandoned beaver dens, as well.

What is a baby otter called?

A baby otter is called a kit, kitten, or pup! They share these names with many animals like skunks, bears, and even cats! 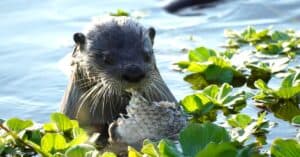 What Do River Otters Eat?