Click through all of our Otter images in the gallery. 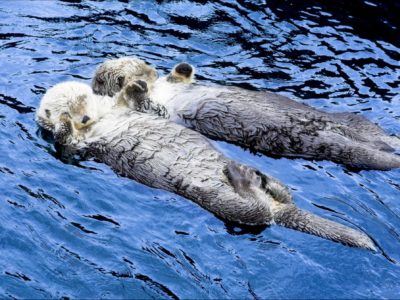 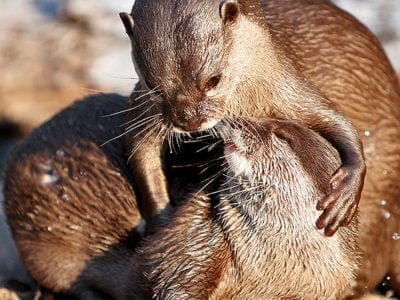 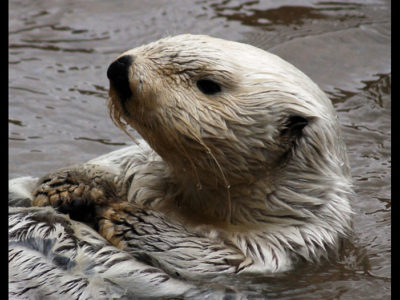 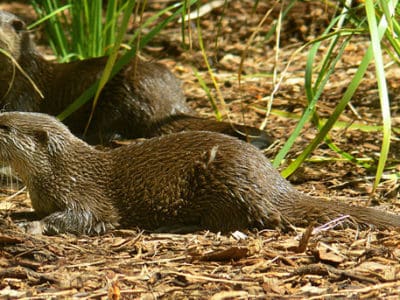 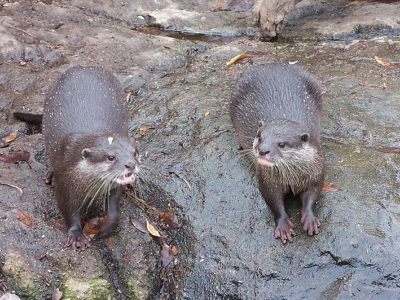 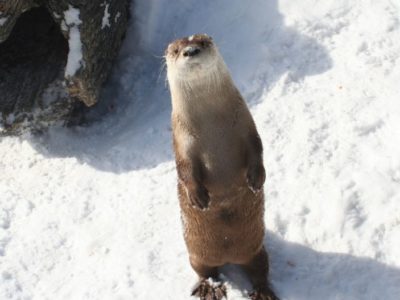 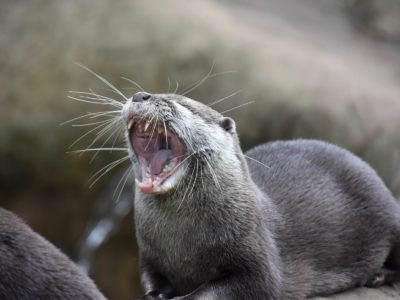 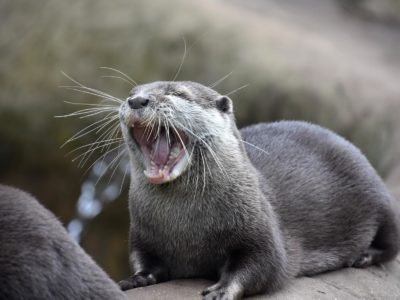 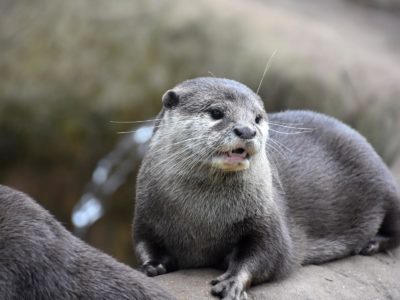 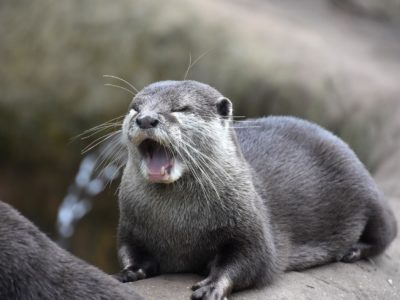 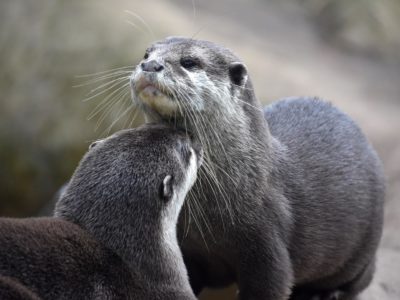 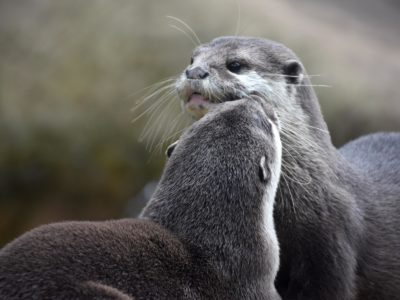 View all of the Otter images!

Just like many people, there are giant otters that are considered chatterboxes for their species. Though they can’t form words, they have a vocabulary that consists of 22 recognizable noises. Each noise is used to address a different type of situation. This is how giant otters effectively communicate with each other.

The taxonomy of otters puts them as the L Canadensis species. The scientific name for an otter is Carnivora, with otter being its common name. It belongs to the weasel family and its subfamily is the Lutrinae. The classification it falls under is Mammalia.

In total, there are 13 different species of otters. While the giant is the largest, its polar opposite is the small-clawed. Two of the species of otters are water animals, known as the sea otter and the marine otter. The other 11 species are river otters.

The first time otters were called otters was in 1913. They were listed as being among the wild animals to be found in California. Dating back over a century, otters used to be referred to as land otters as opposed to river otters.

Otters are animals that are known for being slim and short. They have a muscular neck and short legs. Their long flat tails and four webbed feet help them swim faster. They have short noses and ears and their fur is brown, soft and thick. Their outer fur varies in its shade of brown, with the fur underneath being lighter. Having two layers of fur keeps them warm and dry. On each square inch of their body, they may have as much as one million hairs.

In the Southern Pacific Ocean, the world’s smallest otters, Chungungos, can be found. The world’s largest otter to date was found in the Big Fish, a body of water in Maine. While most otters are an average size of 40 inches (or half Michael Jordan’s height,) this one was 76 inches long, making it approximately as tall as Michael Jordan is.

Otters enjoy being together. They live as families that consist of a mother and her offspring. When they are not eating or sleeping they can be seen playing and often choose the bank of a river to turn into their own sliding board.

Groups of otters that are in the water are referred to as a raft. When they are in a group, but out of the water, they can be referred to as a bevy, romp, or lodge. Adult otters may become defensive if they feel like their offspring is being threatened.

There are many places in the world where otters live. They prefer a wet habitat and often make their home on coastlines, lakes, oceans and freshwater rivers. Most choose to live in dens that beavers and other similar animals build. These dens are found underground and include various inner chambers that keep them dry.

When it comes to sea otters, water is their preferred habitat to land. They make their home on central California’s coast, as well as Alaska and Russia’s Pacific Coasts. Otters will often retreat to giant kelp forests away from shore.

The biggest threat to otters is people because hunting them is a common activity. It is so common that certain species have been greatly depleted as a result. People have been hunting these animals for a long time. When they started, homemade weapons and arrows were used. As killing them became more popular, hunters started to set traps and shoot the otters that fell into them. These days most people only use traps to catch an otter.

Commercial fishermen have been hunting this animal for a long time. The reason is that the natural diet of an otter means less marine animals for fishermen to catch. Some fishermen catch them without meaning to because the otters enter their fishing net.

Land and water predators are also a threat. Coyotes pose a danger to them and so do eagles. In some parts of the world, water lions are a threat to otters. Another significant threat is killer whales and sharks. In areas with swampland, another threat is crocodiles and alligators. Those that live in the wild are often hunted by bobcats.

Due to the many predators of otters, there are several species that are in danger of becoming extinct. This is because of the loss of habitat and air/water pollution is having a negative effect on them. The IUCN Red List includes water-based otters on their list of animals that are endangered.

In Asia, the existence of otters is threatened because of the illegal trading of them. The only type of otters not in danger of extinction are those that live in the waters of North America.

When an otter is between the ages of two and three, they are old enough to reproduce. Those in different regions of the world mate for different reasons. In ideal conditions, they can reproduce multiple times during their reproductive season. Those conditions are an abundance of food and a comfortable place to reproduce.

North American otters mate from late into winter and through the beginning of the spring season. Not all otters breed in the same way. Some breeds take longer to have babies than others. When the egg is fertilized in a pregnant otter something happens called delayed implantation. This means that the egg won’t become attached to the mother’s womb until the environment is suitable for an otter to give birth in. These are the otters that are pregnant for 63 to 65 days before giving birth.

When a male is ready to reproduce he will seek out a female companion. Males and females do not generally grow up together. The only exception is that when they are babies a male will stay with their mother.

In some cases, females will be able to reproduce again immediately after giving birth. Yet this is not a common practice. Females would rather nurse their babies to adulthood before having more. If a mother loses one of her babies she may not want to wait to reproduce again. She may choose to do it right away. The only exception to this is if the mother otter lives in an environment that isn’t stressful.

During the mating season, males go to where they know the females will be. A male cannot mate with a female until she approves of doing so. Sometimes a male will find another female if they feel one won’t approve.

If a female otter wants to mate with a specific male, she will roll around and play with them. Playing together releases the female hormone needed for reproduction. Sometimes a male will bite his female companion’s nose if he wants to reproduce with her.

These activities are done on dry land, but otters mate in the water. Once babies have been conceived the mother otter is pregnant for different amounts of time, according to her species. The shortest pregnancy is 60 days while the longest is nine months.

When they are born, a mom will give birth to between one and six pups. If they have a water birth it takes place on kelp. Babies may also be born in an otter’s den. Until new pups are one month old they cannot see. They depend on their mother for everything. A pup will not leave their den until they are able to see. After they gain the ability to see, the mother will teach them how to swim in the water.

Certain types of otter babies are born with growing teeth and all of their fur. When they are born their average weight is five ounces, about the same as a baseball.

At four months old, pups can begin to eat solid foods. This is when they start learning how to hunt. Pups are so fragile that 32% of them won’t survive until their first birthday. Even adult female otters don’t always survive long enough to be able to mate.

Baby otters are also called whelps and kits, in addition to pups.

View all 12 animals that start with O

Are otters carnivores, herbivores, or omnivores?

Since otters eat meat, they fall into the category of carnivores.

There are times when otters can be dangerous. If humans approach their babies, they will aggressively protect the pups. If they want to, they can overpower smaller children as well as most pets. They carry rabies and can transfer it to people or to pets.

In general, otters are not overly friendly to people. Though they may seem that way, it is not always the case.

At times an otter will eat an alligator. If they find themselves near one, an otter may attack an alligator because it sees it as food.

What do otters do?

Otters often attack marine animals with hard shells so they can eat them.

Otters are known for being smarter than many other animals. Some people even believe that they are smarter than dolphins.

Do otters mate for life?

It is not unusual for otters to mate for life. They are known to remain with their otter partner for their whole life, just like human couples do.

What Kingdom do Otters belong to?

Otters belong to the Kingdom Animalia.

What phylum do Otters belong to?

Otters belong to the phylum Chordata.

What class do Otters belong to?

Otters belong to the class Mammalia.

What family do Otters belong to?

Otters belong to the family Mustelidae.

What order do Otters belong to?

Otters belong to the order Carnivora.

What genus do Otters belong to?

Otters belong to the genus Lutra.

What type of covering do Otters have?

Otters are covered in Fur.

In what type of habitat do Otters live?

What is the main prey for Otters?

What are some predators of Otters?

Predators of Otters include birds, foxes, and wolves.

What is the average litter size for an Otter?

The average litter size for an Otter is 3.

What is an interesting fact about Otters?

There are 13 different Otter species worldwide.

What is the scientific name for the Otter?

The scientific name for the Otter is Lutra Canadensis.

What is the lifespan of an Otter?