Think of a fancy, white tablecloth, candlelit dinner. Is there a lobster on the table? Lobsters are very interesting, and very tasty, animals! They are an important commercial product and are important contributors to their ecosystems around the world. Their heavily muscled tails and large pincers make them easy to recognize both in the wild and on a dinner menu. This article will explore where lobsters fit in the animal kingdom and will explore all the details of the largest lobster ever caught!

What is a lobster?

To appreciate the relative size of the largest lobster ever caught, let’s first understand what is typical of lobsters. They are crustaceans, which is a subgroup of arthropods. Lobsters are the largest arthropods by weight in the world! Other crustaceans include crabs, prawns, krill, woodlice, crayfish, and barnacles. Most lobsters weigh up to 15 pounds and are 9.8-19.7 inches long. They inhabit all oceans around the world and live solitarily in rocky crevices or burrows. Lobsters typically live between 40 and 50 years old, however accurately determining the age of wild lobsters is difficult. Interestingly, lobsters have blue blood due to the presence of copper-containing hemocyanin in their bloodstreams.

Lobsters are omnivores and have a relatively broad diet. They typically eat other crustaceans, worms, mollusks, fish, and some vegetation. There have been observations of cannibalism in captivity and in the wild, but this is rare. Misinterpretations of cannibalism can result from examining the stomach contents of lobsters who consume their shed skin after molting, which is common. Lobsters are prey to humans, a variety of large fish, other crustaceans, and eels. For a full description of everything lobster, read here.

Where can you catch lobsters?

Lobsters, including the largest lobster ever caught, are commonly fished in North America, especially the northern Atlantic Ocean. In Maine, lobster fishing accounts for $450 million! Nova Scotia, Canada is the self-proclaimed lobster capital of the world and is home to the largest lobster ever caught. California spiny lobsters are common off the pacific coast and are very popular amongst recreational fishers. In North America, it is most common to fish lobsters using a baited one-way trap, called a lobster pot, with a color-coded buoy.

Different lobster species of the Atlantic Ocean are also prolific in waters off of the United Kingdom, Norway, throughout other European countries, and north Africa. A number of lobster species less prominent in global commerce also exist off the coasts of Australia and New Zealand.

Lobster fishing, both by amateurs and for commercial purposes, can occur with many different techniques. In addition to the lobster pot, lobster fishing can include trawling, gill nets, hand-fishing, and spearfishing. Trawling and gill net usage have heavy restrictions and in many countries are only for commercial use. Many countries also have a maximum limit of lobsters that one can fish recreationally.

What is the largest lobster ever caught?

The largest lobster ever caught weighed a whopping 44 pounds and 6 ounces! This lobster was an astonishing catch made in Nova Scotia, Canada in 1977. This enormous crustacean was around 100 years old according to the Maine Department of Marine Resources! Lobsters continue growing throughout their life, so a longer-lived lobster has the potential to grow well above average sizes. The record-holding Nova Scotian lobster belonged to the species Homarus americanus, also known as the American lobster. Despite its size and large amount of meat, this gargantuan biggest lobster ever was never eaten.

5 of the largest lobsters ever recorded

Lobsters can get so big in part because they never stop growing. Humans produce an enzyme named telomerase in the early stages of life that aids in growth; however, lobsters never stop producing this enzyme. That means that the biggest lobsters ever are also the oldest.

If lobsters never stop growing, why aren’t even more massive lobsters found? In short, as lobsters age the energy required to molt becomes too great and they stop shedding. With a rapidly aging exoskeleton, lobsters become prone to infections and scar tissue fuses their shells to their body. This combination causes most lobsters to perish before they reach truly enormous sizes.

Yet, massive lobsters do exist. Let’s take a peak at five of the largest lobsters ever recorded.

How are lobsters doing today?

Increasing unsustainable fishing practices pose a great threat to global lobster populations. Implementing quantative limits on lobster harvest around the world, however, provides hope that populations will grow generationally. The foremost commercial species of lobster are the American lobster (Homarus americanus) and the European lobster (Homarus gammarus). Both species have a conservation status of Least concern.

Lobsters have also been a point of contention regarding ethical methods of animal butchery. Historically, boiling lobsters alive before preparation has been commonplace. This practice is illegal in some countries including Switzerland since 2018, where lobsters must die instantly or be unconscious before preparation. Devices exist to electrocute and stun lobsters before killing them and constitute a more humane approach. Pithing, inserting a metal rod into an animal’s brain, is also an inhumane practice widely condemned. A lobster’s brain is complex and has three ganglia. Damaging the frontal ganglion with pithing will not kill the lobster, only maim it. In the United Kingdom, few laws exist that protect invertebrates. Parliment is reviewing the Animal Welfare (Sentience) Bill in 2021 so it may protect lobsters from cruel methods of preparation if scientists prove they are sentient.

What’s the Coldest Temperature Reindeer Can Live In? 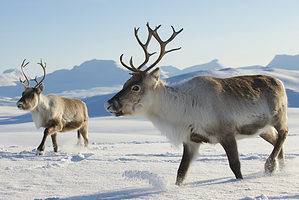