A highly venomous pit viper species, the Mojave rattlesnake, has one of the world’s most potent rattlesnake venom. With the characteristic features of a typical rattlesnake, an average adult of this species weighs about 6 to 20 pounds and has an average length of 3.3 feet (100cm). But some species have been found to grow up to 4 feet and even longer. So, what is the largest Mojave rattlesnake ever recorded? Find out in this article.

Mojave rattlesnakes are most active from April to September. Breeding season in this species starts from July through September, when female Mojaves usually bear 2 to 17 (averagely about eight) live young ones. Mojave rattlesnakes exhibit certain behaviors in different seasons. They are mainly nocturnal and hide in rodent burrows or under rocks during the day’s heat. But on cooler days, they may be seen basking in the sun. They brumate alone or in small groups during the winter. Although known as an aggressive species, they are timid and like to be left alone to go their way. So, they strike vigorously to defend themselves when disturbed or threatened. Like other rattlesnakes, they shake their tail and produce a buzzing sound to warn an intruder before striking.

Even though the Mojave desert is presumed to be the only place you can find this species, that’s very far from the truth. Mojave rattlesnakes are frequently found in many other locations in the United States, ranging from California to west Texas and extending to Querétaro in Mexico. They’re widely distributed across the southwestern region of the United States in southern California, Nevada, most of Arizona, extreme southwestern Utah, southern New Mexico, and some parts of Texas. Their range also extends southward through most of Mexico into south Puebla.

Being ambush predators, Mojave rattlesnakes are carnivorous. They eat mostly toads, birds, mice, rats, and rabbits. They are significant predators of lizards and many small rodents, constituting a major part of their diet. But at the end of the day, the hunter also gets hunted. Mojave rattlesnakes are preyed on by other snakes like the California kingsnake, as well as other mammals and birds of prey.

The Mojave rattlesnake is considered the world’s most venomous rattlesnake. Its venom is about 16 times more toxic than that of the extremely fast sidewinder and surpasses even that of the tiger rattlesnake. Subspecies of Mojave rattlesnake have both neurotoxic (affecting the brain and nervous system) and hemotoxic (destroying the muscle and tissues) venom, considered one of the most potentially deadly of all rattlesnakes. However, chances for survival are dramatically increased if medical attention is sought as soon as possible after a bite.

The Mojave rattlesnake population has two types of venom; Type A and Type B (Some snakes exhibit both types). In people bitten by a Mojave rattlesnake with venom A, the onset of serious signs and symptoms is often delayed. Nonetheless, when a significant quantity of venom is delivered, the victim may experience vision abnormalities, difficulty swallowing and speaking. In severe cases, skeletal muscle weakness can lead to difficulty breathing and even respiratory failure. Contrary to popular belief, fatalities are uncommon, and this is due to the wide availability of antivenom. Venom B, on the other hand, causes pronounced proteolytic and hemorrhagic effects, similar to the bites of other rattlesnake species. Risk to life and limb is still significant, as with all rattlesnakes, if not treated as soon as possible after a bite.

The average lifespan of a Mojave rattlesnake is 12.5 years, and they survive for almost 20 years in captivity.

Luckily, there are no major threats facing the Mojave rattlesnake presently. This species is classified as Least Concern on the IUCN Red List of Threatened Species. According to the IUCN, they are listed “least concern” due to their wide distribution and stable population.

What is the Largest Mojave Rattlesnake Ever Recorded?

Mojave Rattlesnakes are medium-sized snakes, and adults of this species usually grow to an average length of 2 to 4 feet, with a maximum of 137.3 cm (4.50 ft). The largest confirmed Mojave Rattlesnake ever recorded measured 4.5 feet long (54 inches).

Incrediball® Hydrangea vs. Limelight Hydrangea What Are the Differences? 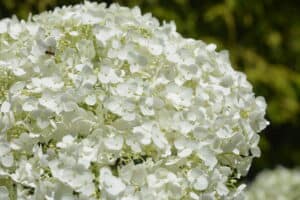