There are more than 50 different species!

Click through all of our Rabbit images in the gallery. 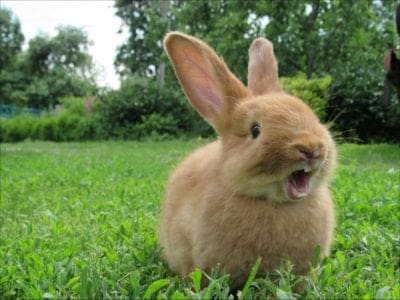 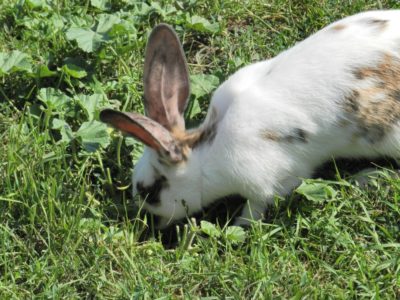 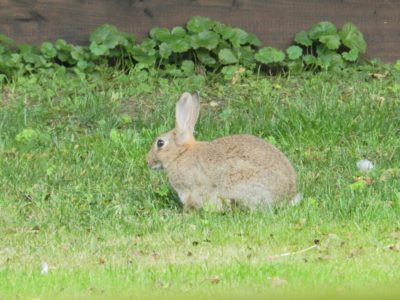 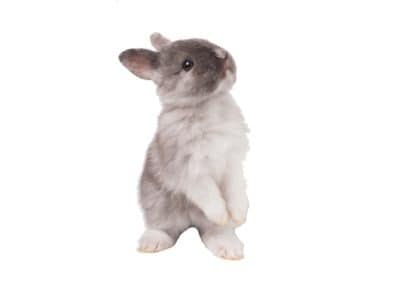 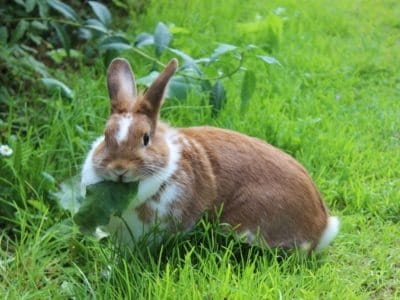 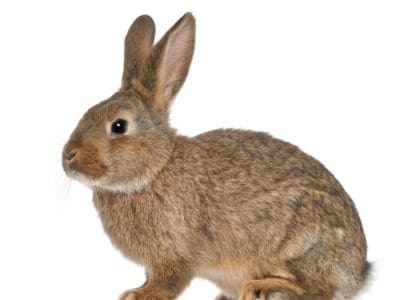 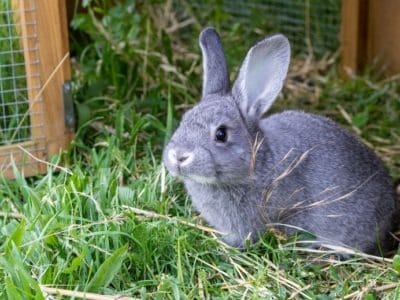 View all of the Rabbit images!

Rabbits have been domesticated since Roman times, and possibly even from before that.

Rabbits really do breed like rabbits. The female is ready to breed almost any time, and she’ll have a litter of babies about 30 days after breeding. These herbivores eat a diet of mostly green foods, but they are also opportunistic feeders that will eat seeds, fruit, and bark. They live in large groups in underground tunnels called warrens with anything from a few to dozens of roommates.

1. A rabbit can’t vomit.
2. A rabbit can see nearly 360 degrees around him.
3. Rabbits live in underground tunnels called warrens.
4. Rabbits can jump nearly 10 feet in a long jump.
5. A rabbit’s teeth grow throughout its lifetime.

The list of taxonomy includes rabbits such as Oryctolagus cuniculus, which is the scientific name that covers all pet rabbits. In this name, the word Oryctolagus represents the genus name and cuniculus is the species. Some of the other rabbits covered in the taxonomy here include the genus Nesolagus, which covers the Sumatran striped rabbit, Nesolagus netscheri, and the Annamite striped rabbit, Nesolagus timminsi.

The rabbit’s appearance is an animal that sits on its large hind legs and has shorter front legs. The animal also has large ears that vary in size based on the type. The hare looks similar to the rabbit but is not the same. These ears are used to radiate heat into the air when the animal has been running or is otherwise excited or when it lives in the wilderness and needs to use its ears to maintain its comfort. They can also be turned to listen to sounds to determine where a predator might be coming from or to make sure that an area is safe.

These animals come in a variety of sizes. Pygmy rabbits grow to only eight inches long and weigh in at less than a pound, even when fully grown. Chinchillas are at the other end of the scale, weighing in at about 16 pounds. Most Flemish giants stop at about 22 pounds, but one rabbit, also a Flemish giant, beat all the rest by weighing in at 49 pounds and stretching 4 foot, 3 inches long.

Rabbits hop by bounds, moving quickly over terrain when they need to escape from predators. They can also freeze in place when they need to. This sometimes results in a failure of the chase, letting the animal go free for another day. It all depends on the situation at the time.

When rabbits eat, they will often graze heavily for the first half an hour or so, then switch to eating their own poop pellets as they are excreted. They need to do this to get the benefit of their food as they eat. Eating partially-digested poop is an important way they accomplish this. They will often take the food from their anuses and chew it again to get the benefit of it. These animals cannot vomit, so if they eat too much of the wrong thing they can end up dying from it.

These animals live in large groups known as warrens, living under the ground in spaces carved out by them as they move in. They typically live in these warrens with a group of other rabbits in a meadow, desert, woods, grassland, wetland, or forest. Not all rabbits live in a warren. Some species live out in the open instead.

More than half of the world’s rabbits live in North America, but bunnies are also native to southwest Europe, Sumatra, southeast Asia, some parts of Japan, and in parts of Africa and South America. They are not normally found in Eurasia or in most of South America, though in some cases they may be taken to these places and released.

A rabbit will eat all kinds of soft, grassy foods, including grass, leafy weeds, and forbs. They will also eat fruit, bark, and many other kinds of food that grows in the woods and meadows where they live. They will digest what they can of the food and will then poop out the hard bits in poop that is not eaten. The soft bits are typically pooped out and then eaten again before being done with.

The rabbit digests a lot of its food in the cecum, which takes joins the large intestine to take up about 40% of its digestive tract. The cecum is even bigger than the stomach. The cecum helps to separate the “good” poop from the “bad.” The bad poop is pooped out of the rabbit and the good poop – called cecotropes — is eaten by the bunny and goes back through the rabbit again before being pooped out. While this may seem kind of gross, it is important to the rabbit’s digestive system and is necessary for the animal to survive.

Almost everything that eats meat will eat a rabbit if its big enough. This includes animals such as foxes, wolves, bobcats, eagles, owls, and coyotes. Any of these animals, and more, are sure to grab a rabbit snack if given a chance to do so.

Bunnies will do what they need to do to survive, including thumping on the ground if they feel threatened. Their eyesight also has a good deal of vision devoted to overhead scanning, helping them to avoid birds. If confronted on the ground they will jump into a burrow if necessary or hop away using a zig-zag pattern. Their big teeth will also help them to bite if they are able to. If they can escape, they will live to hunt another day.

Reproduction occurs almost anytime two adults get together since females can get pregnant almost anytime they breed. The male simply climbs on top of the female and breeds her, with no introduction needed. He will breed as many females as he can, but it’s best to give him a break in between breedings so he doesn’t wear himself out.

Once the male, known as the buck, inseminates the female, known as the doe, she will get pregnant and will produce a litter of babies, called kittens or kits, about 30 days. The mother typically gives birth to six youngsters. The babies are born naked and blind, completely dependent on their mother at first, though within a couple of weeks they are strong and ready to run around on their own. They live with their mother for about a month before they are ready to move on. By then she is often pregnant again. They are ready to have babies of their own by the time they are about three months old.

The lifespan of a pet bunny can be very long, with the longest-living rabbit known to have died in Tasmania at 18 years old. By contrast, wild animals such as an eastern cottontail live less than a year. Most rabbits that live in captivity can live anywhere from 10 to 12 years, on average.

Rabbits may develop problems along the way, with diseases such as the pathogens Bordetella bronchiseptica and Escherichia coli being common. They can also contract rabbit hemorrhagic disease (RHD), also known as myxomatosis. They are also vulnerable to things such as tapeworms and external parasites including fleas and ticks.

It isn’t clear how many of these animals exist in the world today, but they are not threatened. They are listed as being of Least Concern on the A to Z animal website, since most places where they live their population is stable, and in many places, it is even on the rise. They are capable of living anywhere that humans can live.

Rabbits in places such as Eastern Australia continue to grow despite human efforts to stop them, and the more baby bunnies that get released the faster the population will grow. Once they have gotten started there isn’t much of a way to stop them, so it’s important to think before you release a bunny into the wild.

View all 33 animals that start with R

Is a Rabbit an omnivore, herbivore, or carnivore?

They eat nothing that doesn’t grow from the ground, except when each baby drinks its mother’s milk for the first month or so of its life. A rabbit is an herbivore.

Is a rabbit an animal?

Yes, a rabbit is an animal.

What is a group of rabbits called?

What species is a rabbit?

What you really need to know here is what species of rabbit you are referring to. A rabbit can belong to many different species, depending on the particular rabbit you are talking about. Most rabbits belong to the group Oryctolagus cuniculus, a group that contains most pet species as well as the European wild rabbit.

What is the difference between a rabbit and a hare?

In general, a rabbit tends to be a bit smaller than a hare. The rabbit also has smaller ears.

How long do rabbits live as pets?

When kept as a pet a rabbit can live about 8 to 10 years though some may live much longer.

Where can you buy a real bunny rabbit?

Most people get their baby bunnies at a pet shop or directly from a breeder. The place you get yours from will depend on the kind of rabbit you are looking for as well as the time of year. Most baby bunnies are much more likely to be available in the spring and summer, with some but not as many being available in the fall and winter.

What Kingdom do Rabbits belong to?

Rabbits belong to the Kingdom Animalia.

What phylum do Rabbits belong to?

Rabbits belong to the phylum Chordata.

What class do Rabbits belong to?

Rabbits belong to the class Mammalia.

What family do Rabbits belong to?

Rabbits belong to the family Leporidae.

What order do Rabbits belong to?

Rabbits belong to the order Lagomorpha.

What genus do Rabbits belong to?

Rabbits belong to the genus Oryctolagus.

What type of covering do Rabbits have?

Rabbits are covered in Fur.

In what type of habitat do Rabbits live?

What do Rabbits eat?

What are some predators of Rabbits?

What is the average litter size for a Rabbit?

The average litter size for a Rabbit is 6.

What is an interesting fact about Rabbits?

There are more than 50 different species of Rabbit!

What is the scientific name for the Rabbit?

The scientific name for the Rabbit is Oryctolagus cuniculus.