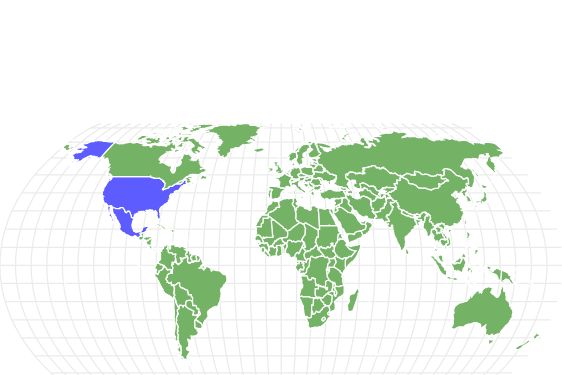 View all of our Mojave Rattlesnake pictures in the gallery.

View all of the Mojave Rattlesnake images!

The Mojave rattlesnake, native to deserts of the southwestern United States and central Mexico, is a pit viper that looks much like the Western Diamondback rattlesnake. The snake hunts lizards, birds and small rodents like the kangaroo rat mostly during early morning, at dusk and through the night using ambush predation and a keen sense of smell. Instead of being aggressive or chasing prey, predators or threats, the snake is actually very timid. It prefers to avoid humans and other animals, but will defend itself and its young using its fangs with precision and lightning speed.

Where to Find Them

Mojave rattlesnakes live primarily in upland desert habitats but also thrive in forests, grasslands and shrubland. Their endemic regions include the southwestern United States and central Mexico. In the U.S., they are found in California, Arizona, Nevada, southern Utah, Texas and New Mexico. Mexican habitat regions include Chihuahua, Sonora, Durango, Zacatecas, eastward to Monterrey, south to Guadalajara and beyond Mexico City.

They prefer open and arid ranges with scrub brush like mesquite, sage, palo verde and creosote. But they also like living among cacti, Joshua trees and grasses. Being nocturnal, the snakes are most typically seen by humans in early mornings when they are coiled beneath bushes or small trees. They usually retreat for daytime into animal burrows or under rocks but rarely choose to live in jagged rocky terrain or areas with little vegetation.

The rattlers are most active from April to September. They brumate alone or in a small group of Mojave rattlesnakes for the winter.

There are two subspecies of the Mojave rattlesnake. These two are differentiated by their range, coloration and venom profiles.

How To Identify Mojave Rattlesnakes: Appearance and Description

The Mojave rattlesnake, including both of its subspecies, typically grows to between 3.3 ft and 4.5 ft in length. The snake has a triangular head common to pit vipers and a black tongue. Its body color is light brown to pale green with a diamond pattern from head to tail along its back. They also feature alternating black and white rings near the tail and its trademark rattler used as an alarm by the snake when it is threatened. Although it closely resembles the Western Diamondback rattlesnake, the Mojave has large scales on the top of its head, between its eyes. Another differentiator from the Western Diamondback is the Mojave’s white tail rings being noticeably larger than the alternating black ones.

How to identify Mojave rattlesnakes:

Mojave Rattlesnake Venom: How Dangerous Are They?

As reported after a study by Clemson University, Mojave rattlesnake venom is more dangerous and deadly than scientists realized in the past. It was previously known that the snake species’ venom used neurotoxins to shut down the body, causing death. But now researchers know that the venom can not only shut down your central nervous system, but it can also “tenderize” your tissues and organs. The potent cocktail of toxins can paralyze the bitten victim, cause major tissue damage, disorientation and blood clotting problems.

If bitten by a Mojave rattlesnake, do not panic. Immediately leave the snake’s area. Lightly wrap the wound with clean gauze or fabric. It is critical to immediately seek medical attention. Either drive yourself to the nearest emergency department or trauma center, or call 9-1-1 for an ambulance or medical evacuation. At the hospital or trauma center you will receive rattlesnake antivenin to trigger your immune system to block the effects of the venom.

Just as important as what to do for a Mojave rattlesnake bite is what you should NOT do. Do not cut the incision, suck out the venom, use a snakebite kit, apply ice, apply electric shock, take medication not provided by an emergency doctor, drink alcohol or drink caffeine.

When threatened, disturbed or protecting its young, the rattlesnake acts defensively. It first uses its rattling tail as a signal of alarm and warning for people to “back off.” At the same time, the snake loosely coils and rises up from the ground in an S-shape to prepare to use its fangs to strike with lightning speed and precision.

If the snake bites, it injects its deadly venom into the intruder, thereby releasing potent toxins into tissues and the bloodstream. Once bitten, humans need immediate medical attention and to receive antivenin. Without this dose of antivenin, victims suffer the damaging effects of the snake venom’s neurotoxins and hemorrhagic toxins and can die.

The Mojave rattlesnake is the most venomous snake in North America. Their venom contains highly potent neurotoxins that harm the nervous system. Other toxins in the venom, called hemorrhagics, attack the blood at the same time. Each snake’s venom can kill 10 adults.

How do Mojave rattlesnake hunt?

Mojave rattlers ambush their prey by hiding and lying in wait for small rodents, lizards and birds to pass by. Then, when the snake detects its prey using its keen sense of smell, it strikes with lightning speed. It injects its fangs into the animal, releasing its venom into their bloodstream.

Mojave rattlesnakes are not aggressive. They prefer to evade predators and threats than to fight them. But they do take a defensive position when threatened and will use their deadly venom against humans and other animals in order to secure their own safety.

Where do Mojave Rattlesnakes live?

These snakes with highly toxic venom are named for the Mojave Desert in which they live. They also live in other deserts of the southwestern U.S. and central Mexico.

What do Mojave Rattlesnakes eat?

Mojave green rattlesnakes primarily eat small rodents, birds and lizards. They also scavenge eggs or rotting meat from carcasses. Sometimes they will eat other small mammals and other snakes, too.

Do Mojave rattlesnakes chase you?

These deadly rattlesnakes are very timid and do not typically chase humans or pets. But they will use their tail rattle to alert people to their presence and as an alarm to “stay away.” If threatened or cornered, the snake will strike out with precision, using its fangs to inject deadly venom. Sometimes a rattlesnake protecting its young or trying to reach a nearby burrow will appear to chase people or animals standing or walking in their path.

Is the Mojave green rattlesnake deadly?

The Mojave green rattlesnake’s venom is highly potent. The precise makeup of one of these snake’s venom and its effects varies from region to region and even snake to snake. But an adult Mojave green has enough toxicity to kill 10 adult humans. Luckily, such deaths are very rare, thanks to advancements in treating the bites using antivenin.

How do you identify a Mojave rattlesnake?

Mojave rattlesnakes are relatively long, growing to an average length of 3.3 ft to 4.5 ft. Their overall body color matches their desert surroundings, ranging from light brown to pale green, with a dark diamond pattern running along the back. Because it is venomous, the viper has a triangular head. As a rattler, it also features a prominent rattle at the end of its tail. 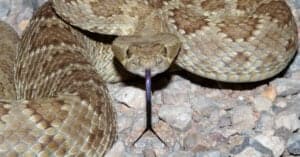