A pika is a tiny, mountain-dwelling mammal that can be found in Asia and North America. They resemble its near relative, the rabbit, but have shorter, rounded ears. They have small, round ears, a fairly round body, an even coat of fur, and no visible tail. The Himalayas and neighboring mountains are home to the large-eared pika, one of the highest mammals, which can be found at elevations of more than 6,000 m (20,000 ft).

The scientific name Ochotona is taken from the Mongolian term ogutun-a, oотно, which signifies pika. The name “pika” appears to have been obtained from the Tungus piika. Any member of the Ochotonidae family, a suborder of the lagomorph order containing the Leporidae, is referred to by this term (rabbits and hares). Ready to learn more about this adorable little animal? Keep reading to discover 10 incredible Pika facts!

1.   They Are Related to Rabbits

The taxonomic order Lagomorpha, which also comprises hares and rabbits, includes the little American Pika. The American pika, though frequently mistaken for a mouse, is actually the tiniest member of the rabbit family. You’ll see why if you pay great attention to their massive rear feet, large round ears, and front teeth.

American Pikas are tough little creatures that reside in the highlands of western North America among rock outcroppings. It does well in chilly alpine regions.

Threats to the American pika are increasing because of global warming. No higher ground exists for the pika to escape to because it is already a highland creature. Many animal and plant species are moving their habitats northward or upward into the mountains as the planet heats.

IUCN lists the pika as a species of “Least Concern.” However, it warns that population declines are unlikely to rebound since pikas rarely repopulate environments they have lost due to extreme temperatures.

3.   Pikas Can Not Survive Cold Weather

American pikas are particularly heat-sensitive and could perish if exposed to 77 degrees or higher for more than 30 minutes. Pikas are a good indicator species for climate change because of this. Pikas do not hibernate; instead, they remain active all winter long, moving through tunnels under the snow and rocks.

Other names for the American pika include whistling hare, mouse hare, and rock rabbit. The similarities between the American pika and rabbits and hares can be seen in its nicknames more than in the way it looks.

It gets the moniker “whistling hare” because of the sharp whistle it emits like a smoke signal when there is danger. On the other hand, due to its propensity to fit in with its rocky surroundings, some people have started referring to it as a “rock rabbit.”

Pikas will live in colonies if they need protection from the elements in their high-altitude habitats. Despite sticking together, the National Wildlife Federation claims that they tend to lead lonely lives and are fiercely protective of their own rock caves and the region around them. Only during the breeding seasons do they break their solitude, typically twice in the spring and again in the summer.

6.   They Gather a Lot of Vegetation for Winter

Pikas spend a lot of time harvesting flowers and grasses for the winter. The National Park Service states that they sun-cure the plants they gather on rocks, then store their stacks under rocks and occasionally move them to avoid getting wet.

According to a Colorado Parks & Wildlife survey from 1990, the average weight of these enormous “haystacks,” as they are known, is a whopping 61 pounds! That is a 10-week accumulation of vegetation equal to 14,000 travels, or 25 trips every hour!

7.   They Have A High Pitch Alarm Sounding Call

Pikas can be identified by their loud “meep” alarm call. They call out, sing, and shout to defend their territory. The National Wildlife Federation claims that the noise they create is more akin to a lamb bleating than a high-pitched squeaky sound. In any case, they use their distinctive call to set boundaries, warn other colony members of an oncoming predator, and occasionally attract mates.

8.   American Pikas Do Not Hibernate

Pikas move through tunnels under the snow and rocks in the winter and are active all year round. They spend the entire summer gathering plants, grasses, leaves, and flowers, drying them in “hay piles” behind big boulders, and then feeding on these food caches during the challenging winter in their high-elevation environment.

9.   They Live High in the Mountains

American pikas once roamed all of North America, according to the National Wildlife Federation, but they have since moved to higher terrain in search of milder conditions. This is because they crossed the land bridge from Asia to Alaska thousands of years ago. They are now only occasionally spotted below 8,200 feet in the more southern territory and dwell in the highest regions of New Mexico, California, Colorado, Oregon, Washington, and Western Canada.

Its tail, which is actually the longest of all lagomorph tails, is hidden by its extremely dense fur. The American pika’s dense fur so flawlessly hides its tail that you’d never know it even existed. The pika tail, however, surpasses both the hare’s shortcut and its rabbit relative’s distinctive cotton ball-like tuft in length compared to its body size. Simply put, it’s hidden too deeply by that heavy winter coat to be seen.

Discover the 10 Oldest Horse Breeds in the World 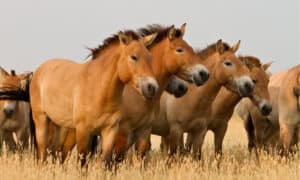