The giraffe (Giraffa camelopardalis) has a tail measuring up to 8 feet. Its body is about 8 feet long as well making it’s tail the same length as its body. Giraffes live on the grasslands and woodlands of Africa in areas such as the Congo, Botswana, and Cameroon.

There’s a long tuft of black hair at the end of a giraffe’s tail it uses when swatting flies. The population of the giraffe has fallen over the last 30 years due to poaching. This animal has a conservation status of Vulnerable. Fortunately, conservation efforts are now in place in many African countries to protect these majestic mammals.

The common thresher shark (Alopias vulpinus) has a tail, or more specifically, a caudal fin measuring up to 10 feet in length. This is the same length as the shark’s body. Common thresher sharks are seen in many areas of the Atlantic Ocean. They travel off the coast of Cuba, southern Brazil, South Africa, and the eastern coast of the United States. They swim in both tropical and temperate ocean water.

Common thresher sharks use their long caudal fin to swipe at their prey in order to stun them. The shark spots prey such as a hake fish or mackerel, swipes with its tail, and eats the fish while it’s still trying to recover from being hit. Common threshers also use their tail to defend themselves against predators such as killer whales. The conservation status of this shark is Vulnerable. It’s hunted for its meat and skin.

The long-eared jerboa (Euchoreutes naso) is a hopping rodent with a tail measuring 7 inches. This doesn’t seem so long until you find out its body is just 3.5 inches long. It has a tail twice the size of its body. The long-eared jerboa lives in a desert habitat specifically in northwestern China and southern Mongolia.

Despite its long tail, this rodent is named for its notably long ears. Its ears are two-thirds as long as its tiny body. The long-eared jerboa uses its tail to keep its balance as it jumps forward and up in the air. The conservation status of this small mammal is Least Concern.

The Eastern glass lizard (Ophisaurus ventralis) has a tail measuring 30 inches in length with a body that’s only 12 inches long. So, it has a tail twice the size of its body plus 6 inches. At first glance, the length of this reptile’s tail makes it look like a snake. They live in North America specifically in the United States including southern areas of Georgia as well as South Carolina. Their habitat includes woodlands and sandy areas near wetlands.

The tail of this lizard can break off during an attack by a predator allowing it to escape. Its tail will grow back over the course of several months or even a year. Their conservation status is Least Concern.

The ring-tailed lemur (Lemur catta) has a black and white ringed tail with a length stretching up to 25 inches. With a body measuring 18 inches, this animal’s tail is the length of its body plus 7 inches. These creatures live in the forests of Africa, specifically in the southwestern region of Madagascar.

This mammal uses its tail in a clever way. Ring-tailed lemurs live in groups aka troops of around 17 members. As they move through their dense forest habitat, they hold their tails straight up in the air. So, if one member of the group takes a wrong turn, it can find its troop by looking for their tall tails! They also use their tails to keep balance on branches high up in the trees. The conservation status of this animal is Endangered with a decreasing population. They are losing their habitat due to land expansion. Also, these animals are captured and sold as exotic pets.

The black spider monkey (Ateles paniscus) has a tail measuring up to 32 inches long. This is notable because its body is just 24 inches long. So, its tail is as long as its body plus an extra 8 inches. These monkeys live in the tropical rainforests of South America.

Black spider monkeys use their tails for lots of tasks. It’s almost like they have an extra arm! They use their tails to grasp food, swing to other branches, and for balance when sitting. The conservation status of this monkey is Vulnerable because of habitat loss.

The Angola colobus (Colobus angolensis) is a monkey with a tail measuring 30 inches long. However, the furry black and white body of this monkey is only 27 inches long. So, its tail is the length of its body plus 3 inches. These animals live in the Congo Basin in Africa. Its habitat is the forests and lowlands as well as the mountains.

The Angola colobus uses its strong tail to move from branch to branch as well as for balance. Its conservation status is Vulnerable and has a decreasing population due to habitat loss.

The leopard whipray (Himantura leoparda) has a tail measuring almost 4 feet long. This makes its tail as much as 3 times the length of its body. Leopard whiprays live in the Indo-West Pacific Ocean off the coast of New Guinea. They live near reefs and are sometimes seen near the shore on the sandy bottom of the ocean.

Leopard whiprays use their tails to steer themselves as they swim. Also, there’s a stinger on it they use to defend themselves from predators. These strange-looking creatures are hunted for their meat and cartilage. As a consequence, their conservation status is Vulnerable with a decreasing population.

This bird’s long, bright white tail feathers are a huge contrast to its black body and iridescent green head. The male uses its tail feathers to attract the attention of the less colorful females during the breeding season. Its conservation status is Near Threatened with an unknown population. These birds are hunted for their feathers. Also, they are experiencing habitat loss due to deforestation.

The male long-tailed widow bird (Euplectes progne) is the animal with the longest tail in relation to its body. It measures 3 feet which is four times the length of its 9-inch body! They are found in Botswana, Namibia, and other countries in Southern Africa. They live in swampy grasslands.

The male flutters and spreads its long tail feathers to attract females during the breeding season. It’s no wonder this bird sometimes goes by the Zulu name Sakabula meaning ‘show-off.’ This bird has a conservation status of Least Concern.

Next up: Cicada Brood X 2021: What is it and should you be concerned? 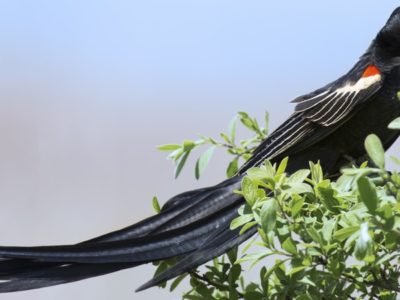 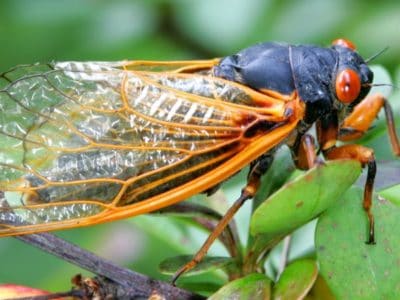 Cicada Brood X 2021: What is it and should you be concerned? 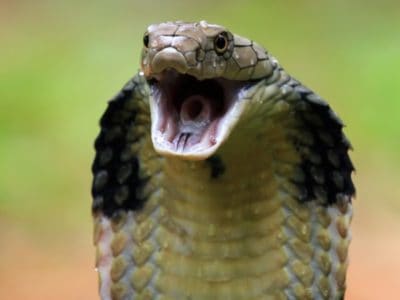