Locusts in Texas: When Do These Noisy Bugs Appear?

Written by Taiwo Victor
Updated: November 3, 2022
© Mark Brandon/Shutterstock.com
Share this post on:
More Great Content:
What Kills Bed Bugs Instantly?
How To Get Rid of Roaches Overnight
Carpenter Ants vs Black Ants: What’s the…
Where Do Bees Go In The Winter?
The 10 Largest Grasshoppers In The World
Types of Beetles: The Complete List

Throughout history, locusts have been both hated and feared. These insects, related to grasshoppers, produce massive swarms that move over regions, consuming crops and causing significant agricultural damage. Locust plagues have ravaged cultures since the Pharaohs ruled ancient Egypt, and they continue to do so now in different parts of the world. One or two locusts may appear charming and harmless, but multiply the ravenous insect by a million, and Texas will face a nightmare of biblical proportions. But, has there been a recent swarm of locusts in Texas, or are we confusing it with the state’s more common insect, the cicadas? If so, when do these noisy bugs appear?

The sound of buzzing and clicking is synonymous with summer, and the strange arrival of millions of screaming, red-eyed cicadas is not easily forgotten. According to Texas Entomology, there are more than 40 types of locusts in Texas. These locusts, sometimes called cicadas (more on this later), will stay around until the weather starts to cool. In this article, you will learn more about when locusts arrive in Texas and other interesting facts.

Is There a Difference Between Cicadas and Locusts?

Though they have some resemblance and have been mistakenly used interchangeably roughly since cicadas were discovered in North America, cicadas and locusts are distinct species. A cicada is more closely related to an aphid, and a locust is a type of short-horned grasshopper.

The most notable distinction between cicadas and locusts is that, while both species emerge in enormous numbers after they hatch, cicadas do not swarm like locusts, and cicadas do not destroy and eat crops in the same way as locusts. Both locusts and cicadas are herbivores; however, cicadas are significantly less destructive when feeding. In fact, rather than feeding, cicadas cause a lot of damage to plants through their egg-laying process. Locusts are longer and thinner than cicadas and have the long back legs that all grasshoppers have. Meanwhile, cicadas have extremely short legs.

Periodical cicadas are only seen in North America while swarming locusts have not been sighted since Rocky Mountain locusts went extinct in 1902 and the High Plains locust almost went extinct after a plague in 1930.

On the contrary, these two insects are related in some ways. Cicadas and locusts both have wings, but locusts can fly far farther. These animals consume plants and lay eggs; they are quite loud and emerge in large bunches. Cicadas and locusts are not hostile toward humans, though it may appear otherwise if a huge flock of them is flying and you come in their way! It appears to be cicadas causing most of the noise in Texas – not locusts.

When Do Cicadas Appear in Texas?

Magicicada septendecim (Linnaeus), a smaller periodical cicada, completes its life cycle in 17 years and emerges in vast numbers (broods) in large geographical areas. The periodical cicada species that exist in Texas complete their lifecycles in 13 years. Some of them emerge practically every year or between two and five years. Adults appear between April and July, depending on the species and location.

The common dog-day cicadas (also known as yearly cicadas or locusts) appear in late summer and have life cycles ranging from 2 to 5 years. Female cicadas use a saw-like egg-laying structure (ovipositor) to inject clusters of eggs into twigs and tiny branches. Small nymphs hatch from the eggs after 6 to 7 weeks and fall to the ground. They crawl into the earth in search of tree roots. At night, fully mature nymphs burrow out of the ground, leaving a 1/2-inch hole behind them. Adult cicadas emerge from this final nymphal stage through a crack along the back, leaving behind the light brown cast skin. Adults have a lifespan of 5 to 6 weeks.

How Do Cicadas Make Noise?

If you guessed that cicadas make the same sounds as crickets, another noisy summer bug, you’ll get points for effort but none for accuracy. Crickets create a sound by rubbing their wings together (not their legs!), while cicadas have a sound-producing organ called a tymbal. When the cicada flexes its muscles, a sequence of ribs buckles one after the other on the tymbal. A click is produced every time a rib buckles, and a buzzing sound is produced by many clicks.

The process is similar to how a bendy straw makes a sound: pulling and pushing the bendy straw’s ribs together produces a sequence of clicks. If you could pull, push, and twist a bendy straw a hundred times per second, the clicks would become so close together that you’d just hear a buzzing sound: this is how rapidly the cicada’s tymbal can vibrate!

What Are Some Natural Ways to Get Rid of Cicadas’ Noise?

1. Spray Water Around Your Area

Cicadas love dry, sunny environments. The most efficient thing to do is water your lawn frequently to keep it moist. You should also sprinkle water on the trees around your house to keep cicadas away. Additionally, spraying water on them provides temporary relief from their noise. This may not be a permanent solution, but it will certainly get the cicadas to stop buzzing.

Another method for eliminating cicadas’ noise is pruning. Cut cicadas’ egg-filled branches short if you see them, as this will prevent cicadas from returning to the same branch in the future.

If you expect a large periodic brood of cicadas, you should not plant any new shrubs or plants in your garden. We recommend this because when a female cicada lays eggs on the branches, it creates small slits that injure the branches and may cause the plant to perish.

3. Cover Your Trees and Shrubs

Lastly, you can defend your garden by covering the plants with netting to keep big groups of cicadas from resting on trees and plants. You may also wrap foil or adhesive paper around little plants that are still growing.

The Top 10 Loudest Animals on Earth (#1 is Amazing)

Why Do Chicken Eggs Come in All Sorts of Colors? 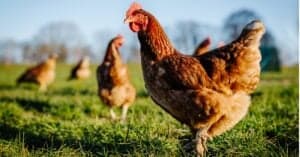