Each locust can eat its weight in plants each day. 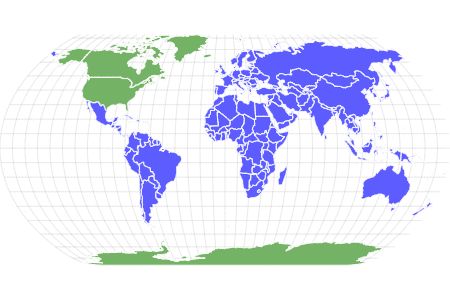 Group Behavior
Fun Fact
Each locust can eat its weight in plants each day.
Diet
Herbivore

View all of our Locust pictures in the gallery.

View all of the Locust images!

The word “locust” is given to certain types of grasshoppers with short horns.

They are known for their swarming behavior, which occurs when environmental conditions are right. Locust plagues have affected crops and farmland since biblical times, attacking any growing green vegetation in their path.

Colloquially, the word “locust” refers to different creatures depending on where in the world you are. Sometimes, locust may also refer to the cicada, a different species of bug that emerges from the ground and is known for making loud sounds from the trees.

There are 27 species found worldwide. They are:

Locusts are not a particular species. They are in fact a subset of grasshoppers that develop swarming behavior and gregarious growth when environmental conditions are right. Grasshoppers do not decimate crops and plague farmers like locust swarms do. They cannot fly as far as locusts do.

Cicadas and locusts are not similar species. Cicadas suck sap from trees and are known to come out of the ground and sing. They also leave their shed shells all over the trunks of trees. Locusts do not possess the same burying behavior, and they tend to feed in large swarms on crops and other vegetation.

Appearance: How To Identify Locusts

These insects are usually about the size of a paper clip and have green or dusty brown shells. They have long back legs used for jumping and hopping, and they can rub them together to creates sounds and sing.

There are 3 stages in the insect’s life cycle: egg, nymphs or “hoppers,” and adults. When they are in the nymph stage, the insect may experience an excess amount of serotonin, triggering their gregarious phase. This phase is triggered when the rain returns after a long dry spell. When this happens, nymphs and adults change in color, often becoming darker colors with bright markings. This is when the locusts begin to swarm together and attack crops, fields, and anywhere with fresh vegetation.

When in this phase, they also begin to mature more quickly and reproduce much more quickly. Their brains increase in size, and they develop more endurance so they can travel farther as a swarm.

Habitat: Where to Find Locusts

These insects are found on nearly every continent in the world except for Antarctica and North America. The Rocky Mountain Locust was the only species found in North America until its extinction in 1902.

Their habitats include fields, wetlands, sparse woodlands, and places frequented by crops or domestic animals. They prefer open, sunny areas with many types of grass and flowers.

Diet: What Do Locusts Eat?

These insects have been known to swarm in large plagues, consisting of billions of insects. These plagues attacked vegetation and farmland, causing starvation and costly damage to the fields they wiped out. These insects prefer to eat soft foliage, such as leaves and grasses. Different species will have different diets and different preferences in which plants they like to consume.

When food is scarce, they will sometimes forage on dead grasshoppers, or even target weaker members of their species.

While they do swarm and devastate crops, these insects play a huge role in stimulating plant growth in their habitats. Nymphs have a larger appetite than adults.

Prevention: How to Get Rid of Locusts

In ancient times, people were unable to do much to protect their crops from a swarm of these insects. They were a threat of biblical proportions and were rightly feared by the people of ancient times.

Modern solutions for these insects involved massive amounts of pesticides to protect crops. These pesticides were sprayed over the fields using small planes.

In 1997, a safer method was used to control massive swarms. A biological pesticide was created that killed the insect via fungal growth. It spread from insect to insect, ultimately killing the swarm. The most ideal control methods were ones that do not greatly affect the environment.

Though they could do little to control the locust plagues, humans have been consuming these insects for many millennia. The Torah permits the consumption of certain species, and eating these insects is considered halal. They can be fried or smoked, and are considered a delicacy in some cultures and areas of the world.

What is a locust?

A locust is a type of bug found in the same family as grasshoppers. All locusts are grasshoppers, but not all grasshoppers are locusts. Locusts are triggered by environmental conditions, causing them to release copious amounts of serotonin and swarm in overwhelming numbers.

What is the difference between a locust vs. a cicada?

Locusts swarm together in huge numbers to attack crops and vegetation. Cicadas bury in the ground and come out every few years, depending on the species. They make loud sounds and songs that often mark the season of summer. Cicadas also leave their shells behind on trees, while locusts do not shed their shells the same way.

Can a locust kill you?

Locusts will not attack humans and do not carry dangerous diseases. However, locust swarms that wipe out farmland can be detrimental to those who live off of the crops that the locusts feed on.

Locusts are dangerous to those who live off of the land that they decimate. However, locusts do not bite or sting humans. They also do not tend to carry diseases that can be transmitted to humans.

Do locusts bite or sting?

Locusts will only attack and feed on plants. They do not bite or sting human beings.

Locusts have a bad reputation because, when they begin to swarm in their gregarious phase, they demolish crops and farmland. Locust swarms can also be incredibly difficult to mitigate once they have started, so they could be a bad sign for farmers and anyone who lives and profits off of the land. When they are not in their gregarious phase, however, locusts are harmless and tend to remain by themselves.

What is the difference between a locust vs a grasshopper?

Locusts are a type of grasshopper. Grasshoppers live alone and do not plague crops and farmlands, while locusts will swarm together in huge numbers and devastate farmland.