iStock.com/Alisha Bube
Share this post on:
More Great Content:
8 Animals That Can Kill An Elephant
Elephant Lifespan: How Long Do Elephants Live?
Mammoth vs. Elephant: What's the Difference?
What's a Baby Elephant Called & 9…
What Is The World's Largest Elephant?
Elephants Charge Lounging Crocodiles in Wild Safari…

We all have sugar cravings from time to time. Whether you prefer a delicious ice cream cone or your favorite chocolate bar, nothing tastes quite as good as a sugary treat. Elephants love bananas and sugar cane, and will often destroy local farmer’s fields in order to gorge themselves on these delicacies!

A surprised visitor on a Thai road shot a video of an elephant causing traffic congestion by collecting sugar cane from oncoming vehicles. The elephant is seen walking into the road and stopping traffic so it can take sugar cane from the back of passing trucks in the footage. The truck drivers traveling down a road in Chachoengsaos began slowing down in fear of the elephant.

Auan-tia is a juvenile elephant that has lived in the local sanctuary for the majority of his life. The vehicles had no option but to slow down and allow the baby elephant to keep investigating.

He comes to a truck that isn’t sealed at the top and chooses to take the riches. The beautiful animal had caused complete traffic congestion in the process. What else can you do but sit by and watch in awe as this giant creature finds his favorite snack?

Witnesses reported the elephant tried to steal from over 12 separate vehicles in a two-hour period before returning to the bush. Nobody dared to approach him and force him back into the forest since he was a large elephant. Cars were passing him at a snail’s pace, and there were long lines waiting for him.

Gigantic Auan-tia rummaged into each truck in the caravan, which had been traveling from a nearby farm, for several minutes. He looted some food after looking through one car, then held up the next vehicle in route and did the same. Sugar cane and cassava made up his lunch that day.

After finishing his meal, the elephant trudged back into the woods. Wildlife officials, on the other hand, warned drivers to be cautious of the creatures. This area’s elephants are gentle and rarely will hurt anyone. He was merely looking for some food.

Elephants are common on the road, so truck drivers are used to them and take additional precautions, but this was an uncommon situation in which the animal halted a large number of cars and refused to go.

It’s always nice to see a wholesome interaction between humans and wild animals. It’s safe to say these truck drivers had quite the story to tell their families when they got home. Elephants are incredibly lovely animals, as seen by the almost 62 million views on this video. This is certain to bring a grin to your face as you watch it. 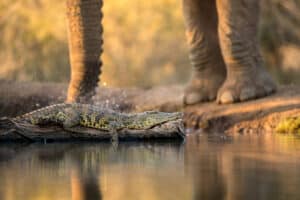