Tick vs Beetle: What are the Differences?

In this article, we will be taking a look at tick vs beetle while comparing them and analyzing key differences among other important details.

Comparing a Tick and a Beetle

The Key Differences Between a Tick and a Beetle

The most notable differences between a tick and a beetle are their morphology and size. Ticks have four pairs of legs, scutums, and a round shape with a length of 3mm or more.

Beetles, on the other hand, have front and hind wings, with the front wings covering the hind wings as the latter is used for flying. They also have different shapes ranging from round to half-round to cylindrical with the biggest beetle boasting up to 6.5 inches in length.

These animals have some other differences as we are about to see.

Ticks are very much inferior in size to beetles. They have an average length of 3mm. Beetles, however, vary in size across their species. The biggest beetle, which is the Titan beetle can grow up to 6.5 inches in length while the smallest (Scydosella musawasensis) is 0.325mm long.

On the whole, beetles are absolutely larger in size than ticks.

Ticks and beetles are non-venomous for the most part which is one of the things they have in common. However, they differ in the level of harm they cause to humans.

Ticks are non-venomous but their saliva has protein families similar to the ones in other venomous animals. Not only do they bite but they also transmit a number of diseases including Lyme disease, Rocky Mountain spotted fever, Colorado fever, and tularaemia among others.

Interestingly, ticks can also release a chemical to remove the pain that should come from their bites.

Beetles are also largely non-venomous with the exception of the onychoserus albitarsis species. They can, however, inflict pain and irritation. The most popular example is the blister beetle which is known for releasing cantharidin, a chemical that causes skin blisters.

Ticks have four pairs of legs, zero antennae, and are either brown or black. As larvae, they have three pairs of legs. They have a round shape and patterned scutum except for the deer tick which has a solid-colored scutum.

Unlike ticks, beetles have antennae with 11 segments and the antennae can stretch longer than the body depending on the species. They also have large compound eyes which are visibly well-developed in adults. Their color range includes black, brown, yellow, blue, red, and green.

Ticks and beetles are similarly present on all continents in the world. That includes Africa, Asia, Eurasia, Central-America, North-America, South-America, and Oceania. However, their habitats differ slightly.

While ticks prefer straying around the woods, woodpiles, and overgrown fields, beetles love staying underneath rocks, rotten logs, and dung heaps. Both animals, however, get into human homes through pets, lawn equipment, and clothes. Beetles particularly love to perch on food, carpets, and rugs.

As we mentioned before, ticks and beetles are largely non-venomous. Also, while ticks only feed on humans for blood which is their major diet, beetles can do without human blood.

It is important to mention that ticks only attack humans because they need blood to survive but they do it in a non-aggressive way. They even release chemicals intended to remove the impact of their bites.

In the same vein, beetles are not aggressive and they only bite if you disturb them or try to kill them. For instance, when their existence is threatened, blister beetles often release a substance known as cantharidin to deter their attackers. They often cause blisters on human skin which can be very painful and irritating but cause no real threat in the long run.

Ultimately, ticks and beetles are not at all aggressive; the former only bites for survival, and the latter only bites or releases cantharidin when threatened.

Canada’s Oldest National Park is a Must See Destination 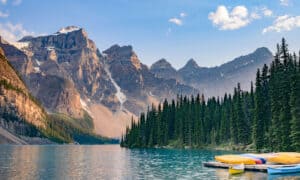