What Do Anoles Eat?

Anoles are small lizards that remind many of a “prettier” iguana. There are more than 425 species of anole, including the green anole which is commonly found throughout the Southeastern United States. As a common species of lizard, as well as a common pet for first-time reptile owners, an anoles diet is important to know and understand. Let’s take a look at these cute lizards and learn: What do anoles eat?

What do anoles eat?

As insectivores (a subset of carnivores), green anoles eat only insects. These small lizards are native to the Southeastern United States and their diet reflects their ecological niche. You can see anoles scampering across hot sidewalks or carefully sitting on branches during the warmer months of the year.

When it comes to insects, anoles eat almost anything smaller than they are. In the wild, this little lizard chases down small bugs like spiders, flies, crickets, moths, and butterflies. When it finds them, they also will eat slow-moving prey like slugs and worms. As hunters, they have an active role in their diet and regularly search for food while scampering along the ground and trees.

Typically, these lizards are found in high-humidity zones like swamps, forests, and wooded beaches. The range of anoles stretches from the United States into most of South America. In these humid areas, food is plenty, and anoles are known to eat 2-5 insects a day without much trouble.

Additionally, anoles are known to occasionally drink nectar and eat various grains and seeds. Since this isn’t a common occurrence, they are still known as insectivores. Still, the adaptation is surely useful and a great way to get extra food in tough times.

Anoles are insectivores and eat all sorts of insects. Here’s a complete list of foods that anoles eat in the wild and in captivity:

An anole in captivity needs about 3-5 crickets a day to sustain itself. The numbers are likely similar in the wild.

How do anoles hunt?

Anoles partol an area of 1m3, or 35 cubic feet. Within this area are a male and around two females. Hunting for an anole is a pretty straightforward proposition. They sit motionless until they see potential food. Their prey usually has to be moving before they notice it, however. Once they’ve noticed their prey, they will slowly stalk it until they are in range to strike. Pouncing on it, they bite down, chew on it slightly, and swallow it nearly whole.

One of the coolest things about anoles is their ability to shift colors. Most anoles can shift from bright emerald green to a dark shade of brown, almost black. Although they are sometimes called “American chameleons”, they aren’t actually a part of the family. Additionally, they don’t have control over their color changing and it isn’t used as a hunting strategy. Rather, it’s a reflection of their stress levels and the environment they are in.

What other species compete with anoles for food?

There are two anole species that live in the United States: the brown anole and the green anole. Green anoles are native to the Southeastern United States, but their cousins, the brown anole, were introduced to the US later from the Caribbean islands. As the brown anole spread through the south, they eventually started displacing green anoles. They often compete for territory as well as food. Although the two lizards are roughly the same size, brown anoles seem to be more aggressive and less likely to back down from fights. These two simply don’t get along together and brown anoles are the bully between them.

When the two species clash, they typically separate into two distinct areas. Green anoles tend to flee to the trees as they are naturally more arboreal in nature. This allows them to live without much threat from the brown anole and continue hunting. Brown anoles are more terrestrial and tend to stick close to the ground. In regions where both are present, they stick to their areas more closely.

South of the United States there are hundreds of species of anoles that are common across Caribbean islands, Central America, and much of South America. Several species of anoles are only found on small islands. For example, the leopard anole only lives on Guadeloupe Island, which is the same size as the city of Houston, Texas.

Anoles are common pets in the United States as they are small and easily kept. Although green anoles are known to be easily stressed, proper care can help mitigate this. Many first-time reptile owners purchase anoles because of their low maintenance and easy care.

The only real restriction when it comes to keeping anoles as pets is their inability to be handled. As high-stress animals, they prefer to be left alone, showing clear stress when handled. Often, they turn brown and can sometimes drop their tails. If you want a cute liard with little upkeep but don’t want to handle it, a green anole is likely a good fit for you. Aside from green anoles, many people keep brown anoles, Jamaican anoles, as well as a few other species.

How do you feed a pet anole?

Anoles search for their own food in the wild but need to be fed daily when in captivity. Typically, anole owners buy their food from a pet store to keep things safe. Bugs caught from outside may be toxic or infected with pesticides used on grass and flowers.

The most common foods that owners feed anoles are small crickets, mealworms, and flightless fruit flies. Additionally, fruit puree can be given as a treat, but not too often. When picking out insects for your anole, make sure that the insect is small enough to fit between your anole’s eye as a good rule of thumb. This will ensure nothing gets stuck or harms your lizard. 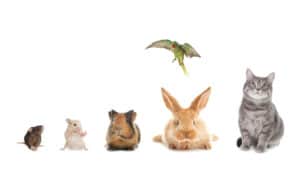 Best Insurance for Your Exotic Pet

Best Insurance for Your Exotic Pet