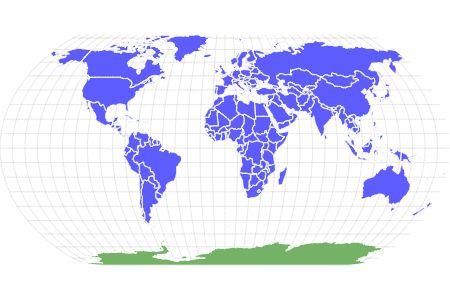 View all of our Heron pictures in the gallery.

View all of the Heron images!

Feeding gracefully at the edge of the water with its sharp, pointed beak, the heron is a family of long-legged birds that can be found in many different climates all over the planet.

It is exceptionally well-adapted for the environment in which it lives. This also means the heron is highly sensitive to any disruptions in its native habitat.

Where to Find the Heron

These birds are endemic to freshwater wetlands, lakes, and ponds all over the world. Although most common in the tropics, it is found in almost every single region except for the driest deserts, the tallest mountains, and the frigid Arctic and Antarctic.

These birds construct a large platform of sticks in bushes, cliffs, or trees. These nests are part of larger colonies called heronries or rookeries.

The scientific name of the heron family is Ardeidae. This is derived from the Latin word for the heron, ardea. There are more than 60 species in this family, but some of these species are egrets and bitterns instead of true herons.

The biological differences between the heron and egret are fairly minimal, besides the fact that egrets have a whiter appearance, especially in the breeding season. They can even occur in the same genus together.

These birds are a highly diverse family with all kinds of unique color schemes and appearances, including black, grey, blue, yellow, and much more. The most common and prominent characteristic is its very long neck, crooked in the middle to resemble an S shape, which helps to support the heavy bill and head. When the heron takes flight, its head curves back against the body, and the feet dangle down. Few other birds fly in this manner.

Other prominent characteristics of the bird include the large wings, the big, sharp bill, and the exceptionally long legs to wade in the water. Part of the body is covered in a fine powder, created as a result of disintegrating feathers, which enables the bird to clean itself. This is a large bird, usually measuring between 1 and 5 feet tall. The largest species, the goliath heron, eclipses all others in size. It stands up to 5 feet tall and has a wingspan of 7 feet and 7 inches.

These are highly nomadic birds, moving from place to place as circumstances dictate. The distance over which it will travel depends on the climate of its normal breeding grounds. Southern populations reside in a similar place all year round, while the northernmost populations tend to move south for the winter where the water will not freeze over and prevent them from feeding. The great blue heron, for instance, will travel between Southern Canada and the Southern United States or even Central America.

Given its wide distribution across the world, these birds have a very eclectic diet. There are generally two types of feeding strategies: the generalist, which feeds on whatever happens to be available, or the specialist, which feeds on a very specific set of prey. Either way, it plays a vital role in controlling prey populations.

What does the heron eat?

These birds prey upon fish, reptiles, amphibians, crustaceans, mollusks, and aquatic insects near the shore. After wading into the shallow parts of the water, the bird identifies animal prey with its sharp sight and then strikes out quickly with its beak.

If you’re ready to dive into the complete diet of herons, make sure to check out our guide ‘What Do Herons Eat? 25+ of their Favorite Foods?‘

Given their massive range, most species are currently classified as least concern by the IUCN Red List and require no special conservation efforts. But a few, in particular, are endangered or critically endangered, including the white-bellied heron of the Himalayas and the Madagascar pond heron. Island-specific night heron from Mauritius, Bermuda, and elsewhere have already been driven to extinction shortly after they were discovered. More often than not, the bird is threatened by the loss and degradation of wetland habitat.

What eats the heron?

Due to its size, an adult bird has few consistent predators. However, several animals do prey upon eggs, juveniles, and smaller herons, including raccoons, hawks, eagles, ravens, crows, bears, vultures, and much more.

Reproductive strategies tend to vary by species, but generally, in the breeding season, the male attracts a single mate with an impressive courtship display in which he ruffles his plumage and flies around. Once the female has chosen an appropriate mate, the pair produces up to seven eggs at a time.

After an incubation period lasting for several weeks, the chicks emerge from the eggs with undeveloped bodies. Both parents put a significant amount of time into the care of their young to ensure they grow properly. They share incubation, nest construction, and feeding duties. The largest chicks tend to receive the most food from the parents since they are the most likely to survive.

It usually takes anywhere between two and three months before the chicks grow their full flight feathers and become more independent. Many of these chicks won’t survive their first year of life, but those that do usually live up to 15 or 20 years in the wild.

These are some of the most common water birds around the world. It is estimated that the great blue heron of North America has up to 5 million mature individuals remaining in the wild, while the grey heron of Eurasia and Africa contains up to 2.5 million mature individuals, but particularly where habitat is threatened, some of the rarer species are on the precipice of extinction.

Are Herons herbivores, carnivores, or omnivores?

Herons are Carnivores, meaning they eat other animals.

What Kingdom do Herons belong to?

Herons belong to the Kingdom Animalia.

What phylum do Herons belong to?

Herons belong to the phylum Chordata.

What class do Herons belong to?

Herons belong to the class Aves.

What family do Herons belong to?

Herons belong to the family Ardeidae.

What order do Herons belong to?

Herons belong to the order Ciconiiformes.

What type of covering do Herons have?

Herons are covered in feathers.

In what type of habitat do Herons live?

What is the main prey for Herons?

What are some predators of Herons?

Predators of Herons include foxes, minks, and raccoons.

What are some distinguishing features of Herons?

How many eggs do Herons lay?

What is an interesting fact about Herons?

Herons inhabit wetlands around the world!

What is the scientific name for the Heron?

The scientific name for the Heron is Ardeidae.

What is the lifespan of a Heron?

What is the Heron's wingspan?

What is a heron?

The heron is a family of birds with long legs and beaks that reside near wetlands and water habitats. It is a member of the order of large water birds known as the Pelecaniformes, which includes the pelicans, ibises, and spoonbills.

A full-sized adult heron has few enemies in the wild, but younger or smaller heron are preyed upon by all kinds of carnivorous mammals and birds.

What do herons eat?

What's the difference in a heron vs. an egret?

The egret is a member of the heron family. Most of them belong to the genera of Egretta and Ardea. Although there are few significant biological differences between the egret and a true heron species, the egret does tend to have white or buff plumage.

What is the difference between a heron vs. a crane?

Due to the similarities in appearance and habitat, the herons and cranes are often confused with each other, but cranes actually belong to an entirely separate order, Gruiformes, which is not closely related to the heron at all. The main differences are that the crane has a shorter, straighter neck and a smaller beak. Cranes also tend to flock together in wide-open spaces with little tree cover.

Does the heron migrate?

Yes, but even within species, only the northernmost populations tend to migrate long distances.

How many eggs does the heron lay?

Depending on the species, the heron can lay up to seven eggs per clutch.

How fast does the heron fly?

The heron can usually fly up to 30 miles per hour.

What is the heron’s wingspan?

Wingspan varies by species. The largest species, the goliath heron, has a wingspan of nearly 8 feet, but most species only have a wingspan of a few feet.

When do herons leave the nest?

Most heron chicks leave the nest within three months of hatching.

How do Herons have babies?