Goldfish are small carp that are prized for their beauty. These fish were selectively bred in China over 2,000 years ago for food, but they have since become beloved, albeit short-lived, pets throughout the world. Although goldfish are known for being small, they can grow quite large in the right conditions, upwards of five pounds. What are goldfish eating to get that big in the wild and in captivity?

We’ll take a look at all the foods that goldfish enjoy and what you have to do to keep one healthy.

What Foods Do Goldfish Eat?

Goldish eat insects, plants, and crustaceans. These omnivores are opportunistic feeders that have a bit of trouble with self-control; they’ll continually eat even if it is to their detriment.

Among the foods that they will gorge on are:

These are just some of the more common foods that goldfish eat throughout their lives in the wild. Most of the time, goldfish will choose to eat insects, insect larvae, plants, and the eggs of insects or other fish. They have relatively small mouths that make it hard to consume a great deal of food, and their offensive capabilities as hunters are limited to taking small creatures by surprise. 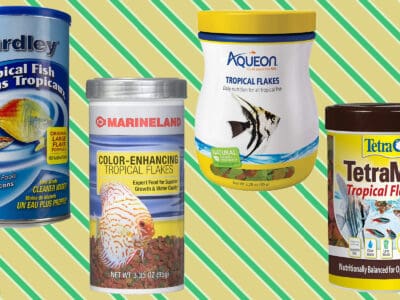 Nevertheless, goldfish are highly successful feeders that spend hours of every day foraging for their preferred foods.

What Do Goldfish Eat as Pets?

Although they were first selectively bred in China over 2,000 years ago for food, goldfish are more commonly seen swimming in an aquarium in a house these days. They are very common pets, valued for their beauty and ability to flourish in conditions that are less than favorable for other fish.

Typically, they are either kept in aquariums or domestic ponds, though they also appear in natural waterways when people get rid of the fish for getting too big. When they’re kept in captivity, their diet is different than when they are living in the wild.

Here is a list of foods that pet goldfish eat:

Goldfish can consume each of these foods, though most people are content feeding them commercial food pellets if they’re in an aquarium. The goldfish kept in ponds and allowed to grow a bit more will often receive chopped-up vegetables, algae wafers, and insects.

In many cases, goldfish kept in ponds will still feed on insects that come close to their waters, like mosquitos. This is fortunate because it prevents insects from using the pond as a breeding ground.

It is important to pay attention to a goldfish’s diet and to feed them enough that their nutritional needs are met.

How Much Does a Goldfish Eat?

The question of how much a goldfish eats needs to be properly qualified. To start with, a goldfish in captivity has specific dietary needs that must be met. If a goldfish is deriving its nutrition from food pellets, as many goldfish do, it is best to feed them 2-3 times per day and only as much as the food label recommends.

It is important to remember that some goldfish do not know when to stop eating. These fish have been known for a practically nonstop eating habit, so goldfish owners need to provide an adequate amount of food without providing too much. Otherwise, waste byproducts of feeding goldfish, namely ammonia, can build up in their tanks and become a danger to them.

Thus, when they are kept as pets, goldfish need to eat about 2 or 3 times per day with varied foods, like algae wafers, food pellets, and chopped vegetables. The amount is often described as the amount that the goldfish can eat within a minute or two because you don’t want the food sinking to the bottom of the tank and causing water quality problems.

In the wild, goldfish eat quite often as they are constantly foraging, but they have fewer worries in terms of water quality and limited growing space.

What You Should Not Feed Your Goldfish

Whether you are trying to keep your goldfish healthy or you find wild goldfish, they need to avoid some foods. We’re going to show you some of the foods that are either not the best options or should never be put in a goldfish’s aquarium.

Bread, crackers, and cereal can cause bloating in your goldfish that can eventually kill them. Generic fish food tends to lack the nutrients these fish need and clouds the water more than foods specifically made for goldfish.

Although goldfish are omnivores, they need to avoid foods like beef and pork because they are high in fat, and that can negatively affect the water and cause liver damage in the fish.

Goldfish can grow quite large in the wild, and their bright colors do them no favors when it comes to hiding from predators. In other words, they can be a tempting target for a predator seeking a good meal. Some of the most significant goldfish predators include:

These animals will find goldfish in the wild and pluck them out of the water. The danger to them doesn’t end when people place them in an artificial pond, either. If a hawk can spot a goldfish from above, they’ll attack.

Humans are predators of goldfish in the sense that they keep them for pets, often in less-than-optimal conditions, but goldfish are rarely eaten by people.

Goldfish are interesting omnivores that have trouble knowing when it’s time to stop eating. They consume insects, insect larvae, and eggs in great numbers, often helping human beings by cutting down on the number of harmful bugs, like mosquitos.

These beautiful fish are common sights in aquariums and yards around the world, and they can be healthy as long as their owners know what and how to feed them.