What Do Sponges Eat?

Sponges, often known as “sea sponges,” are aquatic dwelling organisms that many people wouldn’t even recognize as an animal. Still, these fascinating organisms are the ancient “sister” ancestors of all animals and play an important role in evolutionary history. Although sponges don’t appear to do much, they are actually quite active in their role as filter feeders. Let’s look at that deceivingly active role and learn a bit about what sponges eat.

What do sponges eat?

While most people may be familiar with the terms “omnivore” and “carnivore,” neither quite apply to the sponge. Sponges are filter feeders and passively allow water to flow through them, capturing any food that goes through. Since much of this food is bacteria and plankton, it’s single cellular in origin. Animals who filter microscopic life and debris as food are known as detrivores, as it’s more specific to their unique niche.

Aside from plankton, sponges eat bacteria, viruses, archaea, protists, and fungi. Although (most) single-celled organisms are impossible to see, sea sponges are able to digest them as they float through. It doesn’t look like much is happening, but a single teaspoon of seawater can be home to as many as 100 million viruses.

A second type of carnivorous sponge acts as a parasite to shells and coral structures. These parasitic sponges attach to their host and bore holes through them, draining them of nutrients. Eventually, the cavities and tubes collapse, killing the animal. These types of sponges are very dangerous for oyster and mussel farms for obvious reasons.

Sponges are an incredibly diverse animal group, and as a result, their diets are varied. When it comes to freshwater sponges, many of them host “endosymbionts,” meaning they host other organisms within themselves for a specialized purpose. Within freshwater, many sponges host photosynthesizing algae within their own body structure, receiving nutrient benefits as the algae work.

In ecosystems where filter-feeding isn’t as viable, this relationship allows sponges to get 50-80% of their energy needs passively. Living in these specialized niches, they often develop “leafy” structures in order to better serve the photosynthesizing needs of algae.

Here is a complete list of foods that sponges will typically eat:

Although this is a complete list of foods for sponges, an accurate diet will depend on the species of sponge in question.

How do sponges hunt for their food?

There are three main ways that sponges get their food, although you might only consider one to be proper “hunting”:

By and away, the most common way sponges eat is through passive filter feeding. Sponges are elementary animals, and their biological structure reflects that. They don’t have distinct respiratory, digestive, or waste systems. Instead, they transfer food directly from the water into the cells via vesicles. The incoming food passes through two filters as a sponge sits in nutrient-rich water. The first is the archaeocytes, amoeba-like cells that are designed for food that is 0.5 μm (micrometers) to 50 μm (micrometers). For reference, spider web silk is between 2-3 μm. The second filter is for anything below .5 μm, and choanocytes eat these food particles.

Carnivorous digestion is much less common, but a few species of sponge “hunt” their food, albeit in a very passive way. One species of sponge, for example, has been found in Mediterranean caves where the water is very still and poor for filter-feeding organisms. As a result, these sponges capture their food using fine threads that entangle their prey. After their small prey (no larger than 1mm) is stuck, the sponge wraps it in further threads, and digestion begins. Another species of carnivorous sponges use modified inflation systems to “balloon” their body structure and capture prey. 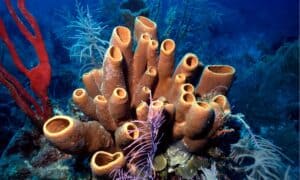