What Was the Largest Herbivore Dinosaur?

Written by Nilani Thiyagarajah
Published: September 7, 2022
Share this post on:
More Great Content:
7 of the Largest Prehistoric Animals Ever…
Discover the 8 Smartest Dinosaurs Ever to…
Meet Every Dinosaur Featured in Jurassic World…
Top 10 World’s Largest Dinosaurs Ever
9 Dinosaurs With Long Necks
Meet the Largest Carnivorous Dinosaur in History…

When people talk about dinosaurs, they’re likely to throw out common names, such as Tyrannosaurus Rex and Stegosaurus. However, if we’re talking about the largest dinosaurs to ever exist, the contenders for this title are probably much less commonly known.

It can be hard to determine which dinosaur was the largest. After all, humans and dinosaurs were never on the planet at the same time. All we have to go on is fossil evidence. Much of what scientists have been able to put together based on fossils has been based at least somewhat on conjecture.

However, scientists have been able to make pretty good guesses at how big different dinosaurs were. Read on to learn about the largest herbivore dinosaur!

What and How Did Herbivore Dinosaurs Eat?

While carnivores only eat meat, herbivores exclusively (or at least primarily) eat plants. Many dinosaurs that ate plants had beaks. They also had teeth in their cheeks that were ideal for cutting up and grinding vegetation.

These teeth would have made it possible for them to eat a wider variety of plants than they would have been able to eat otherwise. These included plants that weren’t particularly soft, such as horsetails and cycads.

Herbivore dinosaurs were likely also better able to digest their food than the carnivores, due to their longer intestines. These intestines allowed them to better take advantage of the nutrition available in plants.

These herbivore dinosaurs would have eaten whatever plants were available to them in their environment. This may have included stems, fruit, flowers, and leaves. Scientists believe that they consumed enormous volumes of food, which is why many of them became so large.

When considering the largest herbivore dinosaur that ever existed, we have to look at the evidence available. All we have to go on are fossil records. However, scientists have gotten a fairly good amount of information about many dinosaur species based on these.

So, which dinosaur was the largest herbivore dinosaur? Really, this depends on the parameter you’re using to define size.

As far as we know, the longest dinosaur was the Supersaurus (Greek for “super lizard”). This animal lived in North America during the late Jurassic period (about 150 million years ago). This dinosaur was at least 128 feet (39 meters) and possibly 137 feet (42 meters) long from its snout to its tail. This is equivalent to about half of a football field!

This dinosaur is known for its extremely long neck and tail, along with a comparatively small head and brain. Scientists believe that its closest relative is the Apatosaurus.

However, even though the Supersaurus was one of the longest terrestrial animals to have ever lived on Earth, this doesn’t translate to being the largest in every way. Supersaurus is thought to only have weighed about 40 tons (88,185 pounds) at the most. While this may seem like a gargantuan size, it’s actually fairly small compared to some of the larger dinosaurs.

By mass, the largest herbivore dinosaur was the Argentinosaurus. Although it’s possible that there were bigger dinosaurs, the Argentinosaurus is the biggest one scientists have found, with enough evidence to back up its enormous size.

Paleontologists found remains of this humongous titanosaur in Argentina, giving rise to its name. The Argentinosaurus lived during the Late Cretaceous period.

The Argentinosaurus measured approximately 120 feet from its head to its tail. Scientists believe that it may have weighed 73 tons (146,000 pounds) and possibly close to 100 tons (200,000 pounds). Just a single vertebra of this dinosaur is more than four feet thick.

This dinosaur is currently thought to be not only the largest herbivore dinosaur but the largest dinosaur. As far as we know, the Argentinosaurus was the largest animal that ever lived on land.

Curiously, scientists believe that the eggs of the Argentinosaurus were only about 1 liter in volume, and the baby Argentinosaurus right out of the egg was only about 3.3 feet (1 meter) long. This means that from hatching to adulthood, this dinosaur would increase in size by five orders of magnitude, more than any other amniote animal has been known to.

Scientists also believe that the Argentinosaurus reached its functional limit in terms of size. That is, it got as big as it could have gotten without size starting to compromise crucial functions that supported the survival of the animal.

How Did Herbivore Dinosaurs Become So Large?

Dinosaurs were alive during the Triassic, Jurassic, and Cretaceous periods. At these times, the climate was significantly warmer than it is now. Carbon dioxide levels were more than four times higher than they are now, which gave rise to a lot of plant life.

Scientists believe that herbivore dinosaurs became so large because there was so much food to support their growth. Additionally, being large helped to protect them against carnivores, such as Tyrannosaurus Rex.

Additionally, the three dinosaurs we mentioned that could potentially be the largest herbivore dinosaurs have something in common – they were all sauropods. Sauropods were the largest of the large dinosaurs. They had hollow bones, very long necks, likely enormous stomachs, and did not chew their food. The well-known Apatosaurus and Diplodocus were sauropods as well.

Sauropods appeared late in the Triassic period and started to diversify in the middle of the Jurassic, being present through the Cretaceous period as well. Scientists believe that lightweight bones of these dinosaurs and the evolution of more efficient air-sac breathing allowed for rapid growth of previously small dinosaurs.

Essentially, there were several evolutionary phenomena, including also the ability to swallow large amounts of plant matter, that took place that drove the increase in size of these dinosaurs. Being able to keep large amounts of food inside the digestive tract for long periods of time would enable them to extract the maximum amount of energy from this food. 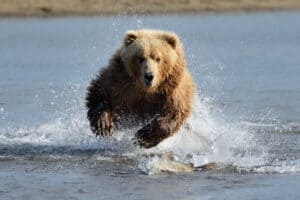