Discover The 7 Largest Animals In Rhode Island, and Where You’ll Find Them

Rhode Island may be the smallest state in the United States, but that doesn’t mean it isn’t home to some amazing wildlife. You won’t find incredibly large creatures like alligators here. Yet, you can still find some sizable creatures within this state’s borders. Today, we will examine seven of the largest animals in Rhode Island. You’ll learn what animals are living here and how big they can get!

What Are The 7 Largest Animals in Rhode Island?

Let’s set some boundaries on the largest animals in Rhode Island before we delve into the list. For one thing, we’re only going to consider creatures that live in the state, not those found miles off its coasts. For another thing, we’re going to examine many different types of animals.

That’s why our list is going to include things such as spiders, fish, and mammals that live in the state and not just a general size comparison free-for-all. Now that we have some parameters let’s get to the list!

The northern pike is the largest freshwater fish in Rhode Island. They average 22 inches in length and weigh a few pounds. However, the largest ones caught in the state have measured over 40 inches and weighed 35 pounds.

These fish are not native to the state, but they were introduced to the area starting in the 1960s. The northern pike is found in many lakes, reservoirs, and streams now, but they are still growing.

Although this is the largest fish in the state, many large sharks can be found just off the coast. In fact, tiger sharks weighing several hundred pounds have been caught in the waters off Block Island in the past.

The mute swan is a large, beautiful bird that is found in many parts of Rhode Island. This bird measures up to 5 feet long in body length and has a wingspan that can reach over 7 feet long.

Mute swans can be found in and around lakes, ponds, and marshes in Rhode Island, often in the coastal areas. They have a pronounced S-shaped neck, white feathers, orange bills, and a black face and nostrils.

Although it’s tempting to get close to them for a picture opportunity, these birds are known for being fairly aggressive when they are near their nests. Not only do they scare off humans, but they also chase away other birds.

The American black bear is very rare in Rhode Island, but it’s believed that a dozen or so bears have made this state their home. Most times when they are seen, it is wandering black bears looking for food rather than a stable population.

Nevertheless, they are being seen with increased frequency, so we’re considering them among the largest animals in Rhode Island and certainly the biggest mammal. They can reach 6 feet in length and stand 3 feet high on all fours. They can weigh over 500 pounds and stand on their hind legs to tower over people.

Stay away from black bears and report all sightings you may witness. They can easily kill a human.

The name “black rat snake” is given to a few different species, but we’re focusing on the eastern variant, Pantherophis alleghaniensis. This snake can measure between 6 and 7 feet, and sometimes a little closer to 8 feet.

Black rat snakes are found in forests, suburban areas, and fields, where they hunt small mammals and various other sources of food. They are fairly common, but they are not venomous. Still, it’s not wise to handle snakes that you don’t know well.

The spotted salamander is not commonly seen in Rhode Island, but not because they’re rare. Instead, they spend much of their time hiding in burrows or under debris in the wetlands they call homes.

These salamanders prefer to live near stagnant water like ponds and swamps. The spotted salamander often has dark-colored bodies in gray, brown, or close to black. Typically, they’ll have patterns of light colors like yellow or white as splotches.

The giant swallowtail is the largest insect by size alone in Rhode Island. It has a wingspan that measures between 4 and 6 inches. It is very easy to spot by size alone and lives in a variety of areas where it can be seen.

For example, these butterflies usually live in the coastal areas of the state in fields, swamps, and even suburban areas. This species nearly disappeared from the state for a while, but they have made a comeback in recent decades.

The huntsman spider is a nonnative species in Rhode Island, and it’s known as the giant crab spider or cane spider. This spider has a very large legspan that measures very close to five inches. Although they are very large spiders, their bite is not that serious.

They often live in areas with plenty of trees or under debris on the ground. Make sure you watch where you put your hands when hiking!

Now that we have covered seven of the largest animals in Rhode Island and looked at where they like to live, let’s end with a word of caution. Some of the wildlife in Rhode Island are approachable, like insects. Other members of this list should be avoided, like bears and snakes that you’re not too familiar with.

Stay aware of your surroundings when you’re in the untamed parts of Rhode Island, and avoid trouble by not disturbing wild animals.

Discover All Types Of Birds In Wisconsin 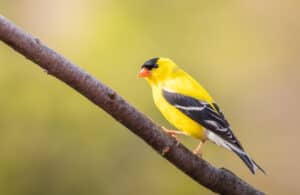