I love hugging my friend’s big fluffy Bernese Mountain Dog, but a snake? I’m not so sure. I know there are a few snakes that I would not want to hug, like a massive Boa Constrictor (do you see the word constrictor right there in their name!). But Boa Constrictors are actually one of the most popular pet snakes, so maybe they are friendlier than you think. Some big-eyed smiley snakes do score points for cuteness, and others are not venomous. One plays dead when it gets frightened! Let’s find out about the 10 friendliest snakes in the world!

On the cuteness scale, these get a 10! Rough green snakes are small bright green snakes that look like they are always smiling! Their big black eyes give them a cartoonish look. They are a slender snake (about the width of your finger) and average 10-20 inches. They are shy, timid, snakes that are so not aggressive, but they also seem to not enjoy being handled. As a pet, they are recommended for experienced snake owners or as a snake to watch, vs handle. Smooth green snakes are a very similar cousin.

Not big enough to hug, but as one of the smallest snakes on the list, it scores big points for cuteness. Ringneck snakes are tiny and only get to be about a foot to a foot-and-a-half. They can curl up in your hand they are so small. Native to the United States you could find one in the wild but they are nocturnal and only come out at night. They get their name from the orange ring around their neck that looks like a cute collar. Their bodies are typically all grayish-black on top with a yellowish-orange belly. They do lose some points on the friendliness scale because they are mildly venomous but the venom does not seem to be harmful to humans.

Bulldogs have a turned-up nose and so do these friendly snakes. The hognose snake uses its nose as a shovel, to dig through the dirt. Hognose snakes are a heavier-bodied snake that only gets to be 25-30 inches. They are blackish with dark brown markings. They produce a small amount of venom used to subdue their prey, but it’s not dangerous to people. Additionally, if they feel threatened they will initially act like a cobra and hiss and lunge but not bite. If that doesn’t work they play dead, and in a super dramatic way, they roll on their backs, writhe around a bit and then freeze with their mouth open and tongue hanging out. Now that is Oscar material!

These are one of the most common snakes in North America. Garter snakes are a super friendly snake and recommended as a great pet because they are easy to handle. Although wild garter snakes may release a foul smell if handled, captive-bred ones are easier to handle and can be tamed if handled regularly. They have vertical stripes that go the length of their bodies and are a variety of colorations. Garter snakes are small to medium-size snakes that can get to be 2-3 feet long. PetMD says they make a great starter snake for families with children.

The California kingsnake is one of the friendliest snakes because it is mild-mannered and good with kids! It is one of the top 5 recommended pet snakes for first-time snake owners. They have a calm temperament and are easily tamed with frequent handling. California kingsnakes can get to be 3-5 feet long but can live just fine in a 20-gallon tank. They are blackish-brown with off-white bands and big black eyes.

Did you know your next door neighbor could have a boa constrictor? Since it is a non-venomous snake, most states allow people to own them as pets. Boa’s and pythons are actually a popular pet for snake owners. Getting a captive-bred boa insures that the boa will be more friendly and easily socialized. Boa constrictors are a thick snake and can get to be 6-9 feet long (and sometimes even longer). If you do own a boa be sure to keep them in a secure enclosure, really secure. Every year there seems to be reports of “Boa Escapes, On the Loose in enter your town here”.

In Vancouver, Canada an 8-foot boa named Cody got loose in August of 2021. The owner woke up to find it had escaped and was not anywhere in the house. She let the police know and they put out a notice for people to be on the lookout. Luckily, Cody made his way back home without incident. Even if they are friendly, I would not want to run into one while out walking my dog!

Another friendly boa constrictor is the rosy boa. If a 6 to 9 foot snake sounds intimidating, then maybe a Rosy Boa is a better option. Rosy Boas are much smaller and only get to be 3 feet long. They have a unique coloration with some variation but many are light-colored, almost white with three skinny stripes that go down their body lengthwise. The stripes are a rose or salmon color. Rosy Boas are docile and easy to handle. They do live in the United States in the southwestern states of California and Arizona. If you want one as a pet is best to get one that is captive-bred to ensure the ease of socialization.

Another constrictor snake is pythons. A friendly little python is the pygmy python, the smallest python in the world. They are a docile snake that is from northwest Australia. When they hatch they are only 6 inches long and thin, small enough to fit in your hand. As adults, they typically don’t get longer than 2 feet. Most are brick red with faint criss-cross markings. Large pythons can eat rats, pigs, monkeys and can even consume an entire deer. What can a small Pygmy Python constrict? In Australia, they will wait outside the entrance to caves and snatch bats as they fly in and out. Clever hunting technique!

They do have a curious, friendly nature, but need gentle handling and patience. Socialization of a pygmy python can take from mere weeks up to a year. They also have voracious appetites and can put on too much weight if overfed. Finding a breeder for them can be difficult as Australia has been closed to exporting animals for a long time.

The ball python is the most popular pet snake. They are a larger constrictor snake that is tan with dark brown markings. Adult ball pythons can get to be 5 feet long. They are not venomous but are constrictors. Ball pythons are legal as pets in most states, but there is a list of other python species that are not legal, including the Burmese Python. Burmese pythons are considered an invasive destructive species in the Everglades of Florida. Too many release pets have now started their own population and are killing off many of the raccoons, opossums, and bobcats. Even though pythons can be friendly with humans, they can be destructive to a new environment, so never release one into the wild.

The friendliest snake in the world is the corn snake. They would be voted “best personality” in the yearbook of snakes. Corn snakes are very friendly and love to be handled. Because they are easy to take care of they are one of the most popular pet snakes. With a mix of reddish and orangish markings on a light background, they have scales that look beaded making it look like maize or corn kernels (thus the name corn snake). These snakes can get to be 4-6 feet long as adults. When it comes to the cute factor, search “corn snakes in hats” to entertain yourself with photo after photo of cute snakes in top hats, cowboy hats, sombreros, and more!

A snake breeder in Georgia accidentally bred a Python that has a design on its back that looks like three smiley emojis. Justin Kobylka has been breeding snakes for years and didn’t quite expect this extremely rare outcome. The snake is a lavender albino piebald ball python and it turned out to be all white with yellow markings on its back and head. Three of the markings look just like smiley faces. Now that is one of the friendliest snakes in the world!

Summary of the 10 Friendliest Snakes in the World

Here’s a recap of what we consider to be the 10 most charming snakes:

Do Wolf Spiders Bite or Are They Harmless? 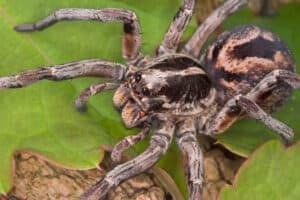