Click through all of our Bulldog images in the gallery. 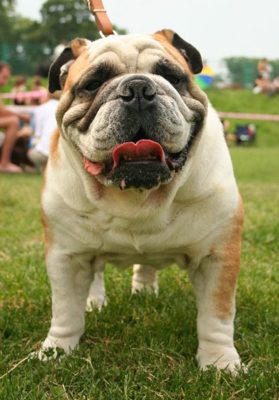 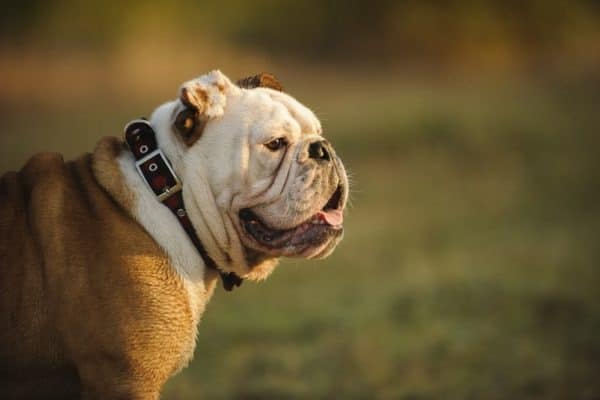 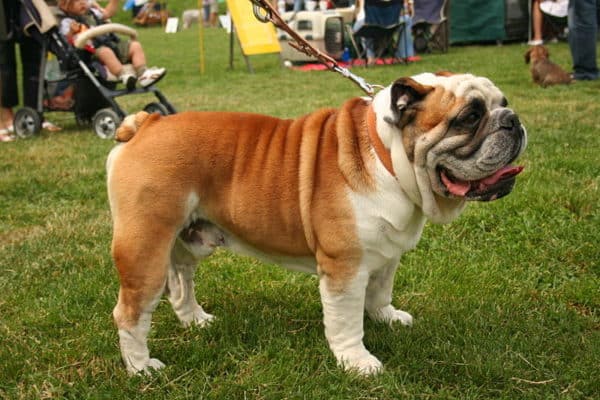 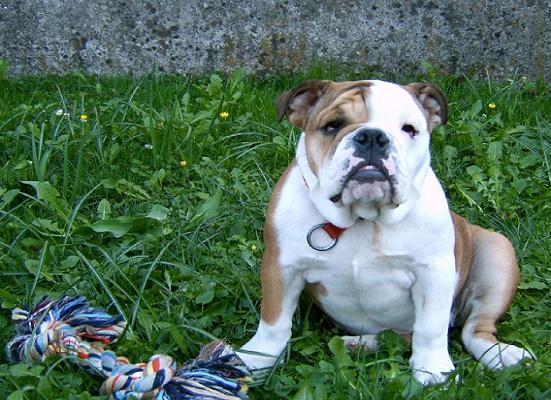 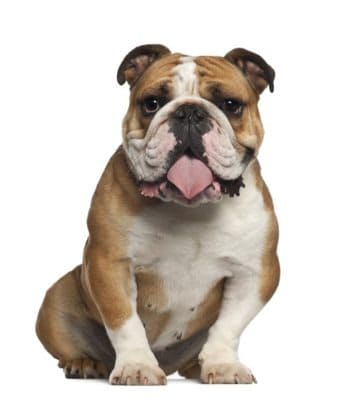 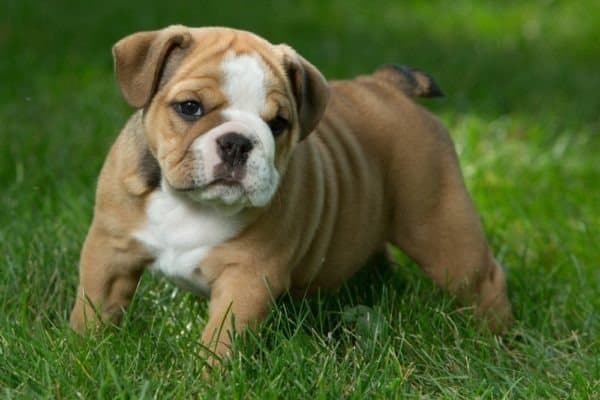 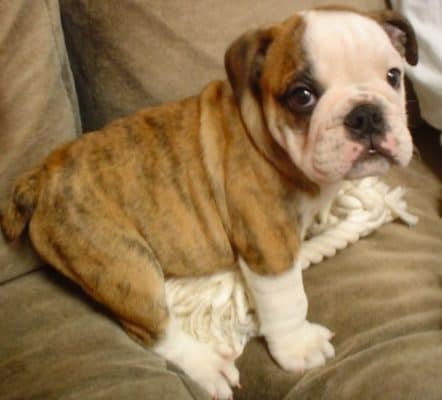 View all of the Bulldog images!

This post may contain affiliate links to our partners. Purchasing through these helps us further the A-Z Animals mission to help us educate about the world’s species so we can all better care for them

They are known to be kind as well as courageous in nature. These dogs are also extremely friendly. It has also been said that this dog’s ‘sour mug’ face has now become the universal symbol of courage. Bulldogs are known to be loyal companions and are very docile. There are three types of bulldogs – the English Bulldog, the American Bulldog, and the French Bulldog.
The ‘British Bulldog spirit’ became a phrase of courage especially after Winston Churchill became the Prime Minister. He was known to absolutely love these dogs.

3 Pros and Cons of Owning a Bulldog

Owning any pet could mean that you will have to be ready for a lot of stuff to deal with. Every animal comes with its own set of pros and cons.

Bulldogs are medium-sized, hefty dogs that have a muscular body. The height of both the female and the male dogs is 12-14 inches. Meanwhile, a female weighs about 39-50 lbs. while a male bulldog weighs about 50-55 lbs.

These dogs are quite famous for their underbites that have made their face quite famous. An underbite is related to a situation of the teeth when improper teeth alignment.

It usually causes the lower jaw to protrude further out than the upper one, causing a peculiar facial expression that is commonly seen in the English and French bulldog. This situation often causes the teeth in the lower row to be visible even when the dog’s mouth is shut.

An underbite can be an issue that is much more than just cosmetic. It can also cause chewing problems and can often cause food to fall from the dog’s mouth.

Like any other animal, these dogs are also susceptible to several diseases including several heart conditions, respiratory diseases, and hip dysplasia. The onset of hip dysplasia often comes from the abnormal development of the hip sockets in these dogs.

A condition that often impacts them is colloquially called “cherry eye.” It gets this name from the protrusion of the third eyelid, and it can cause vision issues with too much progression.

Other than that, bulldogs are also prone to heat-related problems. Their skin folds can also easily develop infections, so cleanliness is a must. Plus, there is always a threat for the bulldog to drown in any kind of water including that of a swimming pool.

Therefore, some of the common health risks that these dogs are prone to include:

The Bulldog is known to be very sweet and friendly. It is gentle and is known to be a great family dog. These dogs are especially great with the children in the family and are extremely people oriented. They often attract a lot of human attention and are predictable as well as dependable.

Courage is a very prominent trait of their personality. These dogs are also known to be excellent watchdogs. Usually kind, these dogs can still become territorial and aggressive when they meet a new dog.

How to Take Care of a Bulldog

To own a pet needs for you to know a lot of information on what to do and what to not do about them. You need to know how to take care of your pet – in this case – a bulldog.

The major ingredient in the diets of these dogs includes fish, lamb, and chicken. Extra attention should be paid to the fact that the dog should not be fed soy as some of them are allergic to it.

Sources suggest that there should be no fillers in their food and their meals should be full of healthy fats and should be reliable sources of carbohydrates. Rawhide bones should be avoided in your Bulldog’s meals. You can, however, feed your dog some biscuits as treats on occasion.
The amount of food that you give your dog should be monitored. You will have to observe and monitor your English Bulldog as each of them have special and individual needs.

The dogs require regular grooming. You will have to invest your time in your Bulldog’s maintenance and grooming about four times a week. Their short fur hair needs to be brushed, trimmed, and plucked weekly. Moreover, it is also necessary to regularly clean the folds in your dog’s skin and their wrinkled face to avoid any hidden infections. Bulldogs also need to have their ears cleaned regularly.

The Bulldog is known to be a ‘not-so-easy’ dog breed to train. It is very stubborn and resisting in such a case. They usually do not care about what their owner wants them to do – thus making the training exceedingly difficult.

To start the training of your dog, however, you could start with basic commands and see if your dog follows them. Once the dog starts understanding simple commands, you can move on to the more complex commands. This could, however, take some time, given the stubborn resistance of these dogs towards training.

The Bulldogs usually need about an hour of exercise daily. However, the amount also varies from dog to dog and is especially dependent on their size.

At first glance, these dogs might look lazy and lethargic. However, they can surprise you with their speed skills while exercising. Your bulldog would still most likely enjoy being lazy on your couch the most.

Bulldog puppies are extremely cute with a wrinkled face. They are tiny and stocky and have a lot of extra skin. The puppies must be fed much more often than the adult ones. However, their nutrition and the amount of food that is given to them have to be properly monitored else the puppies can gain a lot of extra weight in no time.

Bulldog puppies also tend to heat up faster than the adult ones, which is why you should always keep cool and clean water around them for better reach for when they might need it.

Bulldogs love children and are extra playful around them. They are known to be affectionate, kind, and loyal creatures and make great family dogs. These dogs are particularly known to be patient around children and are also said to have motherly instincts and are very protective of them.

Some dogs that are very similar to these dogs are:

There are several famous bulldogs in the history of the world. Some of them include – Tillman, who was a skateboarding English bulldog and holds a Guinness World Record, Uga, who is the official mascot of the Georgia Bulldogs University and the old boy – who was the loving famous bulldog of Republican President William G. Several famous personalities too have these dogs as pets. Some of them include Ozzy Osbourne, Adam Sandler, Joe Jonas, Brad Pit, Olivia Wilde, and Willow Smith. Former British Prime Minister Winston Churchill also loved bulldogs. The term “British Bulldog spirit” symbolized courage especially gained momentum after Churchill came to power.

Some of the most popular names for these dogs are:

How much does a bulldog cost to own?

Is the bulldog good with kids?

Yes, bulldogs are exceptionally good with children. They are very affectionate and protective of children and have motherly instincts.

How long does a bulldog live?

On average, bulldogs live for about 8 to 10 years.

How big do bulldogs get?

Female and male bulldogs both are usually just 12 to 14 inches.

Bulldogs are rarely dangerous and are hardly ever aggressive. They are very loving, kind, and friendly.

Are Bulldogs easy to train?

No, bulldogs are difficult to train and can be very stubborn and resistant to the idea of training.

How many types of bulldogs are there?

There are three types of bulldogs – the English bulldog, the American bulldog, and the French bulldog.

Are Bulldogs herbivores, carnivores, or omnivores?

Bulldogs are Omnivores, meaning they eat both plants and other animals.

What Kingdom do Bulldogs belong to?

Bulldogs belong to the Kingdom Animalia.

What class do Bulldogs belong to?

Bulldogs belong to the class Mammalia.

What phylum to Bulldogs belong to?

Bulldogs belong to the phylum Chordata.

What family do Bulldogs belong to?

Bulldogs belong to the family Canidae.

What order do Bulldogs belong to?

Bulldogs belong to the order Carnivora.

What genus do Bulldogs belong to?

Bulldogs belong to the genus Canis.

What type of covering do Bulldogs have?

Bulldogs are covered in Hair.

How many babies do Bulldogs have?

The average number of babies a Bulldog has is 10.

What is an interesting fact about Bulldogs?

Bulldogs are friendly, loving, and docile!

What is the scientific name for the Bulldog?

The scientific name for the Bulldog is Canis lupus.