Click through all of our Bernese Mountain Dog images in the gallery. 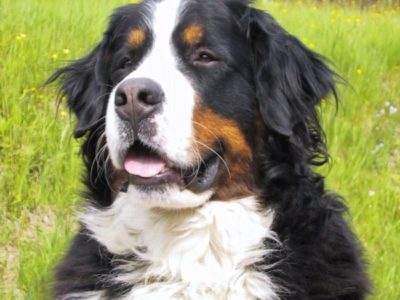 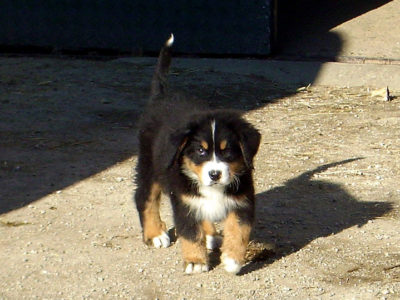 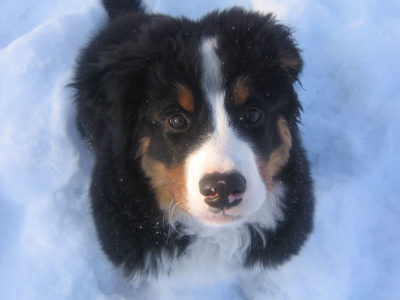 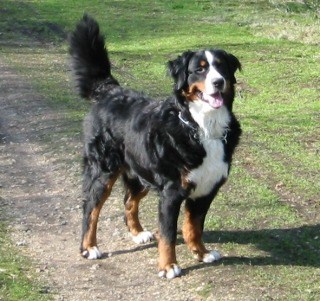 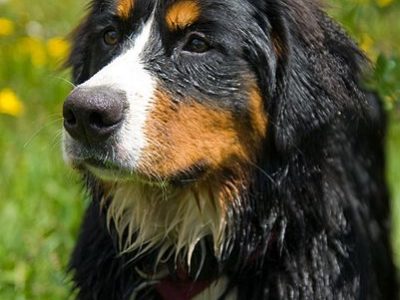 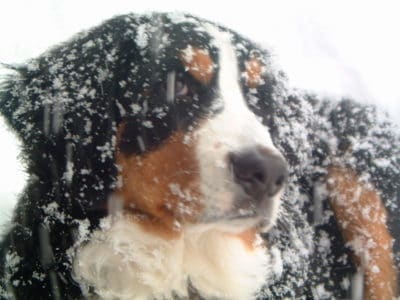 View all of the Bernese Mountain Dog images!

Reaching 27 inches tall at the shoulder, the Bernese mountain dog is known to be a large and strong animal that comes from the canton of Bern, thus giving it the name. It is covered in a thick, long fur coat which is a mix of three colors — jet black, white, and rust — giving it a royal look. These dogs thrive best in cold weather, which is particularly nice considering the thick layer of fur that they have. They are known to be friendly creatures and get along very well with most families they’re a part of. However, they are particularly known to get attached to one person they are close to.

These dogs are extremely hardworking and can be traced back to the farmlands of Switzerland. History says that their ancestors were brought to the Swiss mountains by the Roman around 2,000 years ago. It is said that they were earlier trained to work in the farms, pull carts, and herd cattle. Apart from that, they are known to be very loyal and are often useful to become watchdogs for people. They belong to the group of Swiss mountain dogs are one of the four types in that category. However, theirs is the only type that has long hair as a distinct feature. They are usually calm and are known to be obedient and very intelligent. Their high energy levels could often be a problem if you are handling them for the first time.

Known as a dry-mouthed breed of dogs, these animals are muscular and have long hair. The average height of such dogs ranges from 25-27 inches in males and 22-25 inches in females.

These dogs are at an extremely high risk of cancer that could be fatal, more so than other breeds. Studies suggest that the cancer is so severe in these dogs that nearly half of the total population of the breed succumbs to the life-threatening disease. The lifespan of these dogs, therefore, depends a lot on the kind of diseases they are prone to.

Health and Entertainment for your Bernese Mountain Dog

Different types of cancers affect the Bernese mountain dog, including mast cell tumor (associated with the mast cells — usually occurring in the skin spleen, liver, or bone marrow), fibrosarcoma (related to fibrous connective tissues), malignant histiocytosis (impacts the lungs and lymph nodes), and osteosarcoma (originates in the cells that are known to help in making bones). Another kind of cancer that is common in the breed is a type of disease that impacts the muscle, known as histiocytic sarcoma.

Apart from cancer, there are multiple types of inherited eye-related problems that affect this community of dogs, including, cataracts, progressive retinal atrophy, hypo myelinogenesis, and hypoadrenocorticism, causing the lifespan of these dogs to be cut short.

These dogs are also prone to death due to musculoskeletal causes like arthritis and hip dysplasia. Cruciate ligament rupture may also be a cause of death among these dogs.

Diseases that most commonly affect the Bernese mountain dog:

If adopted as a rescue, the breed may be mixed with other types of dogs as well. Always bring the dog to a veterinarian for a clearer view of their health.

Their behavior is generally calm and composed, and patience is a very prominent personality trait. However, it is also said that these dogs mature relatively slower than the rest of the dog breeds, which could mean that the dog owners might have to deal with puppy-like behavior for a longer period than expected. Since they get attached to one particular member in the family more than others, these traits could often be a problem with young children as larger dogs could knock them over, potentially causing injury. However, their playful nature could be very well accepted by mature adults.

How to Take Care of a Bernese Mountain Dog

Anyone that takes on the responsibility of this breed of dog (even rescue puppies or a mix of this breed and another) must consider their health risks and general demeanor. This breed has a proclivity for developing cancer as one of its main health risks. Plus, with its slow maturing, owners may experience more puppy-like behavior for longer than other breeds.

Quality food matters for this breed. It is particularly necessary to choose the right kind of food to keep the dog breed up and running in the best health conditions. Bernese mountain dogs have a love of fresh food, enjoying produce like carrots, broccoli, squash, and pumpkin. Many of these foods are excellent sources of digestive enzymes that can soothe their stomach. In lesser amounts, yogurt and lean, cooked meat are acceptable. Superior quality food also promotes growth in these dogs and makes their bones strong and helps with digestion. Moreover, the right kind of food helps in weight management and helps in preventing injuries or illness in the dogs. Foods high in fats, fibers, and crude proteins are known to be the best foods for such dogs. Bernese puppies require quality food to grow into strong, mature, and healthy adults. Typically, a Bernese puppy should be fed dry food with about 25 to 27 percent protein and 15 to 16 percent fat. Freshwater would be another beneficial addition to the diet. The best diet for an adult Bernese mountain dog would include natural and homemade foods like meat, grains, and fresh vegetables.

Like any other pets, this breed of dog requires grooming from time to time. Maintaining an appropriate nail length shouldn’t take more than a trim every two weeks, which requires a special nail trimmer designed especially for dogs. Pet owners should also brush their dog’s teeth every day. For this purpose, you can look up kits with proper toothpaste and toothbrush for your dog. Because these dogs are accustomed to having thick fur, it is often not advised that you shave your Bernese mountain dog. The thick coat of fur that covers the dogs often poses a problem for the owners as this breed of dogs tend to shed their fur heavily twice a year. During these heavy shedding periods, most dogs need to be groomed every four weeks. Between these shedding seasons, the most amount of time these dogs should go is about eight weeks, due to their longer guard coat.

Bernese mountain dogs are typically easy to train. However, because they are extremely sensitive, they are usually unlikely to respond to harsh training methods. They are also known to be family-oriented animals and therefore, you should expect to see a change in their behaviors if they are left alone for long periods.

Because they are so large, this breed needs moderate amounts of exercise for at least half an hour every day. This would help the animal to stay happy and healthy at the same time. This breed is particularly known for wanting to live indoors, though they are also known to make great company for long treks or hikes. Because of the traits that they might have picked up from their origins, these dogs are very comfortable with pulling carts for children, Some have even been known to participate in carting competitions.

Adopting a pure-bred or rescue Bernese mountain dog can be exciting, but the first 24 hours are crucial. All puppies are rather curious about their new homes, and they should begin leash training as soon as possible to establish the alpha between pet owner and puppy. Considering how long this dog remains at the puppy stage mentally, be patient, and provide at least 30 minutes of exercise a day. Though small, these puppies have quite an appetite. Though no supplementation should be given to a Bernese puppy at least in the first six months, they will need two meals a day while they grow.

Various dog breeds are remarkably similar to Bernese mountain dogs. Some of them include:

The Bernese mountain dogs could have a variety of names. Some of them include:

With the lovable personality that a Bernese mountain dog exhibits, it has earned many spots in pop culture and Hollywood. Ben Roethlisberger’s dog, Hercules, is a Bernese mountain dog, and he’s resided with the quarterback for over a decade. Michael D. Higgins, the President of Ireland, owned two Bernese mountain dogs as well — Bród and Sioda — though the latter passed in September 2020. This type of dog has been featured on the small screen as well in a TV series called “The New Normal.” The lead characters, Bryan and David (played by Andrew Rannells and Justin Bartha, respectively), gave the dogs the names Smelly and Harvey Milkbone.

How much does a Bernese Mountain Dog cost to own?

Is a Bernese Mountain Dog good with kids?

Yes, the Bernese mountain dogs are great with children. They are friendly and are often playful around kids.

How long does a Bernese Mountain Dog live?

How much does a Bernese mountain dog weigh?

How big is a Bernese mountain dog?

A Bernese mountain dog is huge and stands 27 inches tall till its shoulders.

Is a Bernese mountain dog a good family dog?

Why do Bernese mountain dogs have a short lifespan?

Their short lifespan could be related to a host of diseases that the Bernese mountain dogs are prone to.

Bernese Mountain Dogs are Omnivores, meaning they eat both plants and other animals.

What Kingdom do Bernese Mountain Dogs belong to?

What class do Bernese Mountain Dogs belong to?

What phylum to Bernese Mountain Dogs belong to?

What family do Bernese Mountain Dogs belong to?

What order do Bernese Mountain Dogs belong to?

What genus do Bernese Mountain Dogs belong to?

What type of covering do Bernese Mountain Dogs have?

How many babies do Bernese Mountain Dogs have?

The average number of babies a Bernese Mountain Dog has is 7.

What is an interesting fact about Bernese Mountain Dogs?

What is the scientific name for the Bernese Mountain Dog?

The scientific name for the Bernese Mountain Dog is Canis Lupus.