Fun Fact
The Airedale may just be one of the most versatile dogs in the world. The Airedale was originally bred to catch vermin, but it became an all-around sporting dog with a mix of abilities as a pointer, spaniel, retriever, guide dog and police/military dog.
Distinctive Feature
Long muzzle and square body
Temperament
Friendly, adaptable and courageous
Training
Fairly Easy
Diet
Omnivore
Average Litter Size
8
Type
Terrier
Common Name
Airedale Terrier
Slogan
Very intelligent, independent and strong-minded!
Group
Dog

Click through all of our Airedale Terrier images in the gallery. 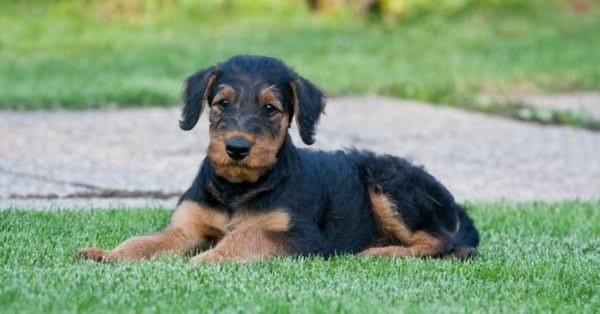 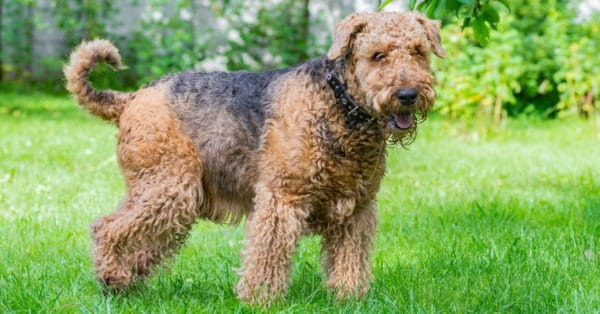 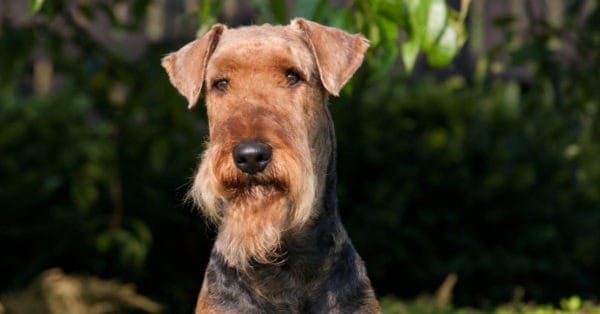 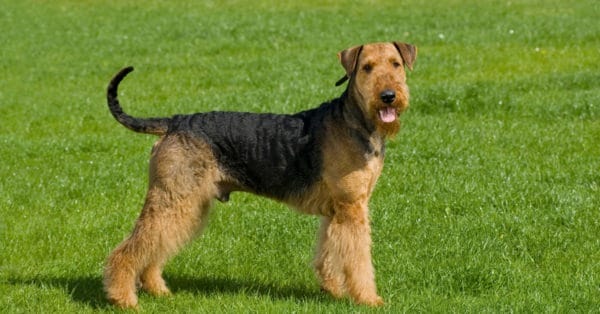 View all of the Airedale Terrier images!

This post may contain affiliate links to our partners for the Airedale Terrier and other pets. Purchasing through these helps us further the A-Z Animals mission to help us educate about the world’s species so we can all better care for them.

The Airedale Terrier’s main claim to fame is that it’s the biggest of all terriers. Known as the King of Terriers, the Airedale’s origins date back to the mid-19th century in England. The Yorkshire working-class wanted a tough, intelligent, large terrier type to pursue rats and vermin on farms and also to accompany hunting groups in the country. The Airedale was later used in Britain for applications such as a farm dog, guide dog, police dog, war dog, and hunting dog. The reliable and intelligent Airedale can make a great family pet.

Not only is the Airedale a versatile working breed, but it is also an excellent family guard dog and loyal companion. Airedales are known for being independent and highly intelligent. They need plenty of obedience training and places to expend their high energy.

3 pros and cons of owning an Airedale Terrier

The Airedale terrier is a medium-sized dog that usually weighs between 50 and 65 pounds, though it can weigh up to 80 pounds. Height for males is usually about 24 inches, with females being slightly shorter at 22-23 inches. There is an Oorang strain of Airedales that weighs in the 80 to 120-pound range. This strain of the breed was developed back in the 1920s. Airedale puppies typically weigh about 10 pounds and are 10 inches tall at the age of 8-10 weeks. Airedales don’t usually reach their full adult size until between one and two years of age.

The Airedale is a generally healthy breed, but they do have a few common health issues. It’s important to be aware of the breed’s potential health issues before pursuing a purchase. A good breeder should be able to show you health clearances for hip dysplasia, elbow dysplasia, von Willebrand’s disease, and hypothyroidism. The most common issues with Airedales are hip dysplasia and eye problems that result in vision loss. Hip dysplasia is a common problem in larger breeds and affects the dog’s ability to move around when they get older. Another problem to look out for in Airedales is gastric dilatation-volvulus, which is also commonly called bloat. It can happen if the dog exercises too soon after eating. Airedales may suffer from food and contact allergies as well. Lastly, von Willebrand’s disease is a blood clotting disorder that may affect Airedales between three and five years of age.

To sum up, the most common health issues with Airedale terriers are:

The Airedale’s most prevalent personality traits include independence, energy and stamina. Airedales exhibit fun-loving and active behavior, which can make them great for a high-energy family with kids. Airedales don’t like to be bored. Bored Airedales often engage in destructive behavior like chewing, barking and digging.

The Airedale’s personality is most affected by training, socialization and genetics. Puppies displaying the most positive traits of the breed will be curious, playful and friendly. As long as the Airedale is properly socialized and trained, they make good family dogs and reliable watchdogs.

How To Take Care of an Airedale Terrier

If you’re a new pet owner looking for how to care for Airedale terriers, especially Airedale puppies, then there are a few different factors to consider. Whether it’s common health issues like bloat or making sure they get enough exercise and things to interest them, the Airedale has specific needs.

The recommended amount for feeding an adult Airedale is 1.5 to 2.5 cups of dry food per day. These amounts should be divided into two meals. Airedale puppies should be fed about one cup of dry puppy food per day divided into two meals. You can use a mix of dry and wet food for your Airedale as well. Look for foods that have fish oil and glucosamine, which help the Airedale’s coat and joints. You can also use supplements if necessary.

The Airedale is known as a hypoallergenic breed as they shed rarely to a few times per year. Occasional brushing with a brush made for wiry coats can help remove these dead hairs and keep your Airedale looking civilized. Airedales really only need to visit the groomer once per year. Too much bathing can make the Airedale’s coat too soft. The coat can be trimmed with clippers or with a stripping knife. Most groomers use a mix of both techniques.

Compared to other breeds, the Airedale terrier is challenging to train. They are very independent with a stubborn streak. They need plenty of positive reinforcement and yelling or roughness doesn’t work well on them. However, Airedales are also very intelligent, which means they do respond to creative and stimulating training. Make sure to start training early to avoid any willfulness setting in.

Airedales need plenty of exercise and entertainment. They were bred as working dogs, and they will get bored easily if they have nothing to do. The best situation for an Airedale is a large property with a tall fence. Then they can run and explore to their heart’s content. If you don’t have that, you’ll have to ensure that your Airedale gets daily walks and/or time at a park where he can run free.

Airedale puppies need to be trained and socialized from a young age. They have a lot of energy and curiosity. They also like to chew, so it’s important that you provide plenty of approved chewing objects to keep them from finding shoes and furniture to chew on.

Airedales are typically good with children when socialized early. They have incredible protective instincts and can sense who is part of their family and who isn’t. They will often protect and guard their children when strangers are present. However, Airedale puppies are very rambunctious and larger than the average puppy, which means they can be too much for small children in some cases.

Other dog breeds similar to the Airedale terrier include poodles, Labradoodles and German shepherds.

• Poodle – The standard poodle is a similar size to an Airedale, and it is also hypoallergenic and very intelligent. Poodles are less energetic and feisty than Airedales.
• Labradoodle – Playful and with a hypoallergenic coat, the Labradoodle is a mix of the poodle and Labrador and combines the best traits of both breeds. They are intelligent and goofy.
• German Shepherd – Bred to be a working dog, the German Shepherd is larger than the Airedale and it does shed. However, they are very intelligent and can make good family dogs.

Male Airedales are often called names like Duke, Rocky, Laddie Boy,, and Buddy. Popular female names tend to be of Irish or British origin, such as Lottie, Maggie, or Tilly among others. Some other popular names for Airedales include the following:

Airedales have long been a popular dog in America, but they somewhat fly under the radar in terms of media coverage. However, there have been some famous examples of the breed through the years.

Laddie Boy was arguably the most famous Airedale and was doted on by an adoring country and press. “Letters” from the dog were published in the New York Times. President Harding loved his dog and had statues and portraits made of Laddie Boy.

John Wayne’s Airedale, Duke, was actually the origin of the actor’s famous nickname. The actor had the dog growing up, and people began calling Wayne Big Duke and the dog Little Duke.

Airedale Terriers are Omnivores, meaning they eat both plants and other animals.

What Kingdom do Airedale Terriers belong to?

What class do Airedale Terriers belong to?

What phylum to Airedale Terriers belong to?

What family do Airedale Terriers belong to?

What order do Airedale Terriers belong to?

What type of covering do Airedale Terriers have?

Airedale Terriers are covered in Hair.

What genus do Airedale Terriers belong to?

What are some distinguishing features of Airedale Terriers?

How many babies do Airedale Terriers have?

The average number of babies an Airedale Terrier has is 8.

What is an interesting fact about Airedale Terriers?

What is the scientific name for the Airedale Terrier?

The scientific name for the Airedale Terrier is Canis Lupus.

How much does the Airedale Terrier cost to own?

The initial price of an Airedale puppy is likely to be somewhere between $500 and $1,500. The average price is around $850. Per year expenses will be around $165 per month. You can save on the upfront cost by getting a rescue dog.

Is the Airedale Terrier good with kids?

How long does Airedale Terrier live?

Airedales can be great family dogs for active families as long as they are properly trained and socialized. They are very protective of children and are good watchdogs.

How much do Airedale terrier puppies cost?

On average, they cost about $850 from a breeder. You can pay less if you get a rescue dog.

Airedales should not be overly aggressive. Overly hostile Airedales are likely badly bred, untrained, or have been abused.

Some Airedales may like to cuddle, for example, older rescue dogs. But, in general, Airedales are very active and like to play and run.