Also known as the Asian Bearcat!

Click through all of our Binturong images in the gallery. 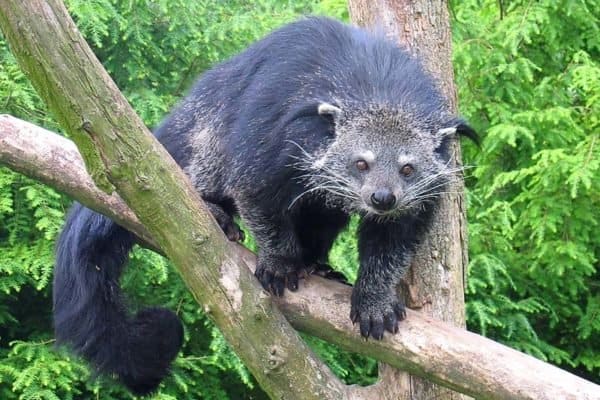 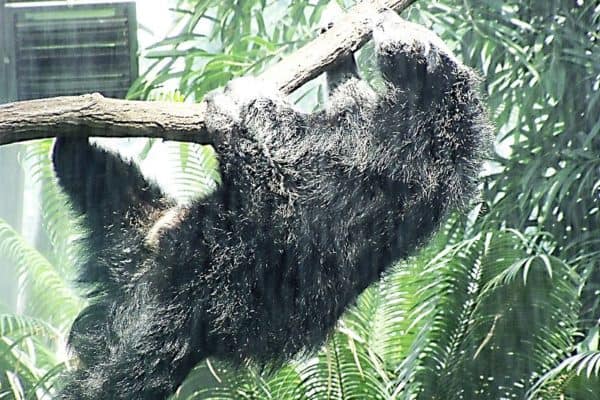 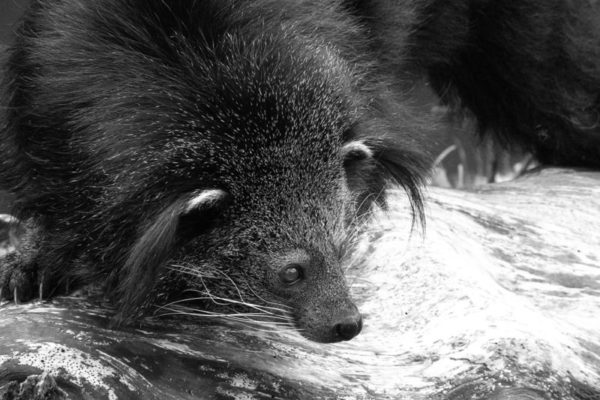 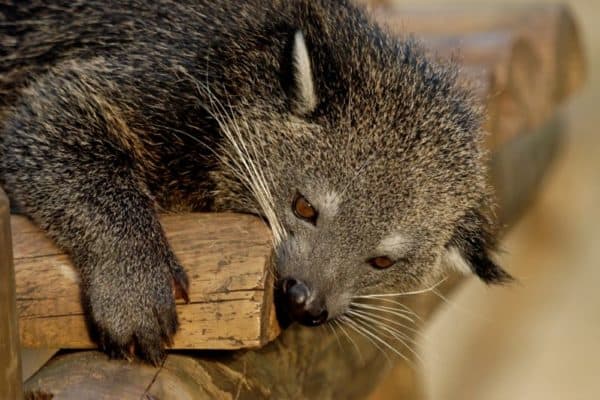 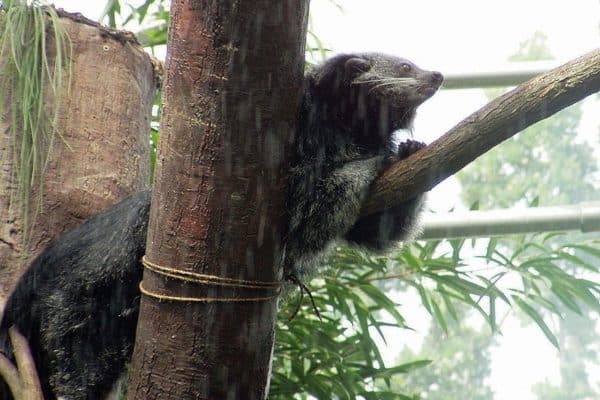 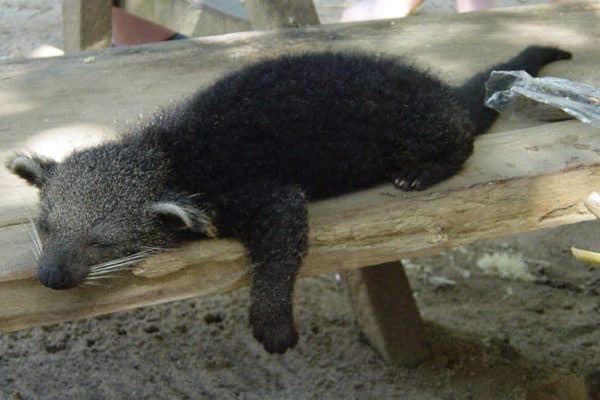 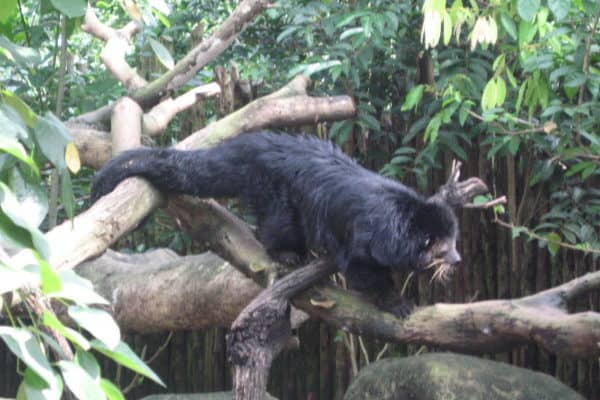 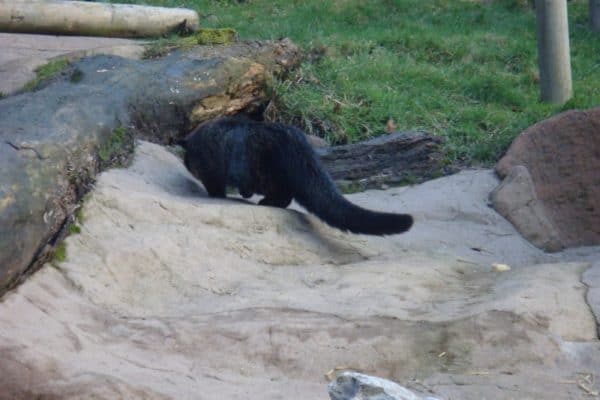 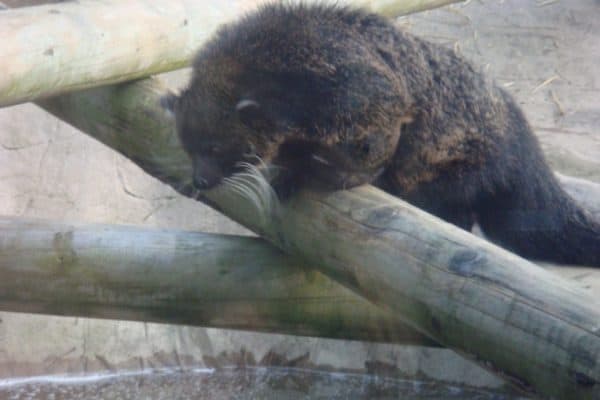 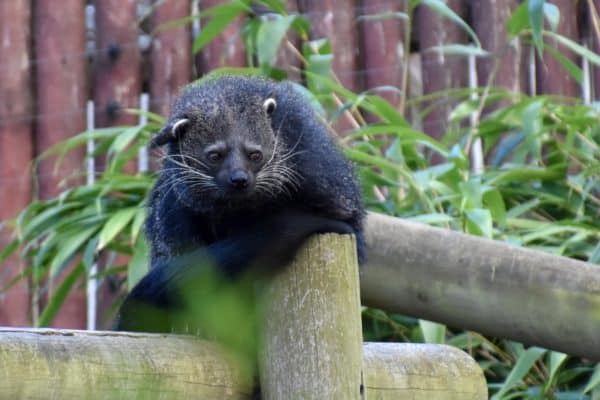 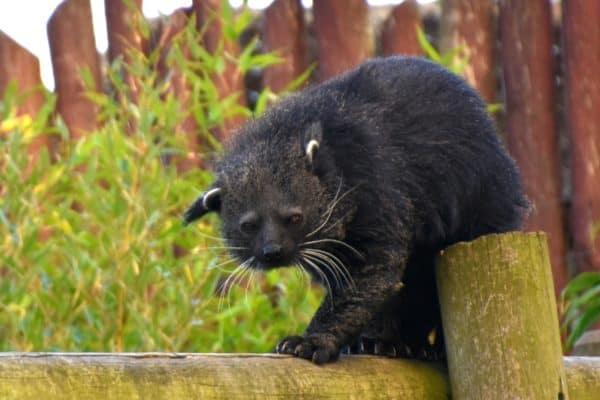 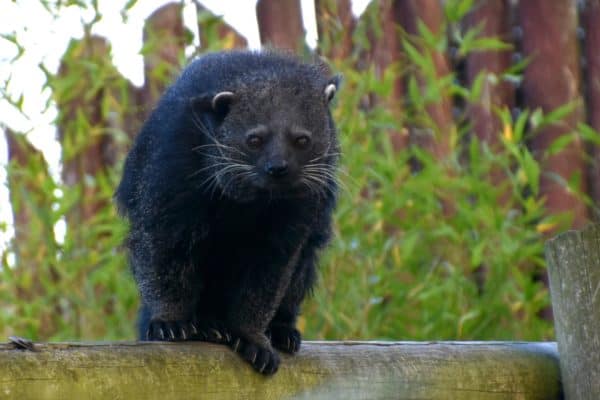 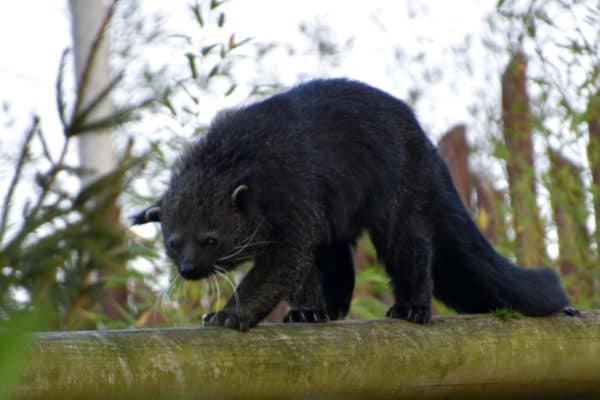 View all of the Binturong images!

The Binturong is a medium sized carnivore that is found inhabiting the dense forests of South-East Asia. They belong to the same family as other small carnivores including Civets, Genets, Mongooses and Fossa and share a number of characteristics with them including a long snout and having more teeth than most other carnivorous mammals. The Binturong is thought to be most closely related to the Palm Civet and is the largest member of this family. Also known as the Bearcat, the Asian Bearcat and the Asian Civet, the Binturong is an animal that was once commonly found throughout much of its historical range but sadly, today they are a rare find in the thick jungles and very little is actually known about their behaviour in the wild. There are nine different subspecies of Binturong which vary little in appearance but tend to be most easily distinguished by their size and geographic location.

The Binturong is a large, heavy animal that can grow to more than a meter long from their snout to the tip of their tail, with females being up to 20% bigger and heavier than their male counterparts. They have very long, coarse and shaggy fur which varies from dark brown to black in colour and is tipped with grey, along with tufts of long and dark straight hair which protrude beyond the tops of their ears. The Binturong (along with the Kinkajou of South America) is also unique among carnivorous mammals as they possess a prehensile tip to their tails, which acts almost like another leg helping both with climbing, and gripping onto branches to give the Binturong more stability. The Binturong also has long, white whiskers that are thick and sensitive and are found both on their checks and above their brown eyes.

The Binturong is an animal that was once natively found throughout China, India, Thailand, Cambodia, Laos, Malaysia, Indonesia, the Philippines and on the island of Borneo, and although there are populations still found in a number of these countries, their numbers have been declining and the Binturong can now be extraordinarily hard to spot. Found in dense, moist jungles and in areas that are close to a slow-moving water source, the Binturong has been most affected by habitat loss particularly in the more southern parts of its natural range. Towards the north however where the rate of deforestation is not quite as ferocious, they have been more affected by hunting and capture as well as generally expanding Human populations. The Binturong relies heavily on dense, thick forest where there is plenty of cover both in the trees and on the ground and with a big decline in its native jungles, this mammal simply has fewer places to go.

The Binturong is a generally solitary and nocturnal animal that spends the majority of its time moving about slowly and cautiously amongst the trees. Due to their large size the Binturong cannot leap between one tree and another and so must climb down to the ground to go from tree to tree. They are excellent climbers and are well aided by their strong feet, agile bodies, semi-retractable claws and their prehensile tail. The Binturong is also known to both swim and dive well and often spends time in the water to simply cool down in the heat of the sun. Although they do tend to be mainly solitary, small groups of Binturong are not uncommon and usually consist of an adult pair and their young. As with the hierarchy in Mongoose society however, it is the female Binturong who remains the dominant adult. The Binturong is known to be a very vocal animal and makes a number of sounds to both communicate with other Binturongs and to warn off species that it sees to be a threat. They are known to make chuckling sounds when they seem to be happy and appear to utter a high-pitched wail if they become aggravated.

Although there is not thought to be a mating season as such, there are thought to be higher instances between February and April and then later in July and November. After a gestation period that lasts for around 3 months, the female Binturong climbs down to the ground to nest in thick vegetation that is sheltered both from the elements but is also out of sight of passing predators. Between 1 and 3 small cubs are born that measure about the size of a Human fist. Like a number of other mammalian young, BInturongs are born blind and cannot hear and rely solely on their mother to provide them with milk. They are usually weaned by the time they are 2 months old and reach their adult size after a year. The Binturong is thought to live for between 10 and 15 years in the wild but can happily reach older ages in captivity with one individual having died at the age of 26.

Despite belonging to the carnivorous mammal group, the Binturong is mainly frugivorous meaning that it survives primarily on a diet that is comprised of fruit. Although they are also known to hunt insects, birds and rodents which they stalk in a cat-like manner amongst the branches, the Binturong has evolved well to eating in the trees with front feet that are not only designed to climb and dig, but they can also hold onto fruit and even open it with their agile toes. The Binturong primarily hunts for food under the cover of night but is also known to feed whilst resting in the trees in the heat of the day. Due to their ability to swim and dive well, the Binturong also hunts fish in the water when cooling down in the heat of the day.

The Binturong is a relatively large and slow-moving animal, yet it is not really a main source of prey to the predators that also inhabit the dense, surrounding jungle. Larger animals such as Tigers and Snakes would pose the biggest threat to the Binturong adults, along with Birds of Prey and small carnivores that could easily target one of the young cubs. The biggest threat to the world’s Binturong population though is people and in a number of ways. The Binturong has been caught for their meat, captured and sold into the pet trade, subjected to vast habitat loss (mainly in the form of deforestation), and is also trapped and caught to be sold into the Chinese medicine market, where a number of their body parts are used in traditional remedies.

Like other members of the Civet family, the Binturong has scent glands which are located just under its tail. These glands are used to mark trees and foliage to outline an individual’s territory and is distributed whilst the Binturong is moving about. Oddly enough, the odour of this scent is said to smell like popcorn as are Binturong cubs when they are newborn. Until they became stronger and are more aware of their surroundings, young Binturong are incredibly vulnerable and are able to spray foul smelling liquid (like a Skunk) when they are really frightened. This is not a behaviour however that has been observed in individuals who are more than a couple of months old, because as they get bigger they are able to defend themselves more easily. When climbing, the Binturong is actually able to rotate its hind legs backwards so that their claws still have a good grip when climbing down a tree head first.

This tree-dwelling mammal is actually known to be startlingly passive towards people and has been easily domesticated and kept as an exotic pet all over the world. However, it is this industry that along with other factors, has aided in the rapid decline of Binturong population numbers throughout South-East Asia. Not only having been over-exploited as pets, zoo attractions, in medicines and for food, the Binturong is also subjected to devastating loss of vast areas of its natural habitat which has pushed the remaining populations into smaller and smaller pockets of their once large historical range. Both growing Human settlements and forest clearance for agriculture are the main culprits and seeing as the Binturong needs dense jungle to successfully survive, plantations provide no sanctuary in their dwindling homelands.

Today, the Binturong is rarely seen in the wild with just a handful of sightings having been reported over the past decade. The Binturong is listed by the IUCN as a species that is Vulnerable from extinction in its natural environment in the near future. Human encroachment on their historical habitats has meant that numbers have declined drastically and along with their capture still in many parts, has led to a 30% decline in Binturong population numbers in the last 30 years.

Are Binturongs herbivores, carnivores, or omnivores?

Binturongs are Omnivores, meaning they eat both plants and other animals.

What Kingdom do Binturongs belong to?

Binturongs belong to the Kingdom Animalia.

What class do Binturongs belong to?

Binturongs belong to the class Mammalia.

What phylum to Binturongs belong to?

Binturongs belong to the phylum Chordata.

What family do Binturongs belong to?

Binturongs belong to the family Viverridae.

What order do Binturongs belong to?

Binturongs belong to the order Carnivora.

What type of covering do Binturongs have?

Binturongs are covered in Fur.

What genus do Binturongs belong to?

Binturongs belong to the genus Arctictis.

Where do Binturongs live?

Binturongs are found throughout southeast Asia.

In what type of habitat do Binturongs live?

What are some predators of Binturongs?

Predators of Binturongs include humans, tigers, and snakes.

How many babies do Binturongs have?

The average number of babies a Binturong has is 2.

What is an interesting fact about Binturongs?

The Binturong is also known as the Asian Bearcat!

What is the scientific name for the Binturong?

The scientific name for the Binturong is Arctictis binturong.

What is the lifespan of a Binturong?

What is a baby Binturong called?

A baby Binturong is called a cub.

How many species of Binturong are there?

There are 9 species of Binturong.

What is the lifespan of a Binturong?

What is a baby Binturong called?

A baby Binturong is called a cub.

How many species of Binturong are there?

There are 9 species of Binturong.

What is the biggest threat to the Binturong?

The biggest threats to the Binturong are habitat loss and capture.

What is another name for the Binturong?

The Binturong is also called the bearcat, Asian bearcat, or Asian civet.

How fast is a Binturong?

A Binturong can travel at speeds of up to 15 miles per hour.

How to say Binturong in ...