The lion, tiger, leopard, and jaguar are famous for their roars, a function of the architecture of their larynxes and hyoid bones. But the cougar, the snow leopard, the clouded leopard, and the cheetah lack this architecture and chirrup and even purr rather like house cats. Save the clouded leopard, big wild cats also differ from house cats in that they have round pupils while the pupils of house cats are vertical slits. Other than that, big cats and house cats are surprisingly similar. They both sleep a lot, have amazing senses of smell, and are obligate carnivores. Read on for more facts and information about all types of big cats.

Known for the male’s amazing and majestic mane, the lion is also unusual among all types of big cats in that it lives in social groups called prides. Most other big cats are solitary save for mothers and cubs. Lions are found in the grasslands of Africa and a small region of India. The organization of most prides is a few unrelated or related males, females, and cubs. The males’ job is to protect the pride from being taken over by another group of males, while the females hunt and raise cubs. Most coalitions of males last about three years before they’re ousted by another coalition. Because of this, the lifespan of male lions is much shorter than that of females. Males live about 10 years while females can live as long as 18 years.

Lions are famous for their tawny coats, which camouflage them in the grass while they hunt. The body length ranges between 7.87 and 10.83 feet, and that’s without the tail, which ranges between 2.4 to 3 feet long. Females weigh about 277.5 pounds while big males can weigh close to 600 pounds. There are two subspecies of lion, the nominate Panthera leo leo found in Asia and West and Central Africa, and Panthera leo melanochaita, which is found in eastern and southern Africa. Because of poaching and habitat destruction, the lion’s conservation status is vulnerable.

Lionesses coordinate their hunts, which let them take down large prey such as zebras, wildebeests, and the notoriously dangerous African buffalo.

Read here for more facts about the lion.

Of all types of big cats, the tiger is the largest in size. It is in even more peril than the lion, and its conservation status overall is endangered. Once ranging from India, Indonesia, and Southeast Asia, and China, it is now confined to small areas in its former range. Stunningly beautiful animals, tigers have orange-red coats with dramatic vertical black stripes that are most prominent on the shoulders and sides. The underside of the animal is white. There’s also white on the cheeks and above the eyes, and white spots on the back of the ears, which are often black.

The black or brown stripes of a tiger help them hunt undetected through camouflage. These massive predators do their main hunting at night. While tigers look orange to humans, their colorblind prey, such as deer, can only see colors green and blue. So, the orange fur doesn’t stand out. Couple this fact with vertical stripes, and lions completely blend in with trees and tall grasses.

The Siberian tiger is the largest of the tigers. It’s found in Siberia and Manchuria and has a dense pelt to protect it against the cold. Males usually weigh between 397 and 675 pounds while females weigh about 220 to 368 pounds. Males can be about 12 feet long and females can grow to 7.87 feet long. The cat is powerful enough for a single large adult to take down a gaur, the largest of the cattle.

Read this for more facts about the tiger.

Thanks to its anatomy, especially the unique flexibility of its spine, the cheetah are considered the fastest land animal. It can achieve short bursts of speed between 58 and 61 miles per hour, which it uses to take down fast prey such as Thomson’s gazelle. This beautiful animal is also vulnerable because of habitat loss and human interference. Some populations are so inbred that the animals are also subject to diseases. It is found in Africa and Iran.

Built for speed, the cheetah has a long body, very long legs, and a long tail that seems to help it balance when it makes tight turns. Its fur is tawny, buff, or grayish and covered with dots. The head is small for the body and round, and there are black stripes running from the eyes to the mouth. It ranges in body length from 3.5 to 5 feet and weighs 46 to as much as 160 pounds. There are five subspecies of the cheetah as well as the king cheetah, a mutation that has large spots and three stripes on the back. People used to think this animal wasn’t even one of the big cat breeds but a hyena/leopard hybrid.

To learn about the cheetah, go here.

This big cat also called the ounce is native to the Himalayas. It used to be the only one of the big cat breeds in the Uncia genus but was moved to Panthera. Its conservation status is vulnerable.

The snow leopard has a dense, fluffy white to gray coat that bears rosettes on the back, the sides, and the tail. There are black spots on the animal’s head and neck, and the belly is a dirty white. Like the cheetah, the snow leopard’s head is small for its body and round. Unlike the cheetah, the snow leopard has a robust body and short legs for moving around the cliffs of the mountains where it lives. Its body ranges from 3.25 to 4.25 feet with a tail that can be 31 to 41 inches long, and it weighs between 55 and 165 pounds. It has large, furry paws that help it walk over snow and a fluffy, long tail that stores fat and can protect the cat’s face when it sleeps.

Read this for more information about the snow leopard.

The jaguar is a big cat that lives in the jungle. Specifically, it lives in the jungles of Central and South America and is the only member of the Panthera genus to do so, though it is also found in the grasslands and savannas. This near-threatened cat is often confused with the leopard, but it is a much stockier animal. Like the leopard, its coat is covered in rosettes, though it has broken spots down its spine. Its head is large for its size, its tail is shorter than a leopard’s, and its hindquarters are powerful. As with the leopard, melanistic jaguars, or black panthers, are fairly common.

The jaguar ranges in boy length from 3.5 to 6.25 feet and can weigh between 79 to as much as 350 pounds. The cat’s power is reflected in its killing technique. It can bite through the shell of a turtle and kills other prey by biting right through the skull to the brain, something none of the other big cat breeds seem capable of. Its usual prey includes the capybara, agoutis, and collared peccaries. It is a good swimmer and will even take caimans.

For more information about the jaguar, read this.

This big cat has several names, including cougar, catamount, panther, painter, or puma. Like the jaguar, it’s found in the New World and is a bit smaller, though it does share the other wild cat’s small head and muscular body. Interestingly, some biologists don’t consider the mountain lion one of the big cats just because it doesn’t roar. Yet, it is a large animal with a body length of between 3.6 and 6.5 feet long with a weight of 150 to 230 pounds. Despite this, the mountain lion isn’t always the apex predator in its range, and its kill is sometimes stolen by wolf and coyote packs, bears, and alligators.

Though baby mountain lions are born with spots, they lose them as they get older. Adults are brown, with white around the mouth. Though it has been persecuted for centuries and its habitat has been fragmented, this big cat is amazingly adaptable and its status is least concern. Its main prey is mule deer.

Read this article for facts about the mountain lion.

The leopard is a skillful hunter, but like the mountain lion, it’s not always the apex predator in its range. It often has to compete with hyenas and lions. Though it is vulnerable, it has a wider range than the other big cats of the Old World and is found in sub-Saharan Africa, Asia, Russia, India, Southeast Asia, and east Asia. There are eight subspecies that look a bit different from each other, with leopards from colder climates having lighter fur than those that live in the jungle and rainforest. Overall, the leopard is vulnerable.

The nominate species of leopard, the African leopard is between 3 and 6.5 feet long sans tail and weighs between 82 and 200 pounds. It is well-muscled but not as much as the jaguar, and its tail is longer. Its head is broad but still proportional to its body. The leopard likes to hunt at night, and though it chases after its prey it will also fall upon them from a tree. Leopards often cache larger prey, which includes antelopes, baby giraffes, and even cheetahs, in their tree to save for later.

Clouded leopards are considered the smallest of the big cats. The cat has a body length is between 2.25 and 3.5 feet and a tail that’s almost as long. This tail helps it balance as it moves among the trees in the Himalayan foothills. Like a squirrel, the clouded leopard can climb down a tree headfirst. This cat weighs between 35 and 51 pounds. Like a house cat, its pupils are vertical slits, and it can purr.

The cat has a powerful bite for its size and takes such large animals as Indian hog deer, binturongs, and pangolins.

It gets its name because the dark, black-bordered patches on its coat resemble clouds, and the ground color of the coat can be silver, tawny or gray. The clouded leopard is hunted for its teeth and claws and for the beauty of its coat. Its habitat is also fast disappearing. Because of this, it is vulnerable, even though it is now protected in Myanmar.

Check out others on our lists of the biggest!

How many types of big cats are there?

There are probably about eight big wild cats. Four of them definitely are the lion, the tiger, the leopard, and the jaguar. Some people believe these are the only big cats because they can roar. To these people cougars, snow leopards, cloud leopards, and cheetahs are just larger types of smaller wild cats.

What types of big cats live in the tropical rainforest?

Jaguars and leopards are found in the tropical rainforest. 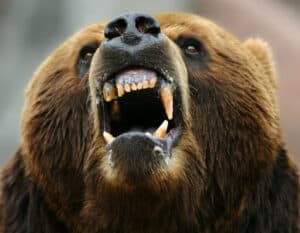