The kinkajou is a nimble forest-dwelling mammal of Central and South America. Click through all of our Kinkajou images in the gallery. 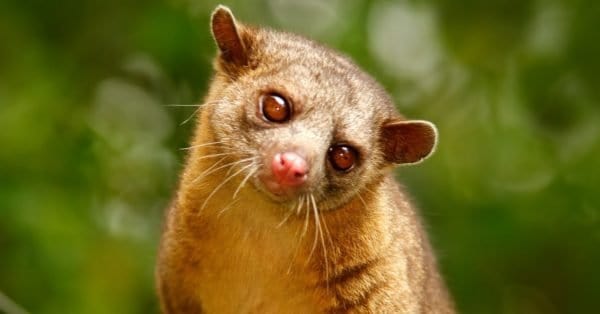 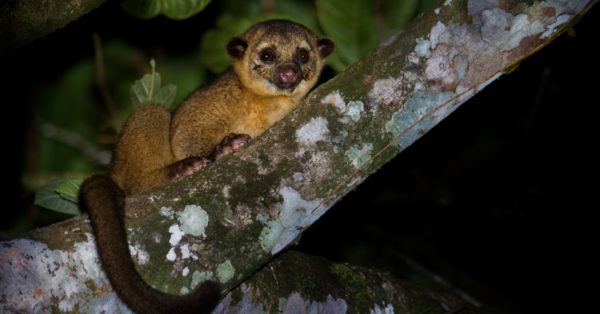 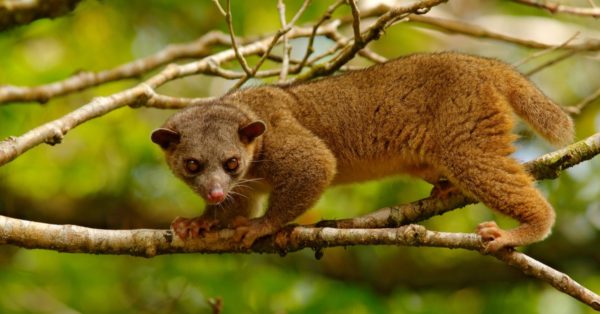 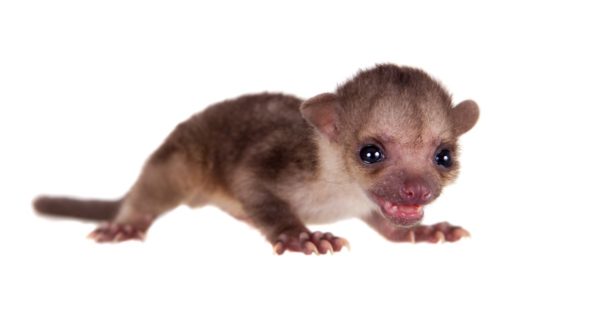 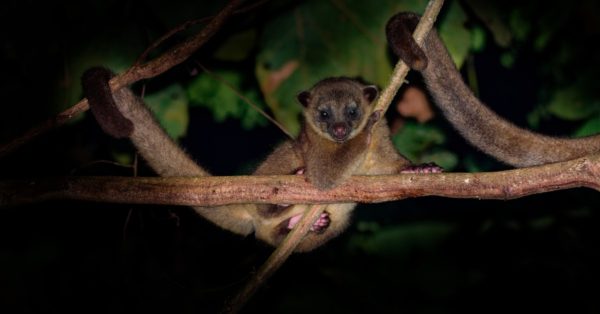 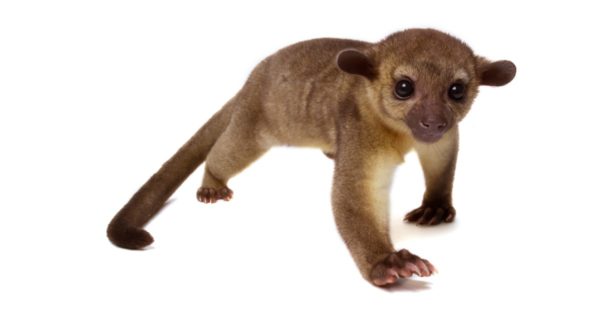 View all of the Kinkajou images!

The kinkajou is a nimble forest-dwelling mammal of Central and South America.

Because of its prehensile tail and hand-like feet, people originally mistook the kinkajou for a type of primate or lemur, but it actually belongs to the same order, Carnivora, as dogs, cats, and bears. Arboreal in nature, this loud, chattering species is often heard but rarely seen. This makes them very difficult to study in detail. Much of the facts we know about them come from studies done in captivity.

The scientific name of the kinkajou is Potos flavus. The genus name Potos, of which the kinkajou is the only living member, has an unknown origin. Flavus means yellow or blonde in Latin, which refers to the kinkajou’s fur color. What many people may not know is that the kinkajou is part of the same family, Procyonidae, as the raccoons and the olingos. These species are united together by a common set of traits, including their small size, long tail, omnivorous diet, and tree-climbing ability (they also evolved around Central and South America). Eight different subspecies of kinkajous have been proposed based on geographical region.

The kinkajou can be distinguished by the long body, rounded head and ears, a short muzzle, slightly webbed feet, sharp claws, and distinctive fingers on the hands. The kinkajou’s most important feature, however, is its long prehensile tail, which acts as a sort of third limb that can grip objects or branches. It’s so strong that the kinkajou can hang upside down while feeding. The tail also functions as the main means of balance and a sort of blanket that keeps it warm during cold nights.

The kinkajou has evolved several other adaptations that allow it to move nimbly through the trees. Thanks to the remarkably flexible spine, it has the ability to pivot almost a full 180 degrees between the pelvis and head. The kinkajou also has the ability to turn its feet in the opposite direction and run backward, so it can easily climb up and down trees head first.

The dense, wooly fur, which helps to keep the skin dry against the constant rainfall, is normally colored brown, but it can also vary in color by region from a duller sort of grey to a lighter shade of yellow. The big round eyes are able to reflect light, which gives them a bright orange appearance.

The kinkajou is relatively small compared with many other types of Carnivoras. The body measures about 16 to 30 inches long, its tail adds another 15 to 22 inches, and it only weighs about 3 to 10 pounds in total. There are few differences in size and appearance between males and females.

The kinkajou was once thought to be a solitary animal with very loose ties to other members of its species. However, after further study, it was revealed that they do in fact have a rich social life revolving around small groups called troops. These groups, which consist of two males (both a dominant and subordinate male), a female, and the offspring, offer joint protection and mating opportunities. Their bond is strengthened through frequent playtime, grooming, and socialization. Kinkajous communicate with each other through very loud and conspicuous vocalizations, including hisses, barks, squeaks, and grunts. Each sound seems to have a specific purpose, but its exact nature is poorly understood.

The kinkajou spends most of its life in the upper canopies of trees and rarely comes down to the ground except for the occasional forays for food. With its dexterous limbs, the kinkajou can leap from branch to branch with surprising ease. They come out at night to feed and then sleep in hollow nooks or nests during the day with the rest of the group.

The kinkajou relies on scent glands on the mouth, throat, and abdomen to mark their territory and attract mates. This territory is usually just large enough to support the nutritional requirements of the small group. It’s been suggested that the main role of the subordinate male is to enforce the territorial boundaries and threaten trespassers, but this hasn’t been studied in enough detail yet.

The kinkajou lives in the tropical rainforests, evergreen forests, coastal forests, and even the dry forests of Central and South America. Its natural territory stretches between Mexico in the north and Brazil or Bolivia in the south. The kinkajous can be found at altitudes of up to 8,000 feet high, though usually much closer to sea level.

Although the kinkajou is considered to be an omnivorous species, the evidence suggests that most of its diet actually consists of fruit. Kinkajous play an important ecological role by dispersing seeds and pollens around the environment.

What does the kinkajou eat?

Kinkajous are major consumers of fruit. They appear to choose the type of fruit-based on abundance and availability rather than any other characteristics related to size, color, taste, etc. When it isn’t foraging for fruit, the kinkajou has multiple other means of obtaining food. It can raid bee nests for its honey, drink nectar from flowers, or hunt for small mammals or insects by using its sharp claws to subdue and kill prey. The long tongue is also a very important instrument that helps it reach otherwise inaccessible crevices and holes.

Kinkajous actually face few natural predators in the wild. They are far more vulnerable to poachers and hunters who seek them out for their fur, meat, or even to sell them as exotic pets. The destruction of forests is also a big problem since the kinkajous are completely reliant on their arboreal habitat. Nearly 100,000 acres of rainforest are lost every day, and much of this is in the Americas.

What eats the kinkajou?

The kinkajou is primarily preyed upon by harpy eagles, the black-and-chestnut eagle, jaguars, boas, and humans. Most predation probably occurs during the day, when the kinkajou is sleeping. But the arboreal habitat affords a great deal of protection against nearly all predators except for those that can climb or fly.

The kinkajou is considered to be a polygamous species. Although there is generally just a single female per group, the dominant male can also choose to mate with any periphery females near his territory that doesn’t belong to a particular social group. The subordinate male has no guaranteed mating rights, but sometimes he may be allowed to copulate with the one female of the group. The kinkajou can breed all year round, but the peak breeding season seems to vary with geographical range, perhaps based on the availability of local fruit.

After a long gestation period of up to 120 days, the female gives birth to one (and rarely two) helpless young at a time in a tree hollow. As the main caregiver, she bears sole responsibility for the baby’s parental care. The father may sometimes interact with the young baby but rarely provides for its needs. The mother will continue to wean the baby for another eight weeks after birth. She must feed a lot during this time due to the extra-long gestation and weaning periods.

If it survives the juvenile period, the kinkajou will achieve full sexual maturity after about 18 to 20 months. It’s not quite known how long the kinkajou can survive in the wild, but the typical lifespan in captivity is about 20 years, and the longest living kinkajou ever recorded had a lifespan of about 40 years.

The kinkajou is considered to be a species of least concern by the IUCN Red List. It’s difficult to arrive at a proper population estimate, because kinkajous like to hide in trees. Numbers appear to be decreasing from habitat loss and overhunting (which is exacerbated further by the low reproduction rate of this species), but the decline isn’t yet serious enough to affect the kinkajou’s conservation status.

Kinkajous in the Zoo

One of the most popular destinations for kinkajous in the United States is the San Diego Zoo. The kinkajou first arrived there in the 1920s. Since then, it has served as an animal ambassador to greet guests at both the main zoo and the safari park. The kinkajou can also be found at the Maryland Zoo, Oregon Zoo, Peoria Zoo, Zoo Boise, Utah’s Hogle Zoo, and the Alexandria Zoo in Louisiana.

Kinkajou as a Pet

The kinkajou may appear very cute and affectionate, but as a wild animal, it’s not recommended to keep this species in a domesticated setting. There are a few specific reasons for this. First, it would be very difficult to replicate the animal’s natural environment to its satisfaction. Its natural instinct is to climb on everything. Second, if it feels annoyed or threatened, the kinkajou does have the tendency to lash out with its sharp claws or teeth, which can do serious long-term damage. Third, most vets do not know how to treat kinkajous if a particular health problem arises. Even if none of these practical concerns was a factor, some states may have made it illegal to own an exotic undomesticated species from the Procyonidae family or the Carnivora order. If you want to get one, then you should check with your local laws first.

What is a kinkajou?

The kinkajou is a small omnivorous mammal with a prehensile tail, sharp claws, and scent glands.

How much money is a kinkajou?

Since it is not easy to obtain a kinkajou as a pet, these exotic animals can easily cost a few thousand dollars.

Is a kinkajou a monkey?

No, despite its appearance, the kinkajou is not a monkey at all. Whereas monkeys are types of primates, the kinkajou is actually more closely related to raccoons. The name for this phenomenon, in which two different groups evolve similar features to cope with the same environment, is convergent evolution. In this case, both kinkajous and monkeys have both evolved prehensile tails to live in the upper canopies of tropical forests.

The kinkajou is usually quite docile and easy-going around people. If it’s disturbed or agitated at all, however, then it can lash out and cause some serious damage.

Where do kinkajous live?

The kinkajou inhabits the rainforests, evergreen forests, and even some dry forests of Central and South America.