Written by Cindy Rasmussen
Published: April 30, 2022
© Thorsten Spoerlein/Shutterstock.com
Share this post on:
More Great Content:
Bili Apes: The Largest Chimpanzee Ever?
Chimpanzee vs Gorilla: What’s the Difference?
Chimpanzee Teeth: Everything You Need to Know
What Do Chimpanzees Eat? 20+ Foods in…
Chimpanzee Lifespan: How Long Do They Live?
Watch A Group of Chimps Play Frisbee…
↓ Continue Reading To See This Amazing Video

Chimpanzees are one of the “great apes” and are in the same family as gorillas, orangutans, bonobos, and humans! The famous conservationist Jane Goodall studied chimpanzees for decades, living alongside them in Tanzania. They are considered the most intelligent animals alive and can solve problems, use tools, and have a complex communication system. Photos of baby chimpanzees can be really cute. But what about stories of chimpanzees going on wild rampages? Do chimpanzees hunt and kill monkeys? Do they kill other chimps? Are chimpanzees dangerous to people? Have they ever attacked a human? Let’s find out about these human-like animals.

Chimpanzees are apes with human-like features. They have two arms, two legs, no tail, ears on the side of their heads, and are similar in size, you can see the resemblance. On the other hand, their bodies are covered in dark brown to black fur, they get around on all fours, using their feet and knuckles, but they don’t use social media (not yet, at least). Chimpanzees have a complex communication system and a social structure of hierarchy, with most chimps living in groups where they play together, hunt together and take care of each other. You may think chimpanzees are smaller than they actually are. An adult male can be the same size as an adult human. Males can be 5 feet 6 inches tall and weigh 150lbs., while females are a bit smaller.

Yes, chimpanzees can be dangerous. Chimpanzees will hunt in groups in the wild to kill and eat monkeys. This may sound dangerous, but they are wild animals. Many other animals hunt in groups to kill prey, especially carnivores that rely on meat to live. Lions, wolves, and hyenas all hunt in packs and kill and eat their prey. Chimpanzees can also be dangerous to humans, especially if they feel threatened or are protecting their young.

Chimpanzees can attack people, but they typically will avoid humans. Wild chimpanzees and chimpanzees raised as pets have been documented attacking humans. There are more instances of pet chimpanzees attacking than wild ones, but there are cases of both.

Have chimpanzees ever killed anyone?

Wild chimpanzees have killed people in rural areas where humans and chimpanzees coexist. There are 20 documented cases of human death in the Western region of Uganda in the past 20+ years. Other cases in the Democratic Republic of Congo have been reported as well.

Yes. Scientists are studying why chimpanzees would attack and kill their own. There have been cases where groups have tried to defend their own territory from other groups of chimps. One instance caught on video showed what happened after a group of younger male chimps killed their former leader. In Senegal, a group of researchers had been studying chimpanzees and found that the leader of the group had been overthrown and was living on his own for years, but when he attempted to rejoin the group in 2013, he was attacked and killed.

Do chimpanzees attack other animals?

Chimpanzees attack and kill smaller monkeys for food, but an incident at the Loango National Park in Gabon was shocking. In July of 2021, researchers witnessed the first instance of chimpanzees attacking gorillas. They typically live in harmony in the same habitat, respecting each other’s space. There were two separate incidents where a group of chimpanzees attacked a smaller group of five gorillas. Each fight lasted around an hour and in the end, two infant gorillas were killed. Researchers wondered if competition for food in that area had caused the attacks.

Do chimpanzees have other diseases?

Yes, chimpanzees carry some of the same diseases that are common in humans. A recent study found a new disease in chimpanzees in Sierra Leone that is almost always fatal. This is concerning because scientist Tony Goldberg reported, “There are very few pathogens that infect chimpanzees without infecting humans and very few pathogens that infect humans without infecting chimpanzees.” This research just came out in February of 2021, so there is much more work needed to be done to prevent the spread of this and other diseases.

Did Jane Goodall say that Chimpanzees are dangerous?

Jane Goodall has witnessed the wild nature of chimpanzees and was asked to give her opinion after Travis the chimp attacked Charla Nash. According to the L.A. Times, Goodall said this incident “should serve as a potent reminder that chimps – no matter how human they may seem – are not cut out to be pets.” She reminded people that as chimpanzees reach the age of 6-8 years, they can get very strong and that “chimpanzees evolved in the tropical forests of Africa, and that’s where they’re suited to live, roaming in groups of their own kind.” Chimpanzees can be dangerous to humans and humans can be dangerous to chimpanzees, so we need to continue to find better ways to coexist. 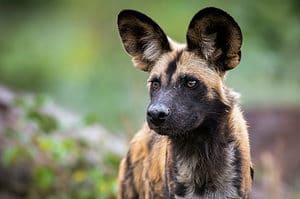 Chimpanzee Teeth: Everything You Need to Know