The Dorgi is one of the more popular mixed breed dogs.

Dorgi as a Pet:

Click through all of our Dorgi images in the gallery. 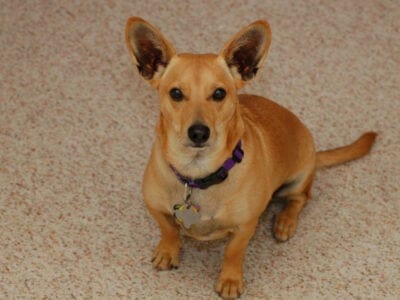 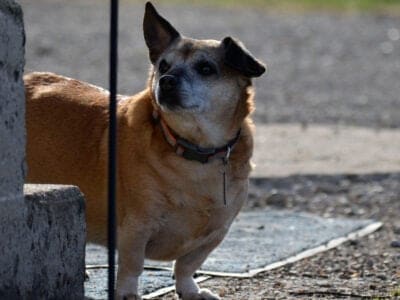 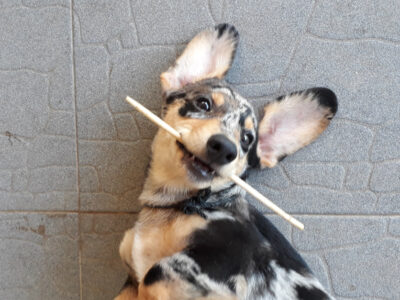 View all of the Dorgi images!

Intelligent, hard-working, but very playful and goofy, the Dorgi is a cross between a Dachshund and a Pembroke Welsh Corgi. Like many mixed breed dogs, the history of this one is a bit hazy, but it actually comes from two very illustrious and old heritages. The Corgi is a short-legged herding breed from Wales, perhaps dating back to around 1100 AD. The Dachshund is a small but very long hound and hunting dog from Germany that also dates back many centuries.

Despite a common belief, Queen Elizabeth II did not start this mix, but she did play a big role in popularizing it. Her two Dorgis, Vulcan and Candy, are famous around the world. This mix combines many physical and behavioral traits from both breeds. It is usually characterized by short legs and a long body. The ears can be erect like the Corgi or drooping like the Dachshund. The coat can also vary in length and consistency, but it’s normally dense and medium-length. Brown, chocolate, black, red, and white are the most common colors. In terms of its temperament, owners should expect a loyal, friendly, energetic, and driven companion.

3 pros and cons of owning a Dorgi

The Dorgi is a small breed with a very short stature. Because there are no breed standards, the size can vary a bit.

While a generally healthy dog with a lifespan of 12 to 15 years, the Dorgi may suffer from the same inheritable conditions as its parents, including cataracts, a vertebral disc disease, and patellar luxation (essentially, a loose kneecap). Cancer is also a leading cause of death in this type of dog. Proper breeding will play an important role in its health. Before purchase, talk with your breeder to make sure a proper health evaluation has been done. Regular appointments at the vet are also necessary to catch potential health problems as soon as possible. In summation, these are the most common health problems with the Dorgi:

The Dorgi is an intelligent, loyal, sociable, playful, and affectionate breed with a big personality that belies its small stature. Because of the herding and hunting ancestry, it’s also a very task-oriented and purpose-driven dog that wants to be involved in all of your family activities. If you neglect its desire for mental and physical stimulation, then you may come home to a bit of a mess. Keep it occupied with plenty of games, toys, activities, and socialization to prevent unwanted behavior.

How to Take Care of the Dorgi

The Dorgi is an immense responsibility to care for. Owners should expect to set aside quite a bit of time for its grooming, its exercise needs, and (at least early on) its training. As long as it receives enough exercise, however, it should do okay with smaller living arrangements, including apartments.

Health and Entertainment for your Dorgi

This mix will need a few cups of high-quality dog food, consistent with its size and activity level. It might be a good idea to talk with your vet about formulating a suitable dietary plan based on the dog’s particular needs. Because this mix might have a tendency to become obese, you should watch its calories and limit treats.

Most Dorgis don’t actually shed that often. Regular brushing a few times a week should be sufficient to remove loose hairs and keep the coat clean. Some Dorgis with thicker coats, however, may shed a bit more and require almost daily brushing. Other aspects of its care are important to maintain as well. Owners will need to check the ears often for signs of infections or obstructions. Trims the nails regularly, perhaps once a month, to prevent them from cracking or splitting; this can cause your dog discomfort and pain. Finally, you should set up an oral health routine with the help of your vet to prevent gum and teeth disease.

Sociable, driven, and intelligent, the Dorgi should be fairly easy to train and responsive to human commands. However, this mix also has a bit of a stubborn side that may sometimes assert itself. Owners will need to be patient but firm throughout the entire training process. Positive reinforcement methods, combined with structured and consistent training, should work well to motivate your dog.

This mix may need around an hour of exercise per day. Long walks are a good idea, but you should mix it up with fetching, sports activities, and plenty of running. This breed should excel at some agility and herding challenges as well. Because of its herding and hunting ancestry, this dog has a high wanderlust potential. Be careful about letting it off the leash. If you have a fenced yard, then you should be able to let the dog roam around without any problems.

While naturally friendly and sociable, this puppy will still benefit from early socialization and training. Owners should focus on teaching the puppy to avoid nipping and herding people as much as possible. Classes can help quite a bit to provide a structure for owners to follow, as well as plenty of professional assistance. Crate training is also recommended at home to help with behavioral and housebreaking problems. If you have any questions about vaccinations, spaying or neutering, and micro-chipping, then you should talk with your vet.

The Dorgi and Children

The Dorgi is a friendly and lovable companion for the entire family, but you should make sure your children understand the proper etiquette for handling a smaller dog. This mix can get a little annoyed and feisty if it’s handled improperly. Likewise, the dog needs to be trained to accept children. Depending on how much Corgi behavior it has inherited, the dog can start to nip at heels and herd people. While this shouldn’t be mistaken for aggressive behavior, it might disturb younger children. It should be discouraged early on.

Dogs Similar to the Dorgi

Apart from its two parent breeds, the Dorgi shares strong similarities to the following breeds:

Many mixed breed dogs don’t have a popular following, but the Dorgi is an exception. It has a very well-known patron; Queen Elizabeth and her sister Margaret have both owned several of these dogs. Vulcan and Candy appeared with the queen in 2016 on the cover of “Vanity Fair” to celebrate her 90th birthday. Vulcan died in December of 2020, leaving Candy as her sole remaining dog. The queen supposedly stopped breeding Corgis in 2015 because she did not want to leave any dogs behind after her death.

Popular Names for the Dorgi

If you’re struggling to come up with a suitable name for your Dorgi, then you might want to consider a few suggestions:

View all 42 animals that start with D

How big is a Dorgi?

The Dorgi normally weighs between 15 and 28 pounds.

What's the difference between a Corgi and a Dorgi?

That depends on what traits it inherits from the parents. Some dogs may be slightly more like a Corgi, whereas others may be more like a Dachshund. But in general, these mixes tend to have a longer body, a thinner coat sometimes covered in black, and a stronger prey drive compared to the Corgi. The ears will also sometimes be drooping.

Does a Dorgi bark a lot?

The Dorgi does like to vocalize a bit to express itself and alert its owner to any disturbances. Fortunately, it will only tend to bark when it’s particularly exciting.

How much does a Dorgi cost?

The price of a new puppy will depend on many factors, including the quality of the breeder and the pedigree of the dog, but on average you can expect to pay around $650. If you are unable to afford this price, then you might want to consider adoption as an alternative. Because of its rarity, it’s unlikely that you will find this mix randomly for adoption in a local animal shelter, but it might be worth looking at Corgi or Dachshund-specific organizations that also take in mixes. The price of adoption is usually a few hundred dollars.

What breeds make a Dorgi?

This mix is bred from a Corgi (a herding dog) and a Dachshund (a hunting dog).

How fast can a Dorgi run?

That depends on what traits it inherits from its parents, but both breeds are quite fast. The Corgi can run up to 25 miles per hour.

Who invented the Dorgi?

No one really invented the Dorgi; these two dogs have probably reproduced just fine without any human intervention over the centuries. However, more recently, people have started to intentionally breed these dogs with more frequency. Most Dorgis are probably first-generation crosses produced directly from the parent breeds.

The Dorgi is a small dog with a fairly long body and short legs. The ears can be erect or drooping. The coat can also vary between smooth and long, even sometimes slightly wiry.

How long is a Dorgi?

Because of its Dachshund heritage, it can reach up to 2 feet long.