Has an elegant white moustache! 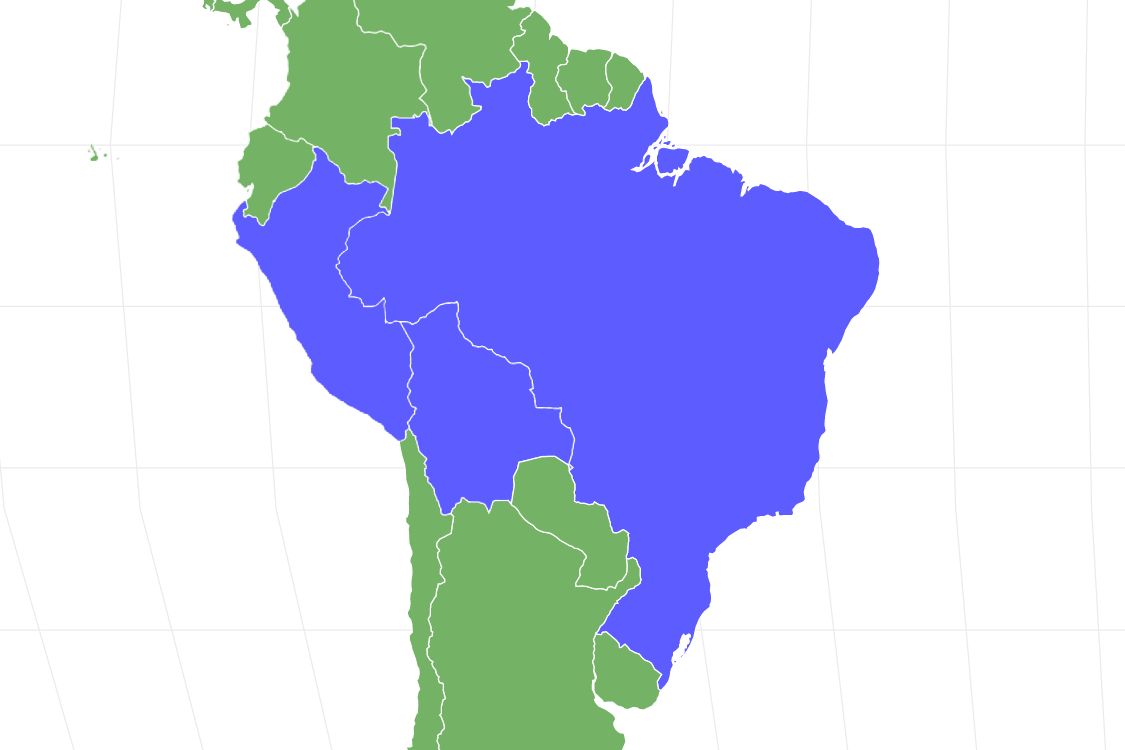 View all of our Emperor Tamarin pictures in the gallery.

View all of the Emperor Tamarin images!

“The emperor tamarin is a species of tamarin allegedly named for its resemblance to the German emperor Wilhelm II.”

With a graceful white mustache resembling German emperor Wilhelm II, the emperor tamarin belongs to a species of small monkeys and is mostly found in the forests of South America. Its name was first mentioned in jest before it was incorporated in connection with the mammal. It is highly identified by its small body size and long, thin tail, and its grey coloring is accented with bits of red and orange on its back and chest. It shares its genus with at least 11 other species.

An emperor tamarin goes by the scientific name Saguinus Imperator and belongs to the Callitrichidae family. “Saguinus” comes from the Portuguese word “sagui” (which is Tupian for “marmoset”) and the Latin suffix -inus (“of”), while “Imperator” is Latin for the word emperor. It further belongs to the class Mammalia and genus Saguinus – from where it also gets its scientific name.

At just 9 to 10 inches tall, the emperor tamarin is a rather small animal that weighs about 1 pound. It is covered in grey fur with a bit of red and yellow on the back and the chest. It has black hands and feet and a long, brown tail. With a pink nose and mouth, what uniquely distinguishes this creature from others is its elegant white mustache, and oftentimes a beard to match.

These primates are diurnal, meaning they are most active in the daytime, and relaxing and sleeping through the night. Their small size and lightweight structure allow them to be able to hop from one tree branch to another, making it easier for them to be able to reach food that is usually inaccessible to other animals. Moreover, their sharp claws help strengthen their grip around tree branches, making it easier for them to stay put and in better positions than most other animals.

Emperor tamarins are known to be very sociable creatures and live with the rest of their troops in a marked territory. A troop, or group, can range anywhere between 4 to 20 tamarins. Such groups are usually led by the eldest female members and also have predominantly male members. It has also been observed that these tiny species are very loving and affectionate towards the humans they come in contact with. They maintain a close-knit relationship with all the members of their group and cordially cooperate. They are also known to sleep, feed, collect for, and protect their marked territory together.

Some sources suggest that the emperor tamarins may live in groups of mixed species with other tamarins, mostly the saddleback tamarin. It is said that such coexistence often becomes a mutually beneficial relationship that helps both the species protect themselves and one another from any likely predators.

These tamarins are known to have a dichromatic vision, meaning that their vision only allows them to see in two differentiating colors. This is a part of their adaptation scheme to be able to identify any possible threats and predators even when they are camouflaged in the surroundings.

The bearded emperor tamarin is usually found in the rainforests of Brazil and Peru, while the black-chinned emperor tamarin is known to be scattered across the rainforests of Brazil, Peru, and Bolivia. Lowland tropical rainforests, which these species are known to prefer, are often the ideal habitat. They are usually found living in the tree canopies of the river basins. However, lowlands are far from the only habitats that they are found in. Others include forests that are flooded during rainy seasons, rainforests that grow on flatlands, evergreen forests at altitudes below 984 feet, along the edge of remnant forests, and in broadleaf forests.
Meanwhile, it has also been observed that emperor tamarins usually don’t live in high trees and are usually not found above 80 to 90 feet off the ground.

Sources suggest that there are more than 500 emperor tamarins in zoos all around the world. However, it has also been said that their population has been on a steady decline primarily due to humans looking to clear land for residential and/or industrial purposes.

Emperor tamarins are omnivorous, meaning they eat both plants and animals to survive. Fruits, eggs, nectar, and insects are some of the things that primarily make up their diet and primarily come from the trees they reside in.

The size of these species facilitates them to look for food easily. Since they are so small and light, they can easily hop over tree branches and reach the usually inaccessible food. Surprisingly, the species can travel 30 hectares (0.12 square miles) as they seek out food sources for sustenance.

Due to its small size, the emperor tamarin is met with a lot of predators. Wild cats, birds, dogs, snakes, and humans, among others, together make up the predator list for the animal.

Threats to the wellbeing of emperor tamarin come from a vast variety of animals including wild cats, dogs, snakes, and even humans, who have been known to destroy the natural habitat of the species over the years. Its predators, however, find it difficult to prey on the emperor tamarin due to its ability to pass through the thickest jungles very quickly.

According to the International Union for Conservation of Nature, the conservation status of the emperor tamarin is of least concern. However, reports suggest that their population has been on a steady decline mostly because of deforestation and encroachment by humans looking to clear land for other purposes.

Emperor Tamarins are known to be seasonal breeders and usually bear offspring during rainy months. This may be due to the abundance of food during that season. The family groups involve one breeding female and two breeding males. Tamarins are polyandrous in their mating habits, allowing the female to mate with multiple breeding males within their group.

After conception, the gestation period is known to last for about 140 to 145 days. After this period comes to an end, the female often produces two offspring. However, one or even three offspring are also typical. Other adults in the tamarin group spring to action as soon as the baby is born. The mother is known to feed its child in intervals of two to three hours, lasting for approximately 30 minutes per session. Similarly, the fathers also take responsibility for the child and carry them on their backs and take care of them once they have been fed. It is said that the babies travel on the backs of their fathers for around 6 to 7 weeks. Baby emperor tamarin mature rather quickly, attaining sexual maturity between 16 to 20 months of age. Emperor tamarins go on to live for 10 to 20 years.

The emperor tamarin can be found in several zoos throughout the world, including:

Can you have an emperor tamarin as a pet?

There is no restriction on keeping emperor tamarin as pets. However, it is much like keeping an otherwise social animal in an unnatural habitat. It, therefore, becomes possible that these tamarins are unable to thrive and cooperate as they normally would in ideal conditions.

Why do emperor tamarins have mustaches?

The mustache of an emperor tamarin is believed to be used as a way to identify different members of the species.

How do emperor tamarins reproduce?

A female emperor tamarin is polyandrous, mating with multiple males. Up to three offspring isn’t uncommon, and they often give birth during the rainier seasons of the year.

What are emperor tamarins predators?

The petite size of the emperor tamarin puts it at risk as prey for many animals, including birds, snakes, wild cats, and dogs. Humans are also considered to be a predator for the emperor tamarin, due to the destruction of their natural habitat for land and resources.

Why is the emperor tamarin important?

Sources suggest that emperor tamarins are extremely important for the ecosystem. They keep the food chain going as they serve as essential food for snakes, pumas, and other predators.

Emperor tamarins are omnivores. Their diet primarily consists of fruit, but they also enjoy insects, leaves, and nectar. While in captivity, these animals will also consume hard-boiled eggs, according to the Smithsonian National Zoo.

When was the emperor tamarin discovered?

Sources suggest that the emperor tamarin was only discovered as recently as 1907.

What Kingdom do Emperor Tamarins belong to?

What phylum to Emperor Tamarins belong to?

What family do Emperor Tamarins belong to?

What order do Emperor Tamarins belong to?

What genus do Emperor Tamarins belong to?

What type of covering do Emperor Tamarins have?

Emperor Tamarins are covered in Fur.

In what type of habitat do Emperor Tamarins live?

What is the main prey for Emperor Tamarins?

What are some distinguishing features of Emperor Tamarins?

How many babies do Emperor Tamarins have?

The average number of babies an Emperor Tamarin has is 2.

What is an interesting fact about Emperor Tamarins?

What is the scientific name for the Emperor Tamarin?

The scientific name for the Emperor Tamarin is Saguinus Imperator.

What is the lifespan of an Emperor Tamarin?

Emperor Tamarins can live for 8 to 15 years.

How fast is an Emperor Tamarin?

An Emperor Tamarin can travel at speeds of up to 24 miles per hour.