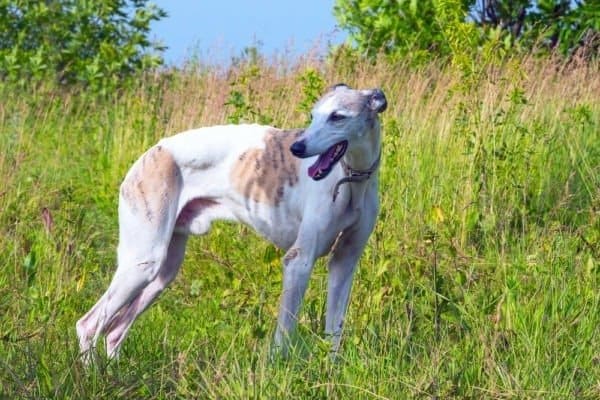 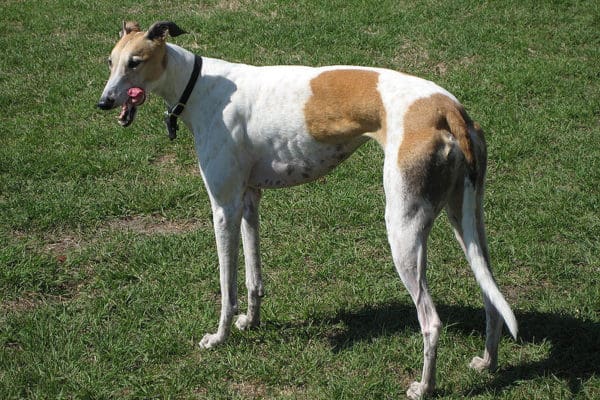 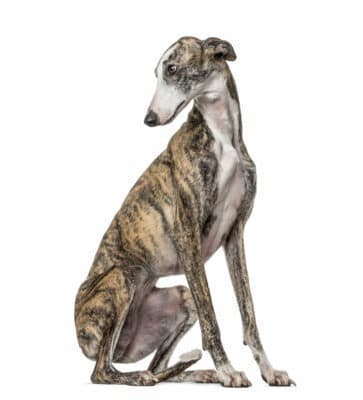 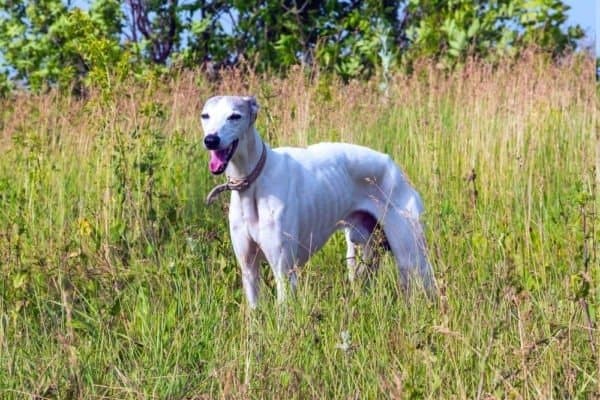 This post about the greyhound may contain affiliate links to our partners. Purchasing through these helps us further the A-Z Animals mission to help us educate about the world’s species so we can all better care for them.

The greyhound has the highest percentage of fast-twitch muscle of any breed. In spite of this reputation, retired racing greyhounds make for calm and sweet pets. It is also called the English greyhound to avoid confusion with the Italian greyhound. The breed is a hunting type and a sighthound whose ancient remains were discovered in modern Syria and dated 4,000 years ago. Originally, however, it was used for hunting desert wildlife by the Egyptian pharaohs 5,000 years ago. It has a history in coursing of deer, foxes and hare, and racing and companionship in England, Great Britain and the British Isles. Since its breed registration in 1885 by the American Kennel Club, it has enjoyed a following as a friendly, noble sporting show dog and pet.

3 pros and cons of owning Greyounds

This dog is tall, slim, graceful and a smooth-coated large dog with powerful, long legs under a deep chest, flexible spine and slender build. They have a height of 28-30 inches for males and 27-28 inches for females. Males weigh 60-88 lbs and females weigh 55-75 lbs. They both weigh on average about 70 lbs. Most greyhounds in family homes today are adopted as adult racing dogs. They are considered adults at 18 months.

Greyhounds tend to be healthy and to live long lives of 10-14 years. However, there have been some cases of greyhounds developing esophageal achalasia, gastric dilatation volvulus (also called bloat), gastric torsion, heart and eye conditions, osteosarcoma, and corns on the paw pads. There is also a condition called greyhound neuropathy. They can develop Alabama rot if exposed to E. coli. If they are on hard surfaces, they develop skin sores. Flea collars, flea spray and other insecticides are not safe to use on them. If they are outside, they will have more health issues from exposure to extreme heat or cold, though they tolerate heat better than cold. Some racing greyhounds develop an arched back — while they run, they extend their long legs and stretch their spines for a better stride to cover more ground in less time. An arched back makes it impossible for them to do so, although some dogs can run very fast. Recommended health tests for the breed are an ophthalmologist evaluation, a greyhound polyneuropathy NDRG1 DNA test, and a cardiac exam. In sum, common health issues with Greyhounds are:

Greyhounds are docile, quiet, gentle and loving pets. They each have their own personality, with different traits and behavior depending on whether they were purely show or working dogs. Although many adopted greyhounds are retired racing dogs, they adjust very well as adults to their new homes. They don’t tend to bark or howl, but they are mistrustful of strangers. When they are not sprinting outside, they are couch potatoes at home, mostly relaxing or sleeping for 18 hours a day. It is difficult for them to be left alone for several hours, as they need a lot of attention and care. They enjoy being around people and other pets.

As puppies, they are more demanding than as adults, with a need for playtime of 1 to 2 hours a day. They need chew toys to learn not to mouth on people.

How To Take Care of Greyhounds

The most important decision in adopting a greyhound is whether it should be a puppy or an adult, because they are different in their needs and behavior. From this, new pet owners can learn about how to care for greyhounds at various ages. The breed also has unique health factors that must be considered.

Greyhounds demand a diet higher in fat, calories and protein than some other dogs. They need a high-quality dog food for their age:
Puppies enjoy puppy kibble and pureed meat. To meet the dietary needs of adults, feed them a mixture of dry food and chopped meat. They need 250-300g of meat a day, plus vegetables or fruit. Like other pets, you should research what human foods are safe for them to eat. Some examples of greyhound-safe fruit are bananas, apples, oranges, and watermelons. Vegetables they can eat are carrots, green beans, zucchini, cucumber, and cooked potato. They can also eat rice and pasta.

The best insurance for your greyhound is a plan that allows them to see any vet, emergency clinic or specialist in the country. It should have unlimited or no restrictions on coverage. Keep in mind that some insurance companies have exclusions for performance dogs.

This breed’s short coat goes through light seasonal shedding. It needs no more than a monthly bath and weekly rubdown with a damp cloth or grooming glove. Nails should be trimmed and ears cleaned regularly. You should brush their teeth every day with a special toothpaste formulated for dogs.

Greyhounds are playful and have a lot of wanderlust, but they are very smart and easy to train as adults. As puppies, they are more difficult to train since they have difficulty with recall. Like other sighthounds, they have a very strong prey drive and therefore tend to give chase, being able to see far ahead. When you practice letting them go off lead in a safe area, they will remember to come back. It becomes easier as they get older.

Greyhounds enjoy sprinting, with an average high speed of 45 mph. Part of their exercise is mental stimulation, so they could enjoy games or hidden treats. Other than a daily walk, they need an additional 30-40 minutes of exercise each day. They do well living in apartments if they get to be walked. If there is no yard, they will require more frequent walking. To burst off excess energy, greyhounds sprint in the backyard or through the house. Walk them in the early morning and evening to avoid sunburn, and wait an hour after feeding them before playing to avoid bloat or torsion.

Puppies are born in litters of 1-12. Like most breeds, during puppyhood greyhounds express mouthiness and the tendency to chew on, nip or play-bite. Mouthy dogs tend to use their mouths to hold or “herd” humans, so they need to learn to redirect it to chew toys. Greyhounds, like other mouthy breeds, love to play fetch, and they also enjoy chewing on stimulating and rewarding toys stuffed with kibble or treats. This breed needs a lot of attention and training during puppyhood.

Greyhounds need to be socialized from a young age with other animals and children. Although very people-oriented, the breed prefers quiet and soft-spoken families rather than a family that has very young children. Their skin tears easily, making it difficult for them to be around rowdy toddlers. They are independent while playing, being more self-motivated than other hunting breeds that require direction.

Other dog breeds similar to the greyhound are the Russian Borzoi, the Persian greyhound and the whippet.

The most popular names for greyhounds refer to their speed. For either sex, the top five names are:

Top choices for males are:

Those for females are:

How fast can a greyhound run?

A greyhound can reach an average race speed that exceeds 40mph and a full speed of 43mph in 98 feet. It can travel at about 68feet/second  for the first 820 feet of a race.

Yes, they are excellent with adults, children, and even other pets.

Outside of their exercise periods, greyhounds are known for being “45mph couch potatoes.” They are not high-energy dogs. Like most other dogs, they get periods of running called “the zoomies,” except greyhounds sprint. They prefer doing activities with humans, instead of for their humans.

Yes, they are very intelligent. They are curious, playful, and sneaky pets.

Yes, they are good first dogs because they are so gentle and easygoing. they are not aggressive with people, other animals or other dogs.

What's the difference between a greyhound and a whippet?

A whippet is basically a small greyhound descendant. It is famous for being the most friendly of all the sighthounds and are known for being great family dogs and getting along well with other dogs or cats. Whippets are good for people who want a greyhound but don’t have the space for the larger dog.

How much does a Greyhound cost to own?

If you are getting a well-bred greyhound puppy, you can spend anywhere between $2,500-$15,000. On the other hand, if you adopt an adult, the price will be the standard adult dog adoption rate. Caring for a greyhound can cost $800-$1,000 a year.

How long do Greyhounds live?

Where does the name greyhound come from?

The scientific name of the domestic dog species is Canis lupus familiaris and includes any greyhound breed. The word “greyhound” does not have anything to do with the scientific name, but is thought to come from the Old English word grighund.