The horn shark has a tough exterior and sharp spines to protect itself. Click through all of our Horn Shark images in the gallery. 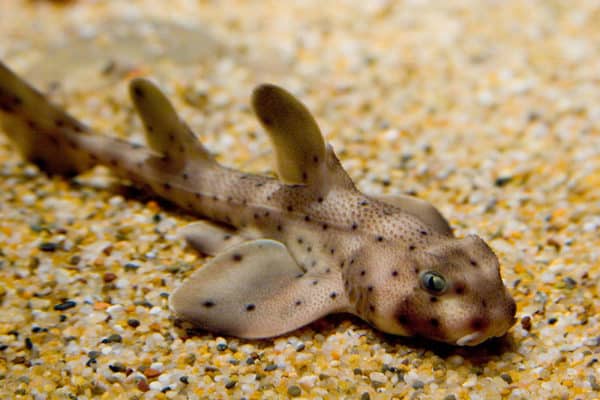 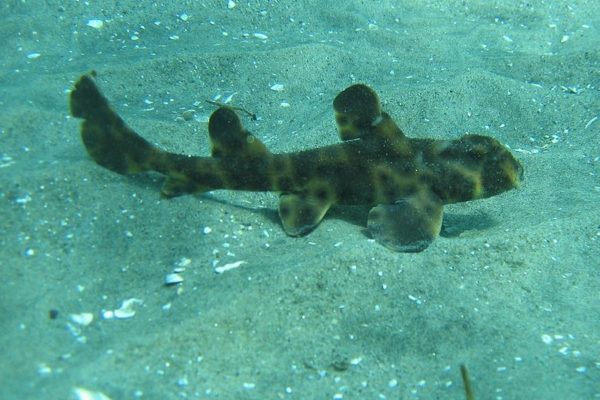 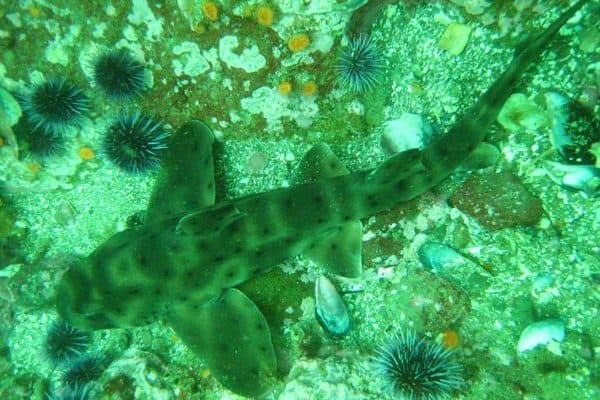 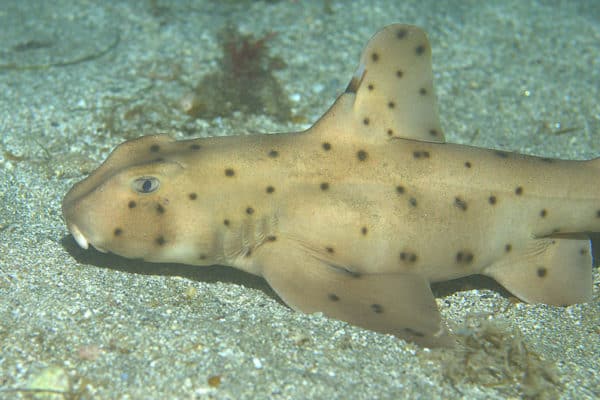 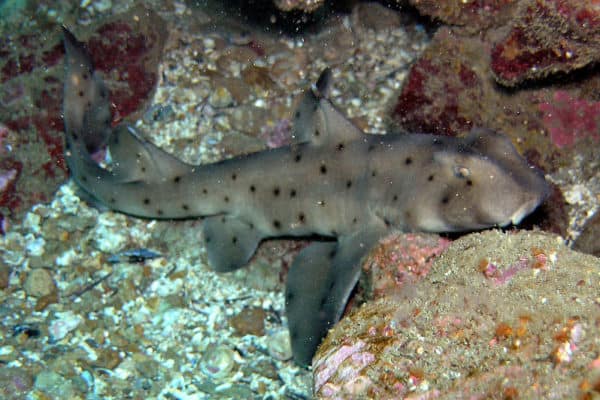 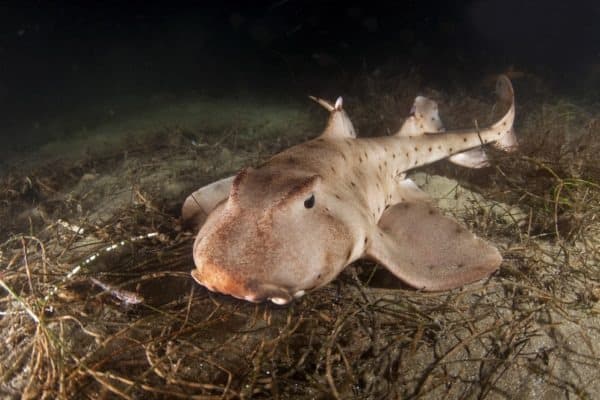 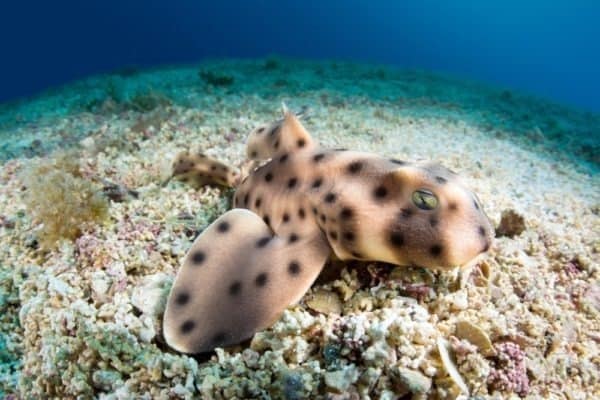 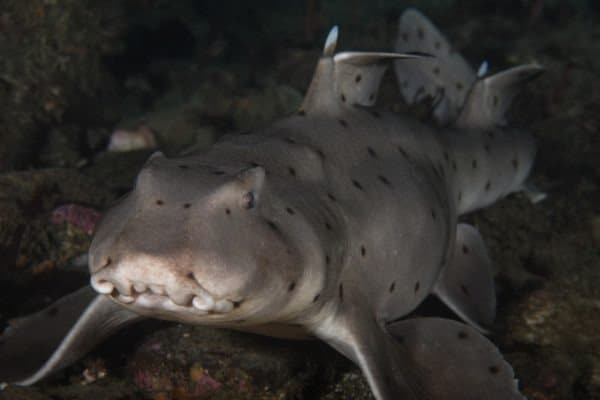 View all of the Horn Shark images!

The horn shark is a slow-moving and lethargic species that spends most of the day camouflaged among the rocks and only comes out at night to feed.

But don’t mistake this lethargy for indolence. Once it spots a predator or prey, the horn shark is ready to move at fast speeds in an instant. This species is mostly ignored by humans because it has little value to recreational and commercial fishers. Only scientists take much interest in the horn shark because of its ability to survive in captivity.

The scientific name of these sharks is Heterodontus francisci. The genus name Heterodontus derives from a combination of two Greek words: heteros, meaning different or other, and odous, meaning teeth. This is perhaps a reference to their molar-like arrangement of teeth in the mouth. The species name francisci is a Latinized form of San Francisco. The horn shark is closely related to the small bullhead sharks (not to be confused with the larger bull sharks). There are nine living species in this genus, including the crested bullhead shark and the Port Jackson shark. These bullhead sharks are the only species in the family of Heterodontidae (and the entire order of Heterodontiformes).

These sharks are easy to identify from its blunt head, curved snout, long mouth, and sharp spines. The most distinctive physical characteristic of the horn shark is the prominent ridges above both eyes that kind of resemble horns. They also have a brown or gray back with white spots and a yellowish underside to provide camouflage amid the dirt and rocks. The horn shark measures up to 4 feet in length, but the typical size is 3 feet long and 20 pounds, or about the same size as a small domesticated dog. Both males and females tend to grow around the same size as each other and have a similar appearance.

These sharks have a narrow range along the coasts of California and Mexico. Reports indicate that it may appear as far south as Ecuador and Peru, but it’s unclear if these specimens are actually a similar species identified as a horn shark by mistake. Horn sharks dwell among kelp beds or rocky outcrops in shallow waters around 26 to 40 feet deep. They sometimes move out to deeper waters depending on the climate.

Not much is known about the number of horn sharks left in the wild. The IUCN Red List considers it to be data deficient, but the species appears to be fairly common throughout its natural habitat. They do not appear to be seriously threatened in any way, and no particular conservation efforts are devoted to it.

The horn shark is one of the top predators in its ecosystem but not an apex predator. This species drifts along the continental shelf at night, feeding on prey and running from danger.

What does the horn shark eat?

The horn shark diet consists mostly of hard-shelled crustaceans like shrimp and crabs, but they enjoy other food items as well. One of their most common hunting tactics is to surprise small fish that sleep at night. They also eat so much purple urchin that the teeth and body are sometimes stained purple. The horn shark moves along the bottom of the sea bed, sucking up prey into its mouth. The shark has small molar-like teeth which it uses to crush the hard shells of its prey.

What eats the horn shark?

A full-grown adult horn shark only has a few natural predators, among them other sharks. But elephant seals and eagles may also prey upon juveniles and eggs.

These sharks have an annual mating season in December or January. The male chases the female to indicate his interest. Once the female signals she is ready, the male grabs her pectoral fin with his teeth and mates with her. The mating session lasts 30 to 40 minutes before they depart permanently.

A few weeks later, the female will begin laying a litter of up to 24 eggs. She only lays two of her litter at a time, so it takes her a few months to fully produce them all. These eggs are encased in a spiral-shaped substance with the same color as the surrounding kelp so they can be safely deposited in crevices and kept hidden from predators. The horn shark is one of the few species of sharks to actually invest a great deal of time into parental care. The mother will even sometimes position the eggs herself.

The young litter of pups emerge from the eggs after some six to nine months, usually measuring no more than 7 inches in size. The sharp spines serve as the main means of protection against hungry predators like angel sharks and sea bass. The juveniles begin to feed on the yolk sac for the first month until they are old enough to hunt on their own. Then they graduate to soft-bodied prey such as worms and sea anemones. Only once their teeth and bodies are more developed do they finally begin to feed on hard-shelled creatures. Each individual shark grows at highly different rates, which makes it difficult to say anything consistent about their life stages. But these sharks are known to live some 12 years in captivity and possibly around 25 or even 50 years in the wild.

Horn Shark in Fishing and Cooking

This shark has almost no value to fishers except as a sport for the most dedicated of recreational fishers. The only real danger from humans is when it’s accidentally caught in shrimp trawls or gillnets. When the shark is caught deliberately, it is almost always for scientific purposes. This shark can survive at least 12 years in captivity while other sharks die from starvation because they stop eating. This makes it very valuable as a specimen for studying shark anatomy, ecology, and reproduction.

How big does a horn shark get?

The typical horn shark grows around 3 feet long (rarely as much as 4 feet) and weighs some 20 pounds.

The horn shark is completely harmless to humans because it has evolved to instinctively run away at the first sign of danger. Divers should nevertheless approach it with extreme caution, because if it feels threatened or harassed, then the shark may inflict a very painful bite.

Where do horn sharks live?

Horn sharks tend to reside on the continental shelf along the coasts of California and Mexico, including the Gulf of California. It is sometimes found as far north as San Francisco and almost as far south as Guadalajara. Unconfirmed reports also place it in South America.

How long do horn sharks live?

Based on observations from its life in captivity, the horn shark is known to have a life expectancy of at least 12 years. Unconfirmed reports suggest that it may have the ability to survive up to 25 or even 50 years.

What do horn sharks eat?

Crustaceans appear to be the favorite food of the adult horn shark. The rest of the diet consists of sea urchins, fish, and mollusks.

What Kingdom do Horn Sharks belong to?

What phylum do Horn Sharks belong to?

What class do Horn Sharks belong to?

What family do Horn Sharks belong to?

What order to Horn Sharks belong to?

What type of covering do Horn Sharks have?

What are some predators of Horn Sharks?

Predators of Horn Sharks include sharks, seals, and eagles.

What is the average litter size for a Horn Shark?

The average litter size for a Horn Shark is 20.

What is an interesting fact about Horn Sharks?

Horned Sharks are endemic to the Californian coast!

What is the scientific name for the Horn Shark?

The scientific name for the Horn Shark is Heterodontus francisci.

What is a distinguishing feature of the Horn Shark?

Horn Sharks have ridges along their eyes.

How many species of Horn Shark are there?

There is 1 species of Horn Shark.

What is a distinguishing feature of the Horn Shark?

Horn Sharks have ridges along their eyes.

How many species of Horn Shark are there?

There is 1 species of Horn Shark.

What is the biggest threat to the Horn Shark?

The biggest threat to Horn Sharks is accidental bycatch.

What is the optimal pH for a Horn Shark?

The optimal pH for a Horn Shark is between 7 and 8.

How many Horn Sharks are left in the world?

The population size of the Horned Shark is unknown.