Tiny rodent with a kangaroo-like jump! Click through all of our Jerboa images in the gallery. 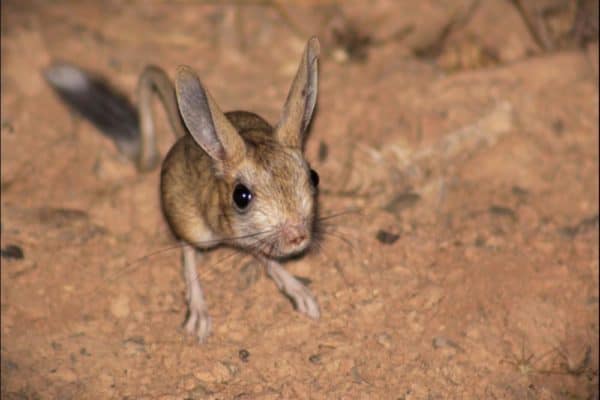 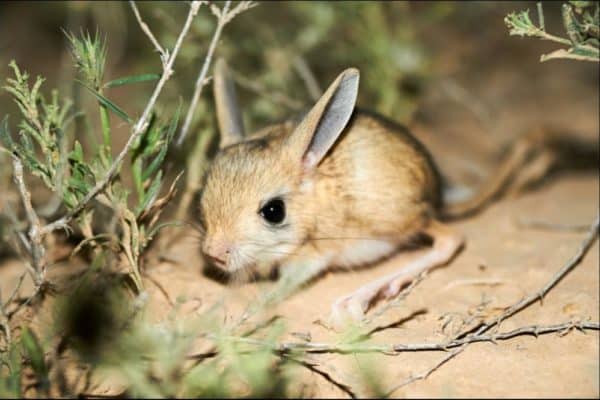 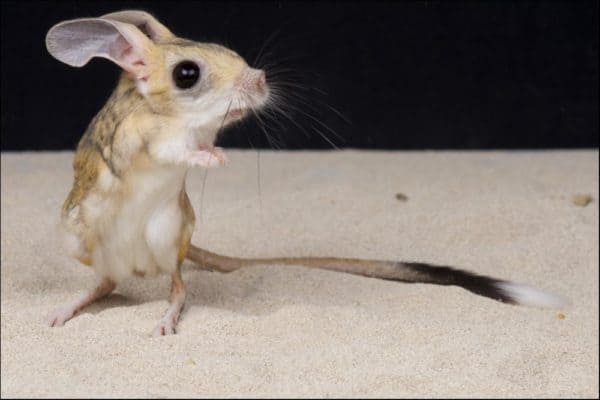 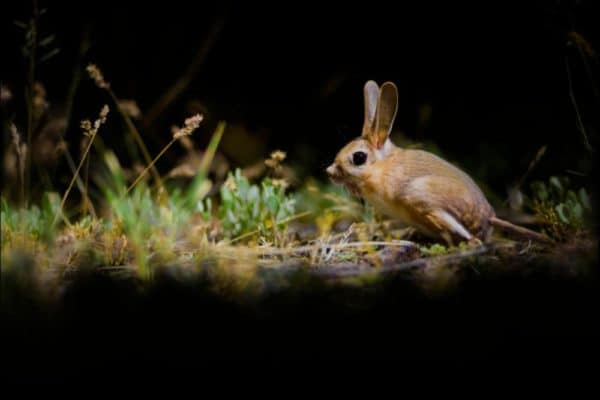 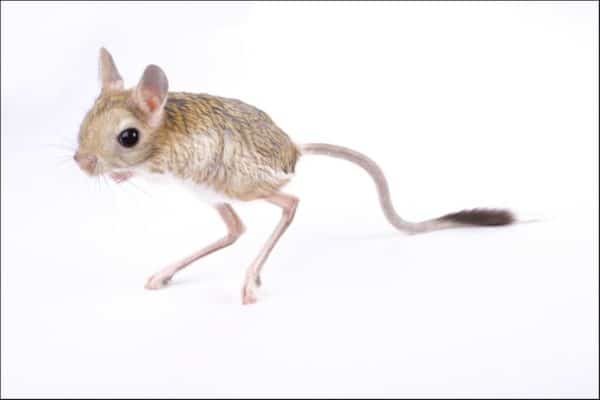 View all of the Jerboa images!

A jerboa’s tail is usually longer than its head and body combined. The jerboa is a small, hopping rodent that lives in the deserts of Northern Africa and Asia. Jerboas are incredibly cute animals and have very long ears, tails, and hind feet that give them an almost cartoonish appearance. They also have specially adapted legs that allow them to move about by jumping like a kangaroo.

The jerboa is part of the rodent family Dipodidae, which originates from the Greek words “di,” meaning “two,” and “podos,” meaning “foot.” This is because they have such small arms that it appears as though they only have their two hind feet. There are thought to be 33 different species of jerboa, including the iconic long-eared jerboa (Euchoreutes naso), thick-tailed pygmy jerboa (Salpingotus crassicauda), Mongolian three-towed jerboa (Stylodipus sungorus), and Greater Egyptian jerboa (Jaculus orientalis).

Jerboas are animals that have earned a reputation for being extremely cute as well as resilient. These tiny desert rodents have a distinctive appearance and thrive in the harsh, dry desert environments of Northern Africa and Asia. There are approximately 33 species of jerboas. They all share the same general features of a tiny, mouse-like head; large, owlish eyes; disproportionately long ears, and a long, powerful tail. They also have very short arms and long, cat-like whiskers that they use to navigate their environments. As its name suggests, the long-eared jerboa has even longer ears than other species of this rodent! Jerboas only grow to be two to six inches long, and their tails can be more than twice as long as their head and body combined. Both males and females share a similarly soft, sand-colored coat of fur that helps them blend into their desert surroundings, and both sexes only weigh about an ounce when fully grown – about the weight of a standard lightbulb. They are crepuscular, which means that they are most active in the twilight period of the day, but they are also active at night. Their enormous eyes and long whiskers help them to navigate the darkness easily. They are generally solitary and secretive creatures as well and usually live alone in burrows. Their shy nature has actually made it difficult for researchers to gather information on their habits and behaviors. 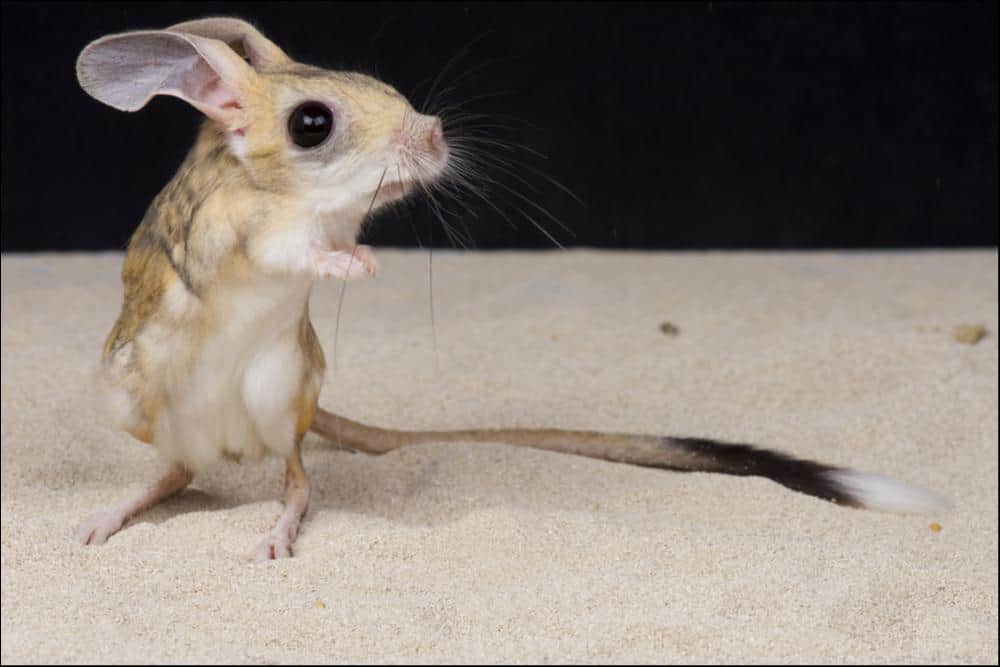 The jerboa can be found across Asia and down through Northern Africa. Jerboas prefer arid desert climates, and their bodies are well-designed to thrive in these hot and sandy habitats. They make burrows in the desert sands and spend most of the hot daylight hours sleeping in these cooler spaces. During the rainy season, jerboas will look for taller hills to burrow into in order to avoid flooding. One interesting fact about jerboas is that they have multiple burrows that they cycle through depending on the time of year. They will create two separate “permanent” burrows to serve as their summer and winter homes, but they will also create temporary burrows while they are out hunting as well. Jerboas hibernate in the winter, so their winter burrows are constructed to maximize warmth and safety. Permanent summer burrows are where jerboa pups are raised after the females give birth.

All jerboas are omnivores that live on a diet of plant matter and insects. Certain species may eat more insects than others, but this depends on the availability of food. They also derive all of the hydration that they need to survive from the food that they eat. Most jerboas will never actually drink water in their lives.

Jerboas are secretive creatures, which makes sense given their tiny size. Their main predators are foxes, cats, jackals, small owls, and snakes, but they are also threatened by loss of habitat due to human encroachment. Unfortunately, jerboas don’t have a good defense mechanism against predators and have to rely on hiding and jumping to escape danger.

Because of their shy and elusive natures, researchers do not know a great deal about the mating and parenting behaviors of jerboas. Once their winter hibernation period is over and they re-emerge, mating season begins. Jerboas are believed to be polygynous, which means that a single male will often mate with multiple females, but the females will only mate with one male. Researchers do not know this for sure, but many closely related species behave in this way, so it is likely. Females usually breed two times during the summer, and they have a gestation period that ranges from 25 to 35 days. This is considered long for a rodent species, particularly because they have such short lifespans. A typical litter consists of two to six pups, and the mother will care for her babies until they are weaned. When they are born, babies are naked and cannot care for themselves. They develop relatively slowly compared to other rodents as well. Jerboa cannot jump at all until they are 11 weeks old, and they do not reach sexual maturity until 14 weeks – twice as long as it takes for most rodents to mature. Jerboas can live up to six years in the wild.

Unfortunately, there is no data on exactly how many jerboas exist in the wild. Researchers have not found a way to get an accurate estimate of their numbers, but the International Union for the Conservation of Nature (IUCN) lists them as a species of least concern that is “widespread but distributed irregularly” due to habitat fragmentation.

What is a jerboa?

A jerboa is a small desert rodent that moves by hopping with its long hind feet. It has long ears, large back legs, and enormously round eyes that give it the appearance of a cartoon animal.

Why are jerboas banned in the United States?

Despite their cute and harmless appearance, jerboas have been banned in the United States for many years. This ban from the Centers for Disease Control extends to all African rodents due to the possibility of these animals carrying monkeypox, a disease similar to smallpox.

Is a jerboa deadly?

On its own, the jerboa is as adorable and non-threatening as it appears. They are not aggressive or venomous, but they are considered dangerous to humans. This is because they are likely carriers of monkeypox. The CDC has banned all African rodents, including jerboas and prairie dogs, from entering the country because of this deadly disease.

Do jerboas have arms?

Because they have such long and powerful feet, jerboas often appear to only have two legs. However, jerboas do have small, thin arms that are often kept close to their bodies.

Is a jerboa a mouse?

Although jerboas resemble mice and are a part of the rodent family, they differ genetically. This means that they are related to mice, but they are not considered mice.

How do you tame a jerboa?

Jerboas are not permitted as pets in the United States, but there are some breeders in Europe and Japan that raise them in captivity. However, this is not recommended or enjoyable for the animal. Jerboas are considered to be high-maintenance pets and require a considerable amount of time, patience, and care. By nature, jerboas are skittish and somewhat high-strung, but if they are bred in captivity they may become more relaxed. Wild-caught jerboas will likely remain shy for the remainder of their lives, but there have been cases where experienced keepers have been able to get a wild jerboa to become settled around humans.

Are jerboas carnivores, herbivores, or omnivores?

Jerboas are omnivores. They live primarily on plants, but they will eat insects like beetles and worms when they are available.View all 9 animals that start with J

Are Jerboas herbivores, carnivores, or omnivores?

Jerboas are Omnivores, meaning they eat both plants and other animals.

What Kingdom do Jerboas belong to?

Jerboas belong to the Kingdom Animalia.

What phylum do Jerboas belong to?

Jerboas belong to the phylum Chordata.

What class do Jerboas belong to?

Jerboas belong to the class Mammalia.

What family do Jerboas belong to?

Jerboas belong to the family Dipodidae.

What order do Jerboas belong to?

Jerboas belong to the order Rodentia.

Where do Jerboas live?

In what type of habitat do Jerboas live?

Jerboas live in deserts and steppes.

What are some predators of Jerboas?

Predators of Jerboas include owls, foxes, cats, and snakes.

What is an interesting fact about Jerboas?

Jerboas are tiny rodents with a kangaroo-like jump!