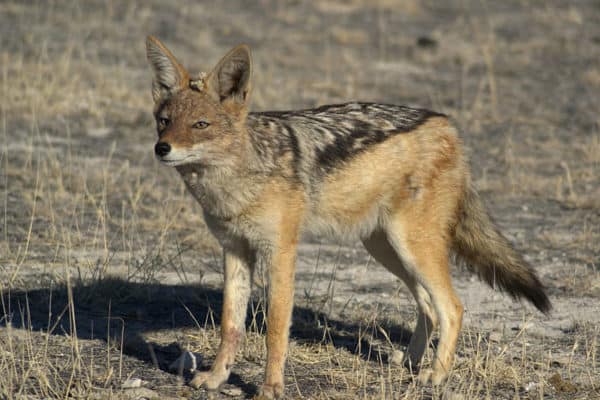 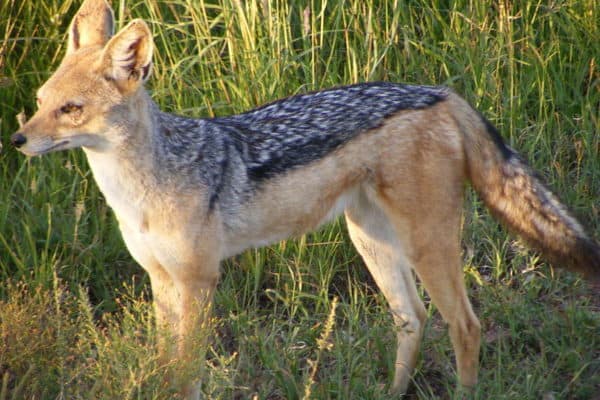 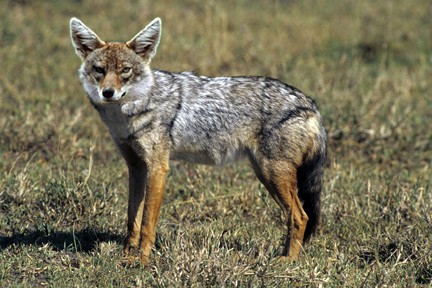 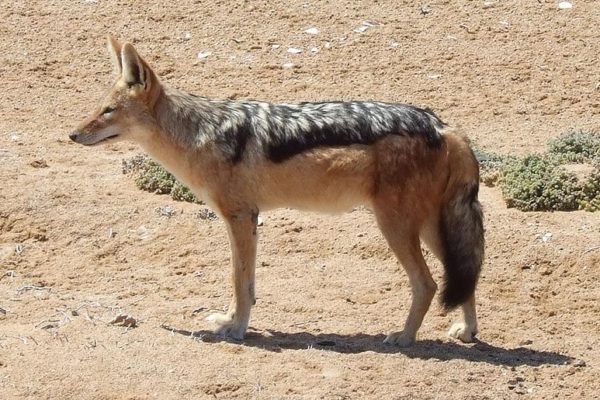 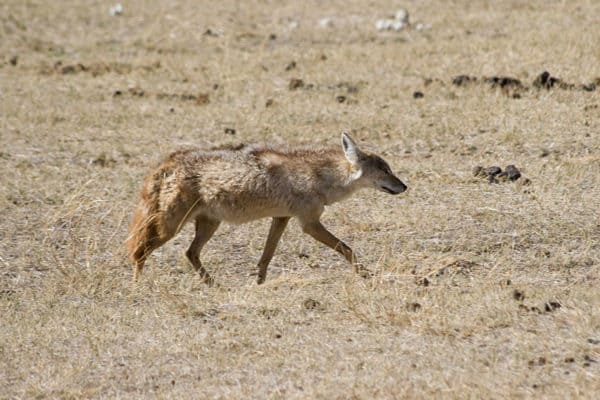 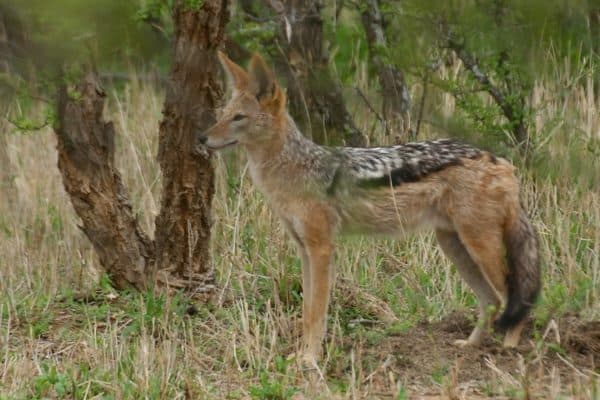 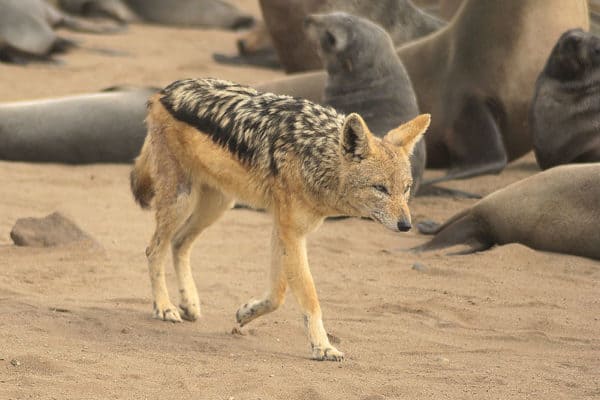 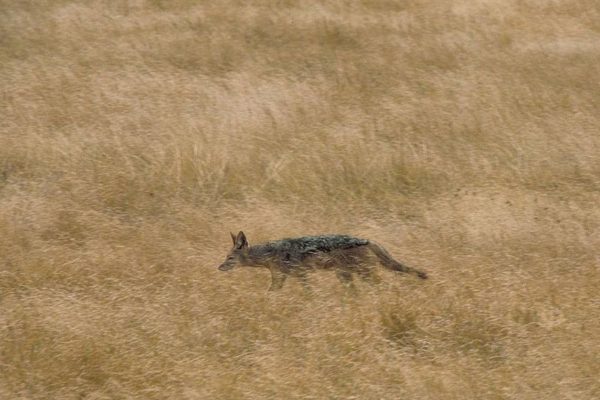 Jackals communicate with members of their pack using howls, growls, yipping, and even hooting sounds.

Jackals make their home in different parts of Africa as well as in European countries such as Greece, Romania, Italy, and Bulgaria along with others. They are omnivores eating both plants and meat. A male and female jackal are monogamous meaning they stay together throughout their lives and the pair raises their pups together. A jackal can live up to 12 years in the wild.

• Jackals in captivity can live as long as 16 years.
• Jackals hunt in pairs instead of looking for prey alone.
• A group of jackals is sometimes called a pack or a tribe.
• Jackals usually have from two to four pups in a litter.
• These creatures are canines with relatives that include coyotes, foxes, and wolves.

The scientific name of a common jackal is Canis aureus. The word Canis is Latin for dog and aureus means golden. So, it makes sense that another name for the common jackal is the golden jackal. Its family is Canidae and its class is Mammalia.

Along with the common jackal, there are two other species including the side-striped jackal and the black-backed jackal. The only differences between these three species of jackals is the color of their coat and the specific habitat they prefer to live in.

The common jackal has a coat that is a mixture of yellow, brown, and gold. The appearance of a jackal’s coat can become darker or lighter with the change of seasons. If you have a dog, you may notice that its coat gets thicker or changes color a little bit with the seasons. A similar process happens with jackals.

This animal has a long slim nose, large ears, and even a bushy tail that makes it look very similar to a fox. Remember, foxes and jackals are close relatives! Jackals have four slender legs, a trim body, and dark eyes that are always keeping watch on its surroundings.

A jackal measures around 16 inches tall from its shoulder and weighs from 11 to 26 pounds. If you put one number two pencil on top of another, then you are looking at about the height of a common jackal. Alternatively, a 26-pound jackal weighs about the same as an average-sized dachshund.

Jackals are fast runners, with the fastest speed for a jackal being 40 mph. They can run in short bursts of tremendous speed or for longer periods of time at a lower rate of speed. This speed helps them catch their prey and can keep them safe from some predators.

The color of a jackal’s coat helps it to blend in with its territory. Just think of how easily a common jackal would disappear into the light brown grass on the African savanna! This camouflaging helps to protect it if predators are in the area.

A jackal that is walking alone is likely to run away from a threat while a large group of jackals may stand their ground against a predator. A pack of jackals may even be able to overwhelm a leopard or a hyena. At the very least, a large pack may be able to chase the predator away.

Jackals are known to defend their territory using their sharp teeth and claws to drive any intruders away. A jackal’s fierce protection of its territory is a characteristic it shares with its wolf, fox, and coyote cousins. Not only is it protecting its home, but it’s also protecting any jackal pups in the area.

Jackals live in groups that can number anywhere from 10 to 30. They are called packs or tribes. These animals are normally shy and try to stay out of sight by taking cover in tall grass, in crevices of rocks, or behind trees. The only time they show aggression is when their territory is threatened by an intruder.

One of the most interesting things about jackals is their form of communication. In short, not all howls, growls, and yips are alike in the world of jackals. The members of a jackal pack or tribe have unique sounds they make in order to deliver a message to the rest of their family. All packs of jackals have their own sounds, so families in the area don't receive mixed messages!

One howling sound may mean that a jackal has killed prey and wants everyone in the family to eat. A yipping sound may warn other members of a pack there’s a predator in the area. The side-striped jackal is said to make a hooting sound similar to an owl. This unique sound has earned it the nickname ‘o loo’ in Uganda. 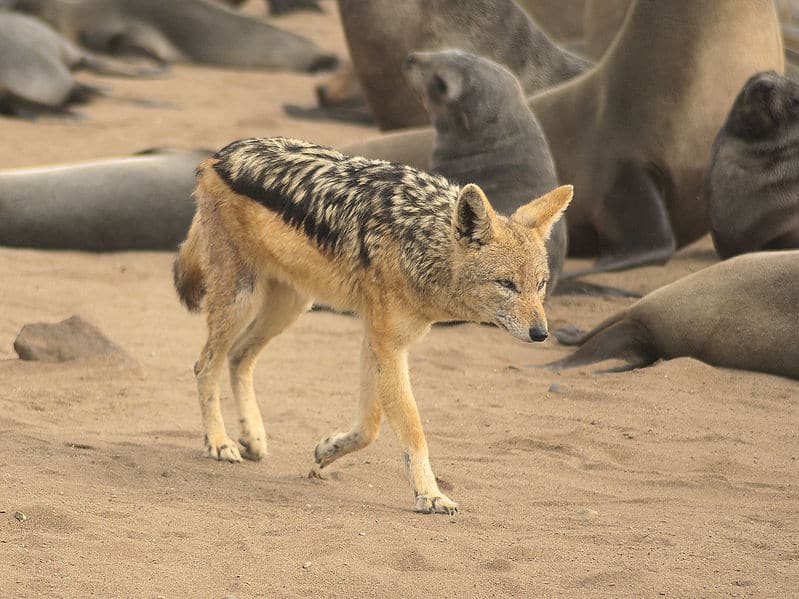 Jackals live in Africa and some European countries. In Africa, they’re found in the western and central part of the continent in Senegal, Nigeria, and South Sudan. They also live further south in Zambia and Zimbabwe.

The specific type of habitat a jackal lives in differs depending on which of the three species you’re looking at. Common or golden jackals live in savannas and deserts while side-striped jackals prefer wetter habitats like marshes, bushlands, and even the mountains. The black-backed jackal lives in woodlands and savannas. Though the regions are different, all three species can be found in Africa.

The long legs and sturdy feet of jackals allow them to easily travel the lengthy stretches of land while hunting. Their paws can withstand the heat as well as the rough dry ground. Jackals use their sense of hearing and smell more than their vision to find prey. They are active mostly at dusk and dawn. This is so jackals can avoid moving around in the hottest part of the day. Like domesticated dogs, they sleep a lot in the daytime.

What do jackals eat? Jackals are omnivores eating birds, berries, plants, rabbits, frogs, fruits, snakes, and small antelopes. Some scientists refer to jackals as opportunistic feeders. This means that they may steal leftover meat from prey killed by another animal. They take the opportunity to eat whenever they find food even if they didn’t hunt or kill it.

Usually, jackals hunt in pairs. This is so they can work together to trap and take down their prey. Though they have sharp teeth, these creatures are small, so it helps for two jackals to be cooperating as they hunt - especially if they’re going after larger prey.

Jackals have a few predators including eagles, leopards, and hyenas. All of these predators have great speed, strength, or both, making it fairly easy to capture a young jackal. It’s not unusual for an eagle to fly down and capture a jackal pup that’s playing outside its den.

Sometimes when their food sources are scarce, jackals make their way onto a farmer’s property to kill livestock. Some jackals are shot by farmers for this reason. Another human threat to jackals is loss of habitat due to land development and construction.

The official conservation status of the jackal, according to the International Union for the Conservation of Nature (IUCN), is least concern. In fact, their population is believed to be on the rise.

A male and female jackal work together to find or make an underground den where the babies will be born. A female jackal gives live birth to two to four babies, also called pups. Newborn pups are very small weighing less than a pound. They are born blind and nurse from their mother as well as consuming small amounts of soft food. At ten days old, the pups’ eyes open and at two months they begin to eat solid food.

Because they are so small, jackal pups are vulnerable to attacks from eagles, leopards, and hyenas. In fact, many of these pups don’t survive to 14 weeks old. As a way to protect her pups, a mother jackal moves her litter to different underground dens every few weeks. This makes it challenging for a predator to pick up and stay with the scent of the pups.

Both the mother and father jackal care for the pups teaching them how to hunt when they are about six months old. A jackal pup may leave its parents at 11 months of age to strike out on its own. Or it may stay with its parents to help care for other pups in other litters.

Jackals living in the wild live to be 10 to 12 years old. Wild jackals are vulnerable to many of the same ailments that a dog might face. For instance, they can contract rabies. A jackal that is old or injured is also more likely to be targeted by a predator than a young, healthy jackal.

Of course, jackals that are well cared for in a zoo or wildlife preserve can live longer, up to 16 years old.

The population of this species of jackal is believed to be increasing. Its official conservation status is least concern..

What is a jackal?

A jackal is a mammal in the canine family with close relatives that include coyotes, foxes, and wolves. And, of course, dogs. They are omnivores known for their habit of hunting in pairs and eating whatever they can catch or steal.

What is the Egyptian jackal?

You probably have seen an Egyptian jackal either online or in a school textbook for an ancient history class. An Egyptian jackal is a god in Egypt with the head of a jackal and the body of a human. This figure was believed by historians to represent the god of the dead.

Are jackals carnivores, herbivores, or omnivores?

Jackals are omnivores, so they eat both plants and meat. While they will eat pretty much whenever they have the opportunity, their diet most commonly consists of birds, plants, rabbits, reptiles, and small antelopes.

Where do jackals live?

Many jackals live on the continent of Africa. They also live in European countries including Greece, Bulgaria, Romania, and Italy. Some jackals live on savannas while others live in marshlands, deserts, woodlands, or the mountains. The habitat of a jackal depends on its species.

Jackals can be dangerous. Like other members of the canine family, jackals are territorial. They stake out a particular territory and mark it with their urine as a sign to other jackals to stay out. If another member of the wildlife community enters a jackal’s territory, it can become very aggressive. Jackals will fight with animals to defend their territory.

But most of the time, jackals stay hidden and would rather not have an encounter, including with humans.

How strong is a jackal’s bite?

A jackal’s bite is very strong. Sometimes a jackal will drag its prey to another area with the help of its mate. In order to take down a small antelope or a large bird, a jackal must be able to subdue it with its strong bite and sharp claws.

No, jackals don’t eat humans. But a human who wanders into the territory of a jackal may be bitten or attacked as a way to get the person to leave.

Think about a dog living in your neighborhood or town. Maybe you’ve seen it running around the fenced-in area surrounding its home. If someone opened the gate and entered the yard, the dog may bite the person in an effort to defend its territory. This is how a jackal would defend the territory where it lives with its family on a savanna or woodland in Africa!

View all 9 animals that start with J