They are the largest living turtle and the only sea turtle without a hard shell! 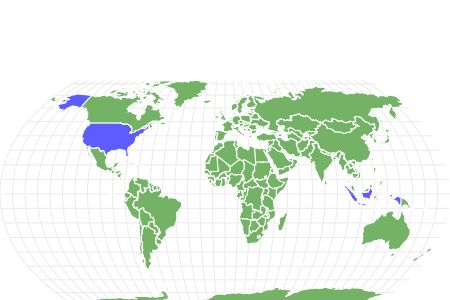 View all of our Leatherback Sea Turtle pictures in the gallery.

View all of the Leatherback Sea Turtle images!

The Leatherback Sea Turtle differs from all other sea turtles, in that it does not have a hard shell or scales. Instead, the Leatherback Sea Turtle has seven spiny vertical ridges made of bone where the shell would be on almost any other turtle, giving its back the appearance of strips of leather sewn together. A Leatherback’s tough rubbery skin is medium blue gray to black, with minor pattern variations, including spots and stripes, and a whitish pink underbelly. Their front flippers reach slightly more than halfway down their bodies, while their back feet are very short, and their flippers do not have claws.

The Leatherback Sea Turtle can be found in the tropical and temperate ocean waters on both sides of the United States , including Hawaii , and also places like Puerto Rico , the Virgin Islands and other parts of Indonesia , and Africa . Approximately the middle third of the globe is Leatherback Sea Turtle habitat. Their territory ranges from on land during mating season down to depths of 4000 feet when they dive.

Adult Leatherback Sea Turtles have few natural predators due to their size and how deeply they can swim, though racoons , crabs, and birds often feed on their eggs and young when left unattended. Unfortunately, Leatherback Sea Turtles still face many other threats to their lifespan and indeed the existence of their species, almost entirely from humans. Leatherback Sea Turtles are hunted by poachers and humans take their eggs. The Leatherbacks get sick or even die from eating human pollution in the form of fishing lines or plastic bags they mistake for jellyfish or just getting debris in their mouths. Leatherback Sea Turtles may even get caught in fishing nets. Climate change is also a factor in the declining numbers of Leatherback Sea Turtles, and there are instances of them being struck by marine vehicles. Because of this, they are listed as Vulnerable by the IUCN Red List. Conservation efforts to rescue their populations are underway and currently yielding promising results, but there is a lot of work to be done before they are out of danger, and they are at definite risk of extinction in the next few decades if things don’t improve.

Scientists do not know exactly when a Leatherback Sea Turtle reaches the age of sexual maturity, but it is believed to be between the ages of nine and 20. The reason is it so hard to determine is because they are most easily studied on land, but once they hatch and enter the ocean, female Leatherback Sea Turtles only come out of the water to lay their eggs. Males do not leave the water at all.

Leatherback Sea Turtles do not lay their eggs every year either which may be partly responsible for their declining numbers. Leatherback Sea Turtles do however lay more than one clutch of eggs per nesting season. Every two to four years, a female Leatherback will come ashore to nest after mating and will lay eggs several times that season. She will lay approximately 100 eggs into sand burrows. She will do this every eight to 12 days for a short period, laying about four to seven clutches in total, or between 400 – 700 eggs per season. After two months of incubation, the eggs will hatch into hatchlings. Their journey from nest to sea is perhaps the most perilous part of a Leatherback Sea Turtle’s life, as this is when they are the most vulnerable to predators and poachers.

Leatherback Sea Turtle numbers are in decline. In particular, the Pacific Ocean Leatherback Sea Turtle populations are declining and they are at risk for full extinction, with fewer than 3000 adult Leatherback females believed to be in existence in that area of the ocean. In 1980, there were over 100,000 female adult Leatherback Sea Turtles of all known areas thought to be in existence. At the most recent count, there were only around 25,000 – 35,000 female adults. Malaysian nesting grounds have completely disappeared, which is not a good sign. Nesting grounds in other places have severely declined, from thousands of nests down to only a handful per year.

The male population size of the Leatherback Sea Turtle is not known, but at least for the Pacific population, scientists worry that it will be below 1000 by 2030. It is harder to study the male Leatherback Sea Turtles because they do not leave the water during mating season as the females do, and population estimates are based on the fact that about 10 percent of hatchlings are male and 90 percent are females. So the male adult population is estimated to be about 10 percent that of the females.

There is good news, however. In 2020 and 2021, ecologists were able to successfully release tens of thousands of hatchlings into the ocean, and reduced egg poaching down to just a single percent of the total eggs. Keeping the hatchlings safe is paramount to ensuring the survival of the Leatherback Sea turtle species, so if these numbers are sustainable, it is possible that the Leatherback populations will once more be on the rise instead of the decline. Otherwise, Leatherback Sea Turtles face extinction within the next 20 years.

View all 63 animals that start with L

How many leatherback turtles are left?

Can leatherback turtles hurt you ?

While Leatherback Sea Turtles are not aggressive, if they feel threatened, they can and will bite a human with their powerful beak mouth, often leading to severe bruises or potentially breaking bones.

Why is the leatherback turtles going extinct?

The Leatherback Sea Turtle is in danger of going extinct because of habitat and nesting loss, human encroachment, poaching, getting caught in fishing nets, being hit by fishing boats and other marine vessels, and accidentally feeding on plastic bags and other trash in the ocean.

How many leatherback turtles are left in the world?

The exact numbers of male Leatherback Sea Turtles left in existence is not known because they do not leave the water during mating season like the females do, but it is estimated to be approximately 10 percent of the female population, or between 2500-3500.

How big is a leatherback sea turtle ?

A Leatherback Sea Turtle can vary in size from four to eight feet in length on average, with a weight between 500 and 2000 pounds.

What are the key differences between green sea turtles and leatherbacks? 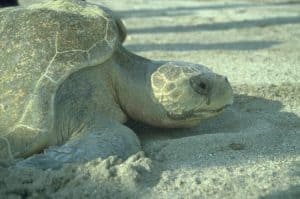 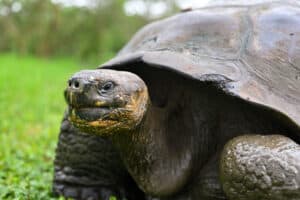 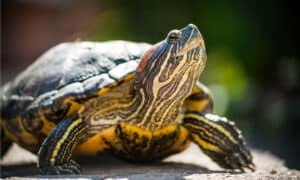