Click through all of our Kodkod images in the gallery. 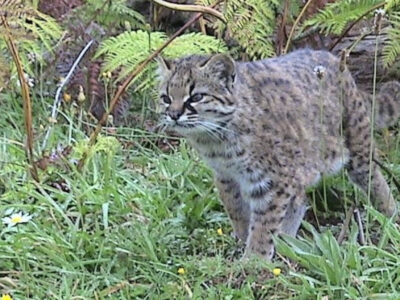 View all of the Kodkod images!

The kodkod (also known as the güiña or the Chilean cat) is a wild feline species located in South America.

Ranking among the smallest cats in the entire world, the kodkod roams the dense forests of the southern Andean region in pursuit of prey. They spend much of their time divided between terrestrial and arboreal habitats.

Unfortunately, this species faces many different threats in the wild. While not yet endangered, the numbers do appear to be in decline. Due to its reclusive nature and limited range, there are many facts about the kodkod’s behavior we still don’t fully understand.

The scientific name of the kodkod is Leopardus guigna. The genus of Leopardus, which also includes the ocelot and the margay, is derived from a combination of two ancient Greek words: leon, meaning lion, and pardos, meaning a male panther. Guigna itself is the common name of the kodkod in Chile.

There are two recognized subspecies: Leopardus guigna guigna in the south and Leopardus guigna tigrillo in the central and northern parts of the range. The former subspecies can be identified by the brighter colors and the presence of spot markings on the feet, while the latter has paler fur and no feet markings.

The kodkod bears many physical hallmarks of a feline, including the big eyes, long whiskers, flattened snout, and flexible but muscular frame. It is swathed in brown fur color, ranging in shades between pale gray and yellow, with a white underside. This is punctuated by black stripes and spots all over its body. Other kodkod features include a small, almost kitten-like head with black vertical markings just above the eyes. The short, rounded ears, as mentioned previously, have white spots on the back. The short but exceptionally thick tail, measuring about half the total body length, has 10 to 12 black rings and a wide tip. The feet and claws are also relatively large compared to body size.

Many of these characteristics are shared with other closely related species like the ocelot, which makes them difficult to tell apart. One way to distinguish them is their size (as well as their habitat). The kodkod is the smallest wild cat in the Western Hemisphere – and it ranks among the smallest in the entire world. Measuring up to 20 inches in length and about 5 pounds in weight, it rarely grows larger than a typical house cat. Male kodkods tend to be larger than females, but physical differences between the sexes (besides the obvious ones) are otherwise thought to be minimal.

The kodkod is, in many respects, a typical feline. It’s lithe, agile, and mostly solitary, except in the breeding season. Each cat maintains its own unique home range for feeding and mating purposes. Male ranges are larger than female ranges, but they do tend to overlap, probably to make mating easier, while overlapping male ranges are rarely tolerated.

The kodkod’s greatest asset is the ability to climb trees, which enables it to seek shelter, avoid predators, and locate prey on the ground. They can be active at any time of the day, but in order to protect themselves, they only venture out into open terrain under the cover of darkness. Like many felines, they probably use some combination of vocalizations, body posture, chemical cues, and tactile feedback in communication with each other. The most common forms of communication are between mother and kittens, between potential mates, and against intruders or threats.

The kodkod is native to the mixed temperate rainforests along the mountains and coasts of Chile and western Argentina. The greatest concentration of kodkods is located in the southern parts of Chile, thanks to the scarcity of human activity and the prevalence of protected areas in the region. The kodkod seems to prefer moist forests with a heavy understory or thick piles of vegetation (some of which even include bamboo) near an adequate source of water. Parts of its range may overlap with the Geoffroy’s cat (which it resembles) and the Pampas cat.

While the kodkod is not yet endangered, its numbers do appear to be in precarious decline. The single greatest threat to the kodkod is habitat loss and fragmentation from logging and agriculture, particularly in the temperate ecosystem of central Chile. The kodkod can adapt to some changes in its natural habitat, but it does need a certain amount of tree or vegetation cover in order to thrive.

Other threats to its survival include car accidents, feline diseases (passed over from house cats), and deliberate hunting. The kodkod is sometimes killed by farmers in its attempt to raid a chicken coop. One thing that saves from poachers is that its fur is not quite as valued as other South American cat species.

What eats the kodkod?

The kodkod has few documented predators in the wild, besides perhaps domesticated dogs. If it’s anything like other wild cats, then it also probably faces threats from eagles, snakes, and larger cats, especially when it’s just a kitten. The color pattern and arboreal lifestyle both provide a degree of protection against potential threats.

What does the kodkod eat?

The kodkod preys upon small rodents, lizards, insects, and various birds (like domestic chickens, geese, or thrushes). Its entire diet is purely carnivorous.

Much of the mystery surrounding the wild kodkod also extends to its mating behavior, including the timing of its breeding season, the courtship rituals, and parental investment. Because of its elusive nature, scientists have not yet attempted to do an in-depth study, and so certain assumptions and inferences have to be made about their reproductive strategies. For instance, the large home range of the male is thought to overlap with the range of multiple females, giving him exclusive access to mating partners. There is likely some competition between males for potential mates.

After a gestation period of around 72 to 78 days, the female gives birth to a litter of one to four kittens at a time. Based on the study of other wild cats, it is assumed that the mother will provide extensive parental investment both in terms of food/lactation and teaching the kittens how to hunt and survive. The father probably does not provide much of any care at all. The young kodkod will likely become independent from the mother shortly after it’s weaned from her milk, but it takes around two years to reach full maturation. Assuming they can survive against predators and threats, the kodkod is thought to have a typical lifespan of up to 11 years in the wild.

Due to the scarcity of concrete facts and data, there is a wide variance in the number of kodkods thought to be remaining in the wild. The IUCN (International Union for Conservation of Nature, a research and advocacy organization) puts the estimate at somewhere between 6,000 and 92,000 mature individuals, down quite a bit from its former height and still thought to be decreasing. The kodkod is classified as a vulnerable species by the IUCN Red List because of the threats it faces and its limited range.

While there are laws in place to protect the kodkod, they are weakly enforced and often ignored. In order to bolster their numbers, it will be necessary to preserve Chilean forests, create corridors between fragmented forests, place speed bumps and signs near frequent road crossings, strengthen law enforcement mechanisms, and reduce conflicts with humans (by funding predator-proof chicken coops for farmers). National Geographic announced that it would be funding one such conservation program in 2018.

View all 26 animals that start with K

What is a kodkod?

The kodkod is a small wild feline, native to the mountains and coasts of Chile and small parts of Argentina. It is distinguished by the exceptionally small size, the incredibly thick tail, and the brown to yellowish fur with black spots and stripes. While not yet endangered, the numbers have declined quite a bit from their previous heights.

Are kodkods carnivores, herbivores, or omnivores?

The kodkod’s diet consists of rodents, reptiles, birds, and insects.

Is the kodkod dangerous?

The kodkod is too small and skittish to pose much of a danger to people (though like a house cat, it may lash out and bite a person if threatened or cornered in some way). They do have a tendency to attack and kill domestic poultry, however.

Can the kodkod be kept as a pet?

Wild cats do not generally adapt well to being a pet, unless it was raised by people from a very young age. And because of their vulnerable status, they should not be sold as pets anyway.

What is another name for the kodkod?

The common name for a kodkod in Chile is a güiña (also stylized as guigna in English). An alternate name for this animal is a Chilean cat.

How do you pronounce the name?

What is the predator of the kodkod?

The kodkod has few known predators in the wild except for maybe domesticated dogs, snakes, or eagles.

How big is a kodkod cat?

The kodkod is about 15 to 20 inches long and weighs an average of only 5 pounds.