The redback spiders found in New Caledonia differ from other populations in that they don’t practice sexual cannibalism and don’t bite people as much. 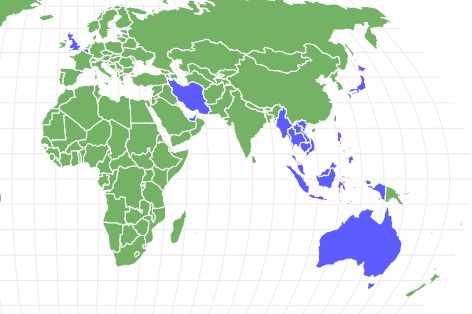 View all of our Redback Spider pictures in the gallery.

View all of the Redback Spider images!

“The black widow’s cousin down under.”

Similar in appearance to North America’s black widow, the redback spider is that rare spider whose venom can cause severe symptoms in humans. Their preferred habitat is in and around human dwellings, which increases the chance of a human running afoul of these small and otherwise shy creatures. Read on for more information about the redback widow:

The spider’s scientific name is Latrodectus hasselti. Latrodectus is from the Latin latro, which means “brigand” and the Greek dḗktēs, which means “spider.” Its epithet honors the scientist A.W.M. van Hasselt. Though there are a good number of spiders in the Latrodectus genus, L. hasselti seems to have no subspecies.

Appearance: How To Identify the Redback Spider

The female L. hasselti is easy to identify. She is about 0.39 inches long and has a glossy black body and a round abdomen. She has eight slender legs, with the first two legs being much longer than the others. Her most notable feature is a bright red or sometimes orange stripe down the length of the top of her abdomen. When she’s younger, her abdomen is mottled with red and white.

The male is much smaller than the female at 0.12 to 0.16 inches long, and he’s a light brown. He may also have a red stripe with white spots on the top of his abdomen or a red hourglass beneath. You can also tell he’s a male redback spider because he’s found in the female’s web. Though he tries to stay out of her sight because she’ll eat him, he does steal bits of her food when she’s not looking. His bite may not be as dangerous as the female’s but is venemous enough to be painful.

Redback spiders are solitary and only deal with each other during mating. Though females are shy when it comes to humans, they treat everything else, including conspecifics, with hair-raising savagery. When prey gets tangled in one of its trap lines, the spider bites it over and over and wraps it up in silk. Sometimes the prey doesn’t die right away, but the spider stores it until it stops struggling, and the venom has liquified its insides. If the spider’s hungry, it will start to eat well before the prey is dead.

Mating is perilous for the male spider as the female eats him more often than not. Indeed, he offers himself to her as he stealthily adds packets of sperm to special organs in the female that store sperm. This might be worth it to him because most male redbacks never get a chance to mate in the first place, and if she eats him, he’s more likely to be the father of her children. Female redback spiders who eat their mates do not seem interested in mating with other males.

Baby L. hasselti spiders look like tiny adults. They leave their mother’s web through kiting. They stand on their heads, release some silk and let the wind whisk them away. Wherever they land, they build a web.

Habitat: Where to find the Redback Spider

Redback spiders like to live in and around houses in temperate and tropical zones. This may mean the dark corners of closets, cabinets, and garages. Outside they’ll build a place to live in logs, stacked cordwood, rocks, discarded tires, boxes and cans, under piles of rubbish, and in or under mailboxes. Basically, the spider can spin a web in or around anything that is left undisturbed for a period of time.

Diet: What do Redback Spiders eat?

Redback spiders are largely insectivores. They’ll take insects as small as ants or as big as the Cromwell chafer beetle, an endangered flightless beetle that’s endemic to Central Otago in New Zealand. L. hasselti also eats trapdoor spiders, woodlice, small reptiles, and even birds and mice that get caught in its traps. It will also steal food from other spiders. If the spider challenges it and is killed, the redback will eat the vanquished spider as well. Male redbacks steal food from females, and hatchlings steal food from their mothers.

Prevention: How to get rid of Redback Spiders

Though the spider is good for the control of insect pests, many people may not want such a dangerously venomous spider living in close proximity. In that case, the spiders’ webs can be vacuumed up and the spiders and their egg cases destroyed. Outside structures such as sheds and outhouses should be tidied and possibly sprayed with insecticide. If the property owner wishes to use more eco-friendly methods of spider control, they can purchase Ichneuman wasps or the tiny Philolema latrodecti wasps, which parasitize the redback spider’s egg case.

All spiders are venomous, but the redback spider is one of the few spiders that are really dangerous to humans. Its venom is based on latrotoxin, which causes a flood of neurotransmitters in humans that leads to what can be severe symptoms. Antivenom administered in time can prevent or ease symptoms.

How many legs does the redback spider have?

Like other spiders, the redback spider has eight legs.

How do you identify redback spider?

The female redback spider can be identified by its glossy black body and the single red stripe down its abdomen. The male is much smaller, light brown, and may also have a red stripe.

How do you get rid of the redback spider?

Redback spiders can be squashed or sprayed with insecticide as readily as other spiders, though you should take precautions to not get bitten. Remove trash and other unnecessary items from the yard and spray outhouses. Encourage the presence of parasitic wasps that prey on the spider and its eggs.

What is a redback spider?

Latrodectus hasselti is a spider that lives in Oceania, Southeast Asia and west to Iran and north to Japan. Unlike most other spiders, its venom is dangerous to humans. However, it is shy, at least when it comes to humans and tries to stay out of sight.

What happens if you get bitten by a redback spider?

If the spider envenomates you, you’ll feel pain around the bite right away that gets worse over time. It’s followed by rigid abdominal muscles, headache, tachycardia, nausea, vomiting, and sweating. If you don’t get antivenom, the symptoms can last for days followed by a weakness that persists for weeks.

It is a little spider whose female is glossy black in appearance with a red stripe down her abdomen. The male is much smaller and brownish.

The site around the bite of the spider is painful and has gooseflesh. There will also be sweating around the area. You won’t necessarily see bite marks or redness.

Can a redback spider kill you?

It is unusual for the bite of this spider to kill you, but death has occurred in people who are already ill or who are very young or very old and were not given antivenom. Even if the bite doesn’t kill, it can make you feel quite miserable for days.

Do redback spiders live in America?

Redback spiders aren’t found in America, but their cousin the black widow is.