The smallest species of bear in the world!

The Sun Bear is a small species of bear that is found inhabiting the dense, tropical forests of south-east Asia. The Sun Bear is the smallest species of bear in the world and it is also one of the most unique, being the only member of its family that has not only adapted to living in the jungle but also leads an exclusively tree-dwelling life. Also known as the Malaysian Sun Bear and the Honey Bear, the Sun Bear has a number of distinctive features most notably the orange U-shaped marking on its chest from which it gets its name. Sun Bears are both rare and elusive animals meaning that very little is actually known about their behaviours and habits in the wild (or indeed exactly how rare they are). Populations however, are known to be drastically decreasing as Sun Bears are threatened by both hunting and habitat loss throughout much of their natural range.

The Sun Bear is not only the smallest bear species in the world but it also has the shortest fur. The sleek, glossy coat of the Sun Bear ranges from black to dark brown or grey in colour with their distinctive chest marking varying from white to yellow or orange, and can take a number of shapes including the standard crescent, a circle or an irregular spot. The Sun Bear has a light-coloured face with a short muzzle, which along with their short fur and ears, is thought to be an adaptation to spending so much time in the trees. They also have long, curved claws on their front paws which help the animal to climb trees and break open hollow logs in search of termites, which it is also able to do with its large canines and strong jaw. One of the most remarkable features of the Sun Bear is its long tongue that can be up to 25cm long and is used to extract grubs and honey from nests and crevices.

The Sun Bear would have once been found throughout a number of countries in south-east Asia but due to growing Human development, they are now only found in a handful of increasingly isolated habitats. Sun Bears can be found on the islands of Borneo and Sumatra, in forests on the mainland (Malaysia, Thailand, Cambodia, Laos and Vietnam) and there are also a few remote populations of Sun Bears in eastern India and southern China. The Sun Bear inhabits primary, lowland rainforest where there are not only a wide variety of foods to eat, but also plenty of cover to remain safe from predators. However, throughout much of their natural range (but particularly in Indonesia and Malaysia) the Sun Bear has lost vast regions of its native habitats to deforestation, primarily to clear land for agriculture (such as palm oil plantations) and to cut down the rare and valuable tropical trees for the timber industry.

The Sun Bear spends the majority of its life high in the trees and even sleeps in a nest in the canopy which is built out by folding leafy branches over. They are therefore incredibly adept at climbing which they can do with remarkable speed using their long, curved claws. However, Sun Bears are also known to climb trees by actually hugging the trunk with their front limbs and by gripping with their strong teeth they are able to haul themselves up. Oddly enough, Sun Bears are primarily diurnal animals that spend the daytime foraging for food and resting high in their tree-top nests at night but, in areas that are being increasingly affected by growing levels of Human activity Sun Bears are known to adopt a more nocturnal way of life to avoid confrontation. Like the other bear species, Sun Bears are also solitary animals that are only really seen in each others company when a male and female are looking to mate.

In the same way as a number of other animal species that are found in the tropics, the Sun Bear is known to both mate and give birth all year round. After a gestation period that is known to vary dramatically (between 3 and 8 months) depending on the individual and the amount of food available, the female Sun Bear gives birth to up to three cubs (but usually only one cub is born) in a nest that she makes in a large cavity such as a hollow tree. The young Sun Bear cubs are nursed and fiercely guarded by their mother and are taught the skills of surviving in the tropics until they become independent of her when they are nearly two years old and leave to establish their own territories. Females are usually able to reproduce themselves when they are three years old and males a year later. Sun Bears are thought to live for an average of 25 years in the wild but have been known to commonly be more than 30 years old in captivity.

Despite technically being a classed as a carnivore, the majority of the Sun Bears diet is comprised of fruits and other plant matter that it finds in the surrounding forest. Like other bear species, their molar teeth have lost their “flesh-shearing” capabilities and are instead flatter to help with the grinding down of vegetation. Sun Bears eat a wide variety of fruits, nuts, berries and shoots along with supplementing their diet with insects, grubs, honey, eggs and small animals such as rodents when plant matter is scarce. By using their strong teeth and sharp claws Sun Bears are able to break open hollow logs before using their long tongue to extract the termites inside. However, when it is not possible to break the nest in a tree trunk, Sun Bears are known to place their front paws into the hole one at a time, allowing the termites to crawl over their paws before the Sun Bear then licks them off.

Due to the relatively large size and tree-dwelling nature of the Sun Bear, adults have relatively few predators in their native environment. Large carnivorous animals like Tigers are the main predators of the Sun Bear but these animals have evolved another unique adaptation to help them to escape in these situations. The Sun Bear has loose skin particularly around its neck which means that is if is caught by a predator, it is able to still spin its head round to try and bite its attacker. Sun Bear cubs however, are much more vulnerable and are preyed upon by a variety of jungle predators including Snakes and large Birds of Prey. The biggest threat though to south-east Asia’s remaining Sun Bear populations is the drastic declines in much of their natural habitats due to deforestation. In areas where agricultural plantations encroach on their territories, Sun Bears are also known to raid oil palms particularly to eat the young shoots. They are therefore also persecuted by farmers who fear for the stability of their crops.

The Sun Bear is known by a number of different names but its small size, short snout and ears, and short, glossy fur has led it to being commonly known as the “Dog Bear” in local communities. Although the Sun Bear is generally solitary on rare occasions a few individuals are known to congregate around ripening fruit trees and will tolerate one another while they feed. Even though Sun Bears are similar in varying parts of their natural range, there is actually a smaller recognised sub-species of Sun Bear that is found on the island of Borneo but very little is known about it. Unlike a number of the other eight bear species around the world, the Sun Bear does not hibernate. Due to the fact that Sun Bears are found in the tropics where there are not such sweeping seasonal changes, they simply have no need to sleep through the winter months (breeding is also known to occur all year round for the same reason).

Since modern people arrived in south-east Asia thousands of years ago, Sun Bears have been hunted mainly for the use of certain of their body parts, particularly their gall-bladders, in local Asian medicine markets (which has also been the main reason for the drastic declines in nearly all other bear species too). Due to their small size and generally docile nature, Sun Bears have also been captured to be sold into the exotic pet trade around the world. However, the biggest problem for the Sun Bear today is the fact that it has lost vast areas of its once extensive natural habitat to deforestation for logging and land clearance for agriculture (most of which is illegal). As the Sun Bear spends the majority of its life in the trees, they rely heavily on the rich, dense rainforests that they have become accustomed too, but much of it today has now disappeared with growing Human activity.

Today, the Sun Bear is listed by the IUCN as an animal that is Vulnerable in its natural environment and is therefore at risk from becoming extinct in the wild in the future. The elusive nature of the Sun Bear makes it difficult for anyone to really know exactly how threatened they are but populations are thought to have fallen by up to 30% in the past few decades. Sun Bear numbers are still declining and although their exact population numbers are unknown, there could be less than 1,000 individuals left in the wild today. Although illegal deforestation is harder to control, Sun Bears are protected by anti-poaching laws to help prevent so many being continually hunted in the future.

Click through all of our Sun Bear images in the gallery. 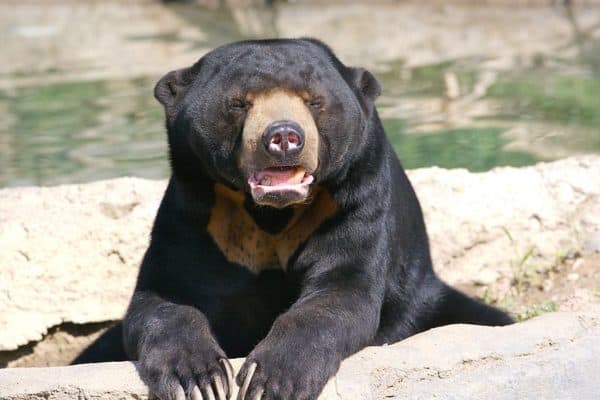 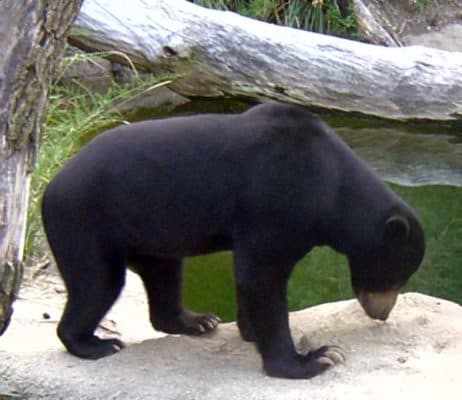 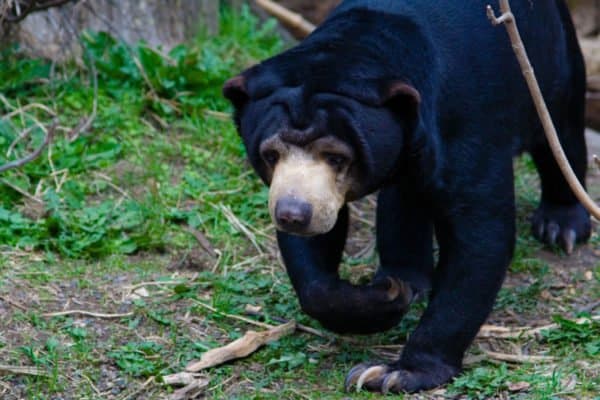 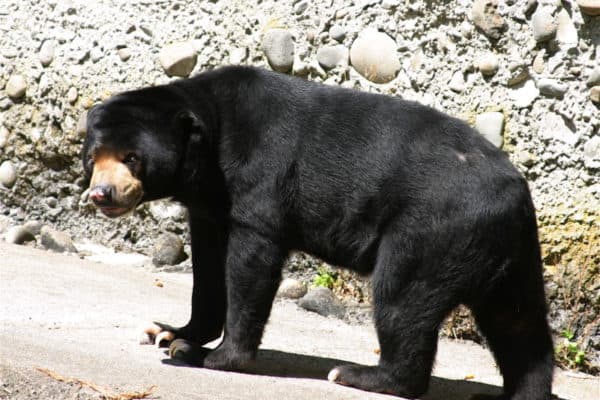 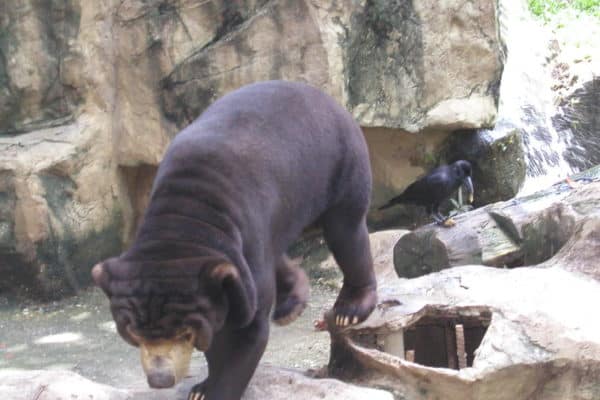 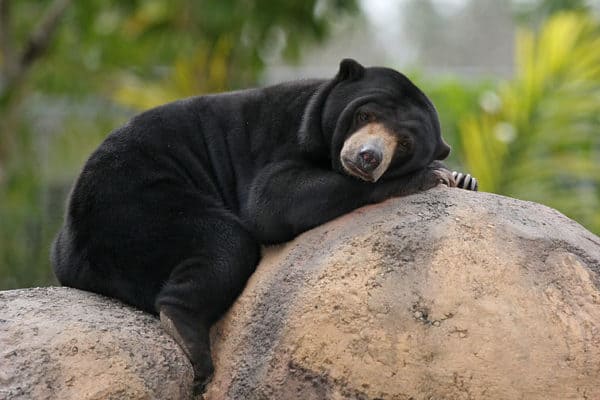 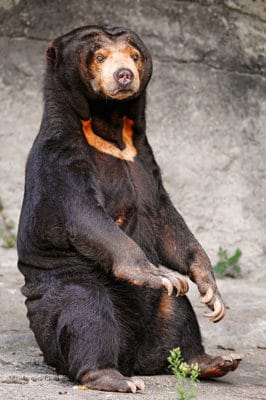 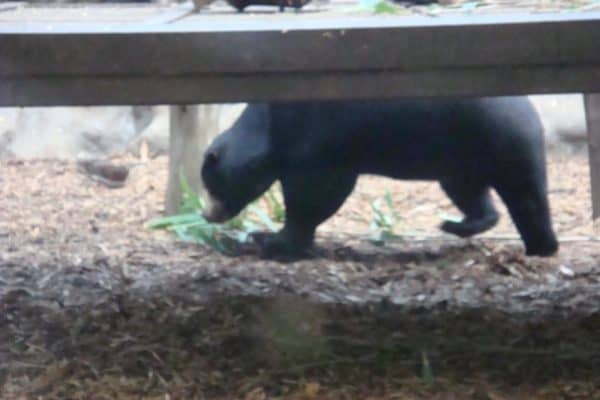 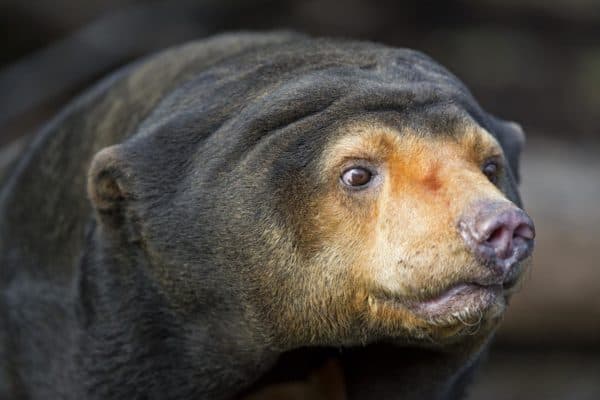 View all of the Sun Bear images!

Sun Bears are Omnivores, meaning they eat both plants and other animals.

What Kingdom do Sun Bears belong to?

What class do Sun Bears belong to?

What phylum to Sun Bears belong to?

What family do Sun Bears belong to?

What order do Sun Bears belong to?

What type of covering do Sun Bears have?

Sun Bears are covered in Fur.

What genus do Sun Bears belong to?

Where do Sun Bears live?

In what type of habitat do Sun Bears live?

What are some predators of Sun Bears?

Predators of Sun Bears include tigers, snakes, and birds of prey.

How many babies do Sun Bears have?

The average number of babies a Sun Bear has is 2.

What is an interesting fact about Sun Bears?

Sun Bears are the smallest species of bear in the world!

What is the scientific name for the Sun Bear?

The scientific name for the Sun Bear is Helarctos malayanus.