Twig snakes are among the few rear-fanged colubrids whose bite is highly venomous and potentially fatal. 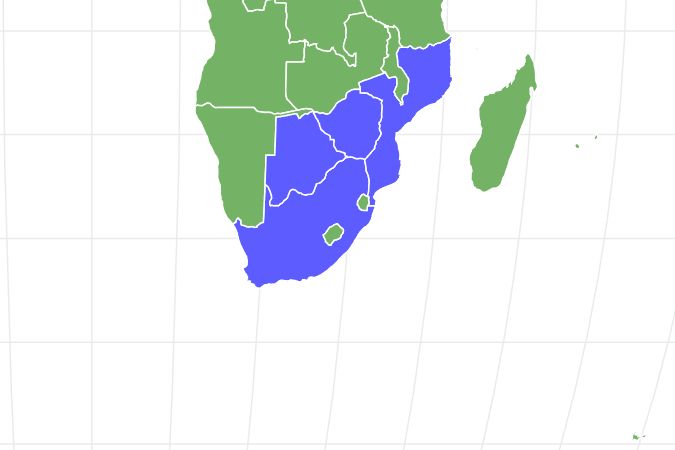 View all of our Twig Snake pictures in the gallery.

View all of the Twig Snake images!

The twig snake is also known as a vine snake because of its long, narrow body. These snakes are native to the southern part of Africa and have a lifespan of eight to twelve years. Their diet includes tree frogs, lizards, and sometimes birds. This reptile has gray and brown scales that allow it to blend into its woodland habitat. Two of the most distinctive features of this snake are its horizontal pupils shaped like keyholes and its bright red tongue.

Where to Find a Twig Snake

The twig snake is found in the southern part of Africa. Specifically, they live in Namibia, Zimbabwe, and Zambia as well as in parts of Mozambique.

This snake lives in a forest or savanna habitat where it’s able to blend in with tree branches, bushes, and shrubs. One of the most amazing facts about this reptile is it can hang from a branch to grab tree frogs, lizards, and other prey.

Thelotornis capensis is the scientific name of the twig snake. It’s also known as a bird snake and forest vine snake. It’s a part of the Colubridae family and the class Reptilia.

One subspecies of this reptile is:

The population of the twig snake is unknown. However, herpetologists categorize its population as stable with a conservation status of Least Concern.

How to Identify a Twig Snake: Appearance and Description

The colors of a twig snake’s scales are gray and brown. Its underside is a combination of gray and pink. This reptile’s nose is pointed rather than rounded like other types of snakes.

Furthermore, it has light-colored eyes with horizontal black pupils. In fact, its pupils are one of its most distinctive features. This is because they have a shape like a keyhole. Studying its pupil shape can definitely help with the proper identification of this reptile. The horizontal positioning of its pupils helps this snake to have an expansive view of its surroundings.

Another one of this snake’s most distinctive features that can help with identification is its bright red tongue. Some people believe the snake uses its tongue to lure prey into its vicinity, but that’s just a myth.

Twig snakes can grow to a length of 48 inches. As their name implies, these reptiles have a thin, narrow body size similar to a twig or a vine hanging from a tree.

How to identify a twig snake:

Twig Snake Venom: How Dangerous Are They?

The bird snake is extremely venomous. Its venom is categorized as hemotoxic. This reptile bite can cause internal bleeding.

A bite from this snake is rare. This is true for a couple of reasons. For one, these snakes are shy with a mild temperament. They stay hidden most of the time which is easy for them. Their grayish/brown scales serve as excellent camouflage in their woodland or savanna habitat. So, chances are you wouldn’t see a twig snake even if you were near one. Trying to climb a tree in this snake’s habitat would be an activity to avoid!

Second, they are not aggressive unless they feel threatened. When this snake feels threatened it inflates its neck to make it appear larger in size. It does this in an effort to scare predators away. In other words, the twig snake tries to avoid using its fangs unless it’s hunting prey.

If you do happen to be bitten by a twig snake aka vine snake, medical attention is necessary due to its potentially deadly venom. Keep the area where you were bitten lower than the level of your heart. This helps to prevent the venom from spreading.

As a note, because twig snake bites are so rare, an antivenom has not been developed for this particular snake.

Most humans won’t encounter the venomous bird snake. This reptile lives in forests and savannas, high in the branches of trees or in dense bushes.

In addition, this snake is timid and its colors help it to hide in its branch-filled habitat. So, even if a person was in a location with these snakes nearby, it would be very difficult to spot any of them due to this reptile’s ability to camouflage itself.

Herpetologists and other wildlife experts who handle these snakes are the most likely to be bitten.

View all 85 animals that start with T

How big is a twig snake?

The twig snake can grow as long as 48 inches (four feet). In addition to its tremendous length, its body is very slim which is why it is called a twig or vine snake. When it hangs from a tree branch it looks a lot like a vine.

What do twig snakes eat?

The diet of the bird snake does include birds. However, birds are not their main source of sustenance. These snakes eat mostly lizards and tree frogs.

They can be dangerous. The vine snake has potent venom that causes severe internal bleeding and possibly death depending on the amount of venom released by the reptile.
Keep in mind these timid snakes want to stay away from human activity. Their main defense against any predator is camouflage. The brown and gray scales on this snake’s body cause them to virtually disappear into their tree-filled habitat. They don’t become aggressive unless they are threatened.

Is a twig snake poisonous?

Yes. They have extremely potent venom and use it to kill their prey.

Why is there no antivenom for a vine snake?

This is one of the most interesting facts connected with the vine snake. There’s no antivenom for this snake because a bite from this reptile is a rare occurrence.

Can you survive a twig snake bite?

Yes. The amount of venom injected through a bite can vary. In fact, sometimes snakes give what are known as dry bites. These are bites containing no venom. Dry bites are used by many snakes as another warning to predators to go away. However, medical attention is definitely necessary any time someone is bitten by a bird snake.
Sometimes the symptoms resulting from a vine snake bite don’t appear for 24 to 48 hours. But it’s still important to seek medical attention.

How do twig snakes hunt?

Twig snakes keep perfectly still as they blend into their habitat of trees and bushes. So, the vine snake is able to grab its tree frog, bird, or lizard prey before being seen. It uses its venom to kill whatever it captures.

Sometimes this vine-like snake hangs upside down from a branch to capture its prey. After injecting the animal with venom, the twig snake remains upside down, swallowing its prey. This snake has fangs in a location at the rear of its mouth.

No. In terms of identification, they are described as timid, non-aggressive snakes.

Where do twig snakes live?

Twig snakes are native to the southern part of Africa. Specifically, in Namibia, Zambia, Mozambique, and Zimbabwe. They live in a savanna or forest habitat in trees, bushes, or thick shrubs.