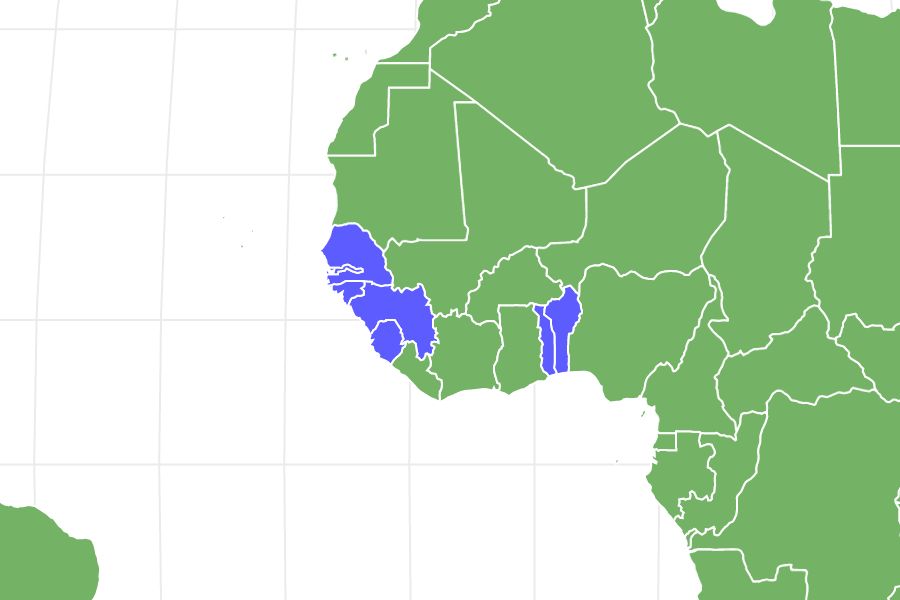 View all of our Western Green Mamba pictures in the gallery.

View all of the Western Green Mamba images!

Western green mambas can reach a length of up to eight feet.

A collection of bright, green scales is just one of the many notable things about this snake. It can also travel through its tropical forest or savanna habitat at an average speed of 7mph! The western green mamba consumes a diet of birds, squirrels, and mice. It has potent venom with the potential to cause death.

Where to Find a Western Green Mamba

This snake lives in the western part of Africa. It’s found in the countries of Benin, Gambia, Guinea, Guinea-Bissau, Senegal, Sierra Leone, and Togo.

They live in a tropical savanna, mangrove, rainforest, or tropical dry forest habitat. While they spend most of their time in the trees, they are also found on the ground hunting, looking for water, or searching for mates. They are active and most visible during the daylight hours.

There are a total of four species of mamba snake. They are members of the Elapidae family.

Dendroaspis viridis is the scientific name of a western green mamba snake. The Latin word Dendroaspis means tree asp and the word viridis means green.
It’s a part of the Elapidae family and the class Reptilia.

The population information on the IUCN Red List of Threatened Species doesn’t include a specific number, but the western green mamba is of Least Concern. It’s thought of as common in many areas and its population is stable.

The color of a juvenile’s scales is blue/green until the snake reaches a size of 30 inches. From there, the snake starts to take on the bright green scales of an adult.

This African snake has a long slender body measuring from 4.6 up to 8 feet. Its color and slender structure allow this snake to blend very well into its habitat in the trees. It curls around the branches and adeptly moves through the different levels of a tree. Sometimes this snake remains in the same tree for several days.

Their round eyes have yellowish-brown irises.

How to identify a western green mamba:

Western Green Mamba Venom: How Dangerous Are They?

These snakes are dangerous with potent, fast-acting venom. In fact, the venom begins to cause symptoms in someone who is bitten within about 15 minutes. The fast-acting nature of its venom has resulted in several fatalities.

But, keep in mind, they spend most of their lives high up in the trees. So, humans usually don’t see them much less get bitten by one. Also, this species is considered a shy snake. You may have heard myths about the aggression of mamba snakes. There is even a myth that the black mamba will chase a human in an effort to give them a venomous bite! But factual information about this reptile shows the western green and the other species of mambas are most likely to try to escape when threatened.

The first step to take if bitten is to get to a hospital for antivenom. The bite wound should be snugly wrapped along with the upper part of the person’s affected arm or leg. Keeping the wounded limb as still as possible is an essential part of the care in this situation.

These snakes live high up in trees occasionally coming down to hunt for prey. Consequently, humans and western green mambas rarely interact. Also, these snakes are shy and move away from possible encounters with people.

Yes, one of the first pieces of information to learn about this snake is it strikes quickly with fast-acting, strong venom.

How do western green mambas hunt?

Western green mambas are active during the day and have superb vision. They combine their excellent vision, sense of smell and great speed to search for prey. When they locate prey, these mambas strike several times very quickly injecting venom into the animal. The rodent or bird dies quickly from the venom allowing the snake to swallow it.

No. Western green mambas are not aggressive.

Where do western green mambas live?

This snake is native to the western portion of Africa. Specifically, it lives in Benin, Gambia, Guinea, Guinea-Bissau, Senegal, Sierra Leone, and Togo.

Western green mambas are found in a tropical climate. They are seen in savannas, rainforests, and mangroves as well as in a dry forest habitat. They are called arboreal snakes because they live most of their lives in trees.

What do western green mambas eat?

The diet of this snake features squirrels, rodents, and birds.

How venomous is the western green mamba?

Its powerful venom has caused human fatalities and kills their prey very quickly. Antivenom is an essential part of care for a bite wound.

What are the 4 types of mamba?

The diet of these two snakes is a little different as well. While the western green mamba snake has a diet of squirrels, rodents, and birds the eastern green mamba eats those animals as well as bats.

In relation to diet, the method of hunting can differ between these two snakes. The eastern green mamba has been known to sit and wait in the branches of a tree near a bat cave. When a bat, or group of bats flies out, the snake uses its speed and accurate movements to capture its meal.