Xerus use their fluffy tail as shade from the sun on the African savanna.

Click through all of our Xerus images in the gallery. 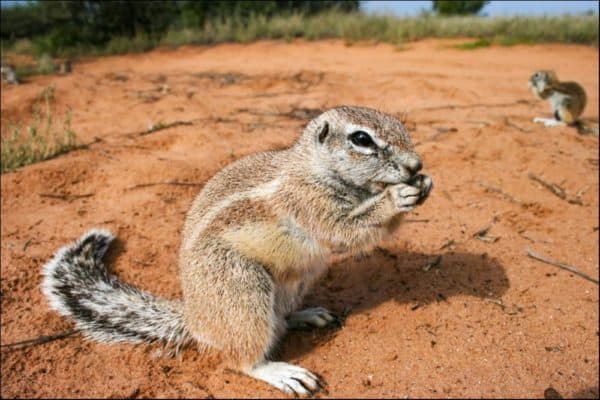 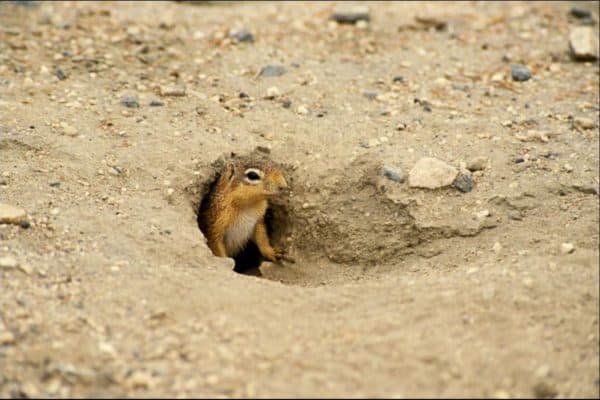 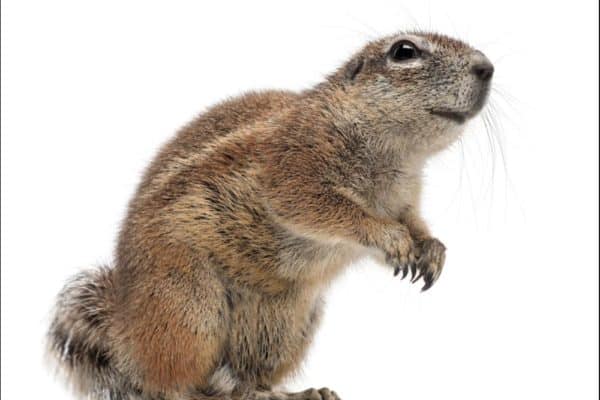 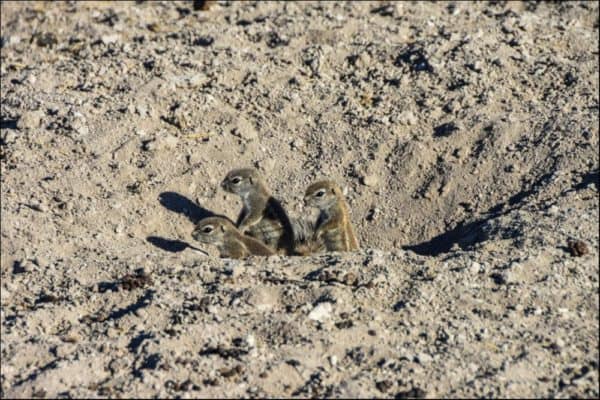 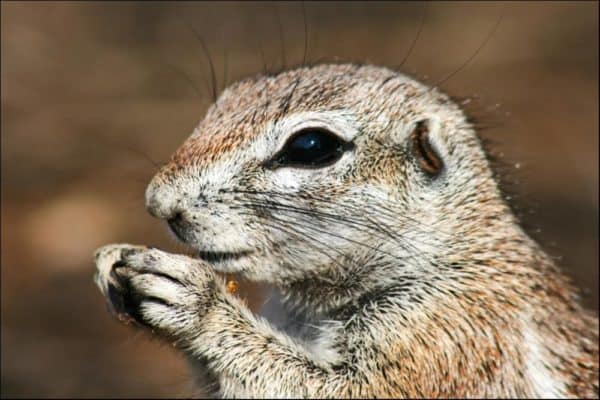 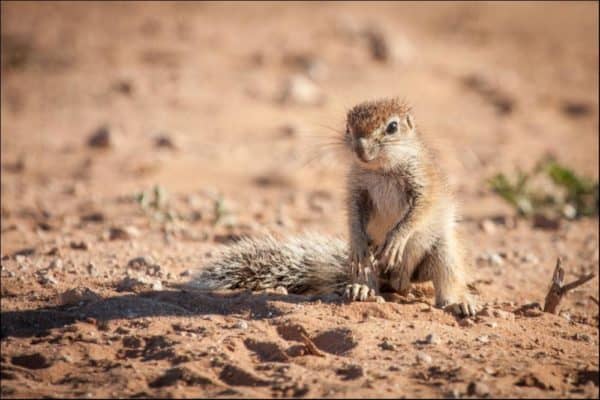 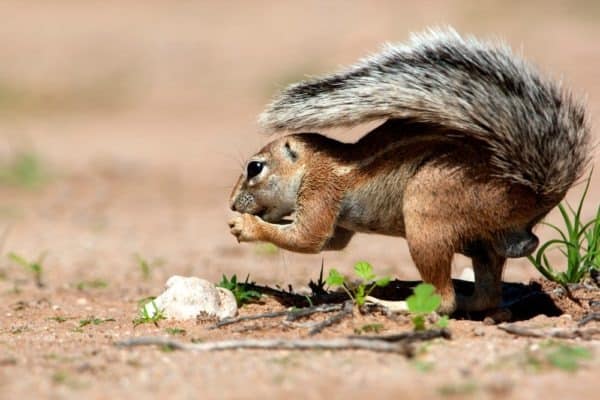 View all of the Xerus images!

A Xerus uses its fluffy tail as shade from the sunlight in Africa.

Xerus erythropus which is commonly known as African ground squirrel and is native to Africa. They have coarse and short hair and are known to be social animals. They can survive in captivity for about 11.5 years.

These animals are diurnal and are usually known to be herbivores in nature and usually eat nuts, roots, and seeds. However, sometimes they also eat eggs and other small animals.

Commonly known as the Xerus, these animals go by the scientific name of Xerus erythropus and belong to the family Sciuridae and phylum Chordate. They come from the Mammalia animal class.

These squirrels are covered in fur from head to toe which is often the light-brownish color of the soil. However, it can also be found in reddish-grey or yellowish-grey fur. However, their feet have relatively lesser hair than the rest of their bodies. While the pads of their feet have minimum to no hair, the foot itself has some hair.

In the case of the striped ground squirrel, the body has a white stripe running on both sides and shoulders. The tail is usually flat and is a darker shade than the body fur. The ears of the animal are usually small and the claws are long and curved. However, these claws do not allow the creature to climb trees.

Their height can be anywhere between 17 to 18 inches, excluding the tail. The tail is about 7.5 to 10.2 inches long, making it approximately one-third of the Xerus’ full length. However, the size of the squirrel usually and mostly depends on the subspecies in question as all four could have some differences.

They usually weigh about 14 ounces. These squirrels use their tails as protection from the scorching heat.

The Xerus is known to be a social animal who lives in groups. Adult males form their groups that have around 19 to 20 members each. Females, on the other hand, usually live in a group of one to four along with their offspring.

The Xerus are known to live in open areas, especially woodland, desert, or grassland. However, they can be found throughout Africa. One of the subspecies even makes its home in rocky regions, including the mountains.
While they are terrestrial, their diurnal habits allow them to explore much of the area that they reside in for food.

Though many other squirrels and similar animals are known to live in trees, Xerus make their home in burrows instead. To find any of these animals in the wild, check out certain areas of the desert in South Africa, Namibia, Lesotho, and Botswana. The squirrels are not known to migrate, so the odds of seeing one are fairly high.

Xerus dines on a variety of foods like nuts, roots, and seeds. The cape ground squirrel particularly likes shrubs and bulbs as well. They also will consume yams, cotton, cassava, peanuts, and sweet potatoes when they find them. Though the Xerus is primarily an herbivore, there are several animal-based sources of protein that they will seek out during their diurnal treks for food. When available and needed, their diet will also consist of insects, eggs, and small animals (in small amounts).

Like all the other animals, Xerus also eat and are eaten by other living creatures, holding their own in the food chain. The largest threat to the life of Xerus is the jackal, though the black-backed jackal seeks it out the most. Xerus is also pursued by snakes, lizards, and the puff adder.

Xerus is known to be a fast animal, which is necessary to beat the animals that prey on them. However, it is unclear how quickly that they may move, since their quick sprints are often short-lived.

On another front, the industrial activities that humans carry out also pose a threat to the lives of Xerus as it may lead to the degeneration of their natural habitat. The Xerus population is plenty around the globe and the IUCN has declared it as “not extinct.”

There is no known breeding period in the case of Xerus. However, the male and female Xerus mate throughout the year despite having only single mating partners. It is said that they sometimes give birth through July and October. The gestation period in Xerus is about 48 days after which the young ones are weaned for about 52 days.

Female Xerus reach sexual maturity at 10 months of age while the sexual maturity in males usually happens when they are eight months old. The female Xerus can breed all year long, but very few of them produce more than one little annually. Usually, females produce about one to three babies per litter.

The babies that are called pups are born hairless, with their eyes closed. They are known to open their eyes around 35 days of age and are looked after by their mothers for about 45 days. The pups are known to reach adulthood at about 150 to 153 days.

While in captivity, the Xerus can survive up to 11.5 years, but there are no known records of their lifespan in the wild.

Very little is known about the population of these animals. However, there are enough African ground squirrels and the IUCN has declared them as ‘not extinct’.

View all 2 animals that start with X

What kind of an animal is a Xerus?

A Xerus is a mammal that sometimes goes by the name African ground squirrel. It lives in sub-Saharan Africa in grasslands, savannas, and deserts. It is omnivorous, diurnal and gives birth to one to three live pups.

What does a Xerus eat - are they carnivores, herbivores, or omnivores?

A Xerus usually eat seeds, nuts, and roots. However, they sometimes also feed on eggs and other small animals.

What eats a Xerus?

The predators of a Xerus include snakes, lizards, and jackals.

No, Xerus are not endangered. In fact, they are sometimes called pests because of their habit of eating farmer’s crops. They are categorized as least concern by the IUCN Red List of Threatened Species and have a stable population.

How do you pronounce Xerus?

Where do Xerus live?

These squirrels are native to Africa but can also be found in Namibia, Lesotho, and Botswana. They usually prefer living in open areas especially woodlands or grasslands.

Are Xerus carnivores, herbivores, or omnivores?

Xerus is mostly herbivore in nature and usually eat seeds, nuts, and roots. However, they sometimes also feed on eggs and other small animals.

What Kingdom do Xerus belong to?

Xerus belong to the Kingdom Animalia.

What phylum do Xerus belong to?

Xerus belong to the phylum Chordata.

What class do Xerus belong to?

Xerus belong to the class Mammalia.

What family do Xerus belong to?

Xerus belong to the family Sciuridae.

What order do Xerus belong to?

Xerus belong to the order Rodentia.

What type of covering do Xerus have?

Xerus are covered in Hair.

What type of covering do Xerus have?

Xerus are covered in Hair.

What is the average litter size for a Xerus?

The average litter size for a Xerus is between 1 and 3.

What is an interesting fact about Xerus?

Xerus are squirrels that lives in burrows in Africa.

What is a baby Xerus called?

A baby Xerus is called a pup.

What is the lifespan of a Xerus?

Xerus can live for 11.5 years in captivity. Their average lifespan in the wild is unknown.

What is a baby Xerus called?

A baby Xerus is called a pup.