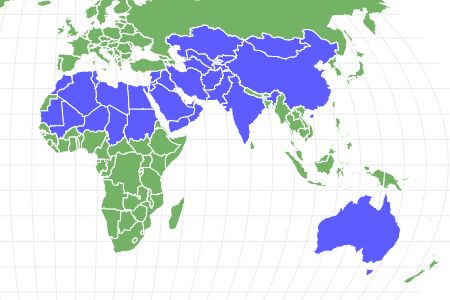 View all of our Camel pictures in the gallery.

View all of the Camel images!

The Camel (also known as the Dromedary Camel, the Arabian Camel and the One-Humped Camel) is a large hoofed animal that is most commonly found in the hot deserts of Northern Africa and the Middle East. Thought to have been first domesticated by native people more than 5,000 years ago, these hardy animals have proved vital to the survival of humans in these areas as they are not just used for transporting both people and goods, but also provide a good source of milk, meat and wool. The Camel is one of the most unique mammals on the planet and has adapted perfectly to life in the desert where food and water can often be scarce, and the temperature changes rapidly from the scorching-hot days to the cooler nights. However, although they would have once been found freely roaming the Arabian deserts, they are today extinct from the wild but the domestic population is widespread and numerous.

Camels are animals that have a number of adaptations to help them to survive the most successfully in such dry and arid climates starting with their cream to brown coloured, short but thick fur which not only protects their skin from the sun during the day, but also helps to keep them warm when the temperature plummets at night. Their long legs keep their body high above the hot ground and their two toes on each foot are able to spread widely apart to prevent them from sinking into the sand. The bottoms of their feet are also padded to help them when in rocky or stony regions. Camels are animals with large eyes and nostrils which give them good sight and smell. They have a double layer of long eyelashes and can close their slit-like nostrils to protect them from dust storms. Camels are able to survive for long periods of time without either food or water as they store fat in their hump which can be used to give the Camel energy when resources are scarce. Camels are an animal with multiple stomachs, having three different stomachs that specialize in absorbing as many nutrients as possible from their harsh environment.

Historically the Camel would have roamed throughout the deserts of Northern Africa, the Middle East and as far into Asia as western India where the surroundings can change from the soft, powdery sand dunes to more hostile and rocky regions. Today, Camels are no longer found in the wild but still exist as domestic animals in these areas and provide both transport and an important source of food for the local people. Their ability to go for so long without both food and water, along with being able to carry heavy loads has meant that they have allowed people to travel further across the desert. Today, millions of domestic Camels exist in the desert along with a feral population that can be found in the deserts of Central Australia.

Camels inhabit these dry and arid regions in herds that can contain up to 40 individuals and are comprised of females with their young and are led by a single, dominant male. During the breeding season, dominant males protect their harem of females by biting, spitting and leaning on their rival males. Camels rest by lying down and do so by bending their front legs underneath them, followed by the back. They are also known to move in a different way to many mammals by moving both left legs then both the right to make them walk. In order to try and conserve vital moisture in such hostile conditions, Camels have a minimal number of sweat-glands (very few in relation to their large body size), which along with the fact that they will allow their body temperature to rise in the heat, means that they lose water much more slowly than other large mammals.

Camels are able to breed by the time they are between three and four years old for females and five years old for males, when the dominant male of the herd has breeding rights with the females. Both female and male Camels come into heat during the breeding season which usually lasts between November and March. After a long gestation period that can last for up to thirteen months, the female gives birth to either a single calf or occasionally twins which can already weigh as much as 40kg at birth. Within eight hours the young calf is able to stand and is then nursed by its mother in the protection of the herd until it is big and strong enough to become independent. Young Camels begin to eat grass when they are between two and three months old and are weaned at roughly four months of age.

Although the Camel is technically a herbivorous animal their diet is not strictly vegetarian as they are known to chew on bones and eat carrion to supplement their diet. Another adaptation for living in the desert is their split, leathery lip which helps the Camel to eat tough and thorny plants which other animals avoid. They are also known to consume plants that are high in salt which again means there is less competition from other animals for food. One of the most remarkable things about Camels is their ability to store the energy from their food and water as fat in their hump, which means they have a ready supply of energy when food and water are scarce. Camels can lose up to 40% of their body weight before needing to replenish themselves and once a water hole or oasis is found, they can drink around 40 gallons of water in a very short time. For a complete analysis of their diet, give our ‘What Do Camels Eat? Their Diet Explained’ page a read!”

Although they no longer exist in the wild, the large size of the Camel means that it would have had limited predators. Lions and Leopards would have been their most common predators however, the fact that Camels inhabit hostile, arid regions where very few large, carnivorous mammals can be found means that they would not have been hunted as regularly as other hoofed herbivores. Although they were first domesticated by people more than 5,000 years ago they would have been hunted by them for their meat and hides for longer. Today, although no Camels exist in the true wild their domestic population is high and they are commonly found alongside people from Northern Africa to Western Asia.

Camels are not only hardy, desert animals because they can survive without water for up to 10 months providing they find food, but their relatively slow-paced lifestyle means that they can also travel vast distances (sometimes more than 30km) in just one day, whilst carrying a load that could exceed 200kg. As with a number of other domesticated animals, there are now various different breeds of Camel that have resulted from cross-breeding Camels with Bactrian Camels to produce individuals that are either bigger and stronger to be used as working animals or are incredibly fast. Unlike any other mammal, Camels have unique oval-shaped red blood cells which allows the blood to keep flowing smoothly when the animal becomes dehydrated and the blood thickens.

Camels have been used for thousands of years by people both for transporting goods across the desert and as a good source of milk and meat. Their woolly hair can also be used to make clothing along with their leathery hides. Like other domestic animals, there are now numerous breeds of Camel but not all have been bred for truly practical uses with faster and faster breeds appearing that are then used for Camel racing. Their placid nature though, has meant that they can live alongside people and other livestock without hardly any problems.

Today, although the wild Camel population is extinct they are Common as domestic animals throughout much of their natural range and further, with estimates ranging as high as 20 million individuals. In the 1800s, the first Camel was imported into Australia to be used to help people get between places in the vast desert. Since then more and more have followed which has to led there now being a strong feral population that is possibly as high as 1 million Camels roaming the deserts of Central Australia.

Are Camels herbivores, carnivores, or omnivores?

What Kingdom do Camels belong to?

Camels belong to the Kingdom Animalia.

What class do Camels belong to?

Camels belong to the class Mammalia.

What phylum to Camels belong to?

Camels belong to the phylum Chordata.

What family do Camels belong to?

Camels belong to the family Camelidae.

What order do Camels belong to?

Camels belong to the order Artiodactyla.

What type of covering do Camels have?

Camels are covered in Hair.

What genus do Camels belong to?

Camels belong to the genus Camelus.

Where do Camels live?

Camels are found throughout the Middle East.

In what type of habitat do Camels live?

What are some predators of Camels?

Predators of Camels include lions, leopards, and humans.

How many babies do Camels have?

The average number of babies a Camel has is 1.

What is an interesting fact about Camels?

Camels can survive without water for 10 months!

What is the scientific name for the Camel?

The scientific name for the Camel is Camelus dromedarius.

What is the lifespan of a Camel?

What is a baby Camel called?

A baby Camel is called a calf.

How many species of Camel are there?

There is 1 species of Camel.

What is the biggest threat to the Camel?

The biggest threat to the Camel is drought.

What is another name for the Camel?

The Camel is also called the dromedary camel, Arabian camel, or one-humped camel.

How many Camels are left in the world?

There are 20 million Camels left in the world.

How fast is a Camel?

A Camel can travel at speeds of up to 40 miles per hour.