3 Scorpions Found in Florida (One Can Reach 4 Inches)

Ernie Cooper/Shutterstock.com
Share this post on:
More Great Content:
What Do Scorpions Eat?
Are Scorpions Poisonous or Dangerous?
A Gigantic Grizzly Casually Sits Next To…
How Deep is the Ohio River?
The 7 Most Aggressive Sharks in the…
The Largest Bald Eagle Nest Ever Found

Scorpions just might be some of the scariest-looking creatures on Earth. But, if you’re checking out scorpions in Florida, have no fear—there are no scorpions in Florida capable of killing people. Moreover, scorpions very rarely sting humans—they would rather save their venom for their favorite foods, cockroaches, and spiders.

Here, we’ll learn a little more about scorpions, and find out whether or not scorpions in Florida are venomous. Then, we’ll take a deep dive into the three species of scorpions currently crawling around Florida.

Scorpions are some of the most fearsome insect hunters on the planet. All scorpions in Florida come equipped with eight legs, two pincers, and one stinger. The pincers are located on the front two legs, which are used for hunting, rather than for walking. Scorpions incapacitate and kill their prey using venom delivered by their deadly stinger.

But, stingers and pincers aren’t the only cool things about scorpions; they’re also fluorescent. This means that, under ultraviolet light, scorpions glow. So, if you’re trying to find scorpions in Florida in the dark, just pull out a UV light.

Unlike spiders and ticks, which reproduce by laying eggs, scorpions give birth to live baby scorpions. Females can birth up to 100 young at a time. Baby scorpions cling to their mother’s back until they’ve molted, and their exoskeletons grow hard enough to protect them. Even the tiniest scorpion can sting, and babies look like miniature versions of their parents. Scorpions in Florida may live up to three years in the wild.

Are Scorpions in Florida Venomous?

Yes, scorpions are venomous. But, is that venom dangerous to humans? The answer is, not really. Unless you’re a young child, a very elderly person, or someone with an allergy to scorpion venom, stings will do no more than hurt. Fortunately for residents and visitors, scorpions in Florida are not capable of killing a human. And, they only sting in the direst of circumstances.

Where Do Scorpions Live in Florida?

Scorpions live in all parts of Florida. The lush tropical climate suits these heat-loving arthropods well. They live either on the ground, under rocks and leaf litter, or in the loose bark of trees. Scorpions can also be found on dirt roads, or in homes, hunting for insects.

There are only three types of scorpions in Florida, each with its appearance and behaviors. None of these species presents a danger to humans. Instead, the presence of scorpions is often beneficial, as they feed on nuisance insects, like cockroaches.

Let’s take a closer look at the three species of scorpions in Florida.

Florida bark scorpions are the biggest scorpions in Florida. Adults can grow up to four inches long. These scorpions are uniformly brown with small, yellow markings. They prefer tropical areas in Florida, as these places most closely mimic their native tropical forests. Bark scorpions live primarily under bark or rocks, but can also sometimes be found in or near homes.

These scorpions live in every part of the state, except the Florida Keys. they’re not quite as big as the Florida bark scorpion, topping out at only 3 inches long. Hentz striped scorpions are generally red-brown, dark brown, or tan, with pale stripes across their backs. These scorpions eat cockroaches, insects, spiders, and even smaller scorpions.

Like the other scorpions in Florida, the Hentz striped scorpion poses little danger to humans. Stings may be painful, but only turn life-threatening for those who are allergic to scorpion venom.

Unlike the other scorpions in Florida, which inhabit much of the state, the Guiana striped scorpion lives in only a few counties. These include Collier, Monroe, and Miami-Dade county. Guiana striped scorpions grow up to three inches long and have light brown or yellow bodies. As their name suggests, they also have darker stripes that run from their head to the base of their stinger and have more yellow legs, pincers, and tails.

Out of all the scorpions in Florida, the Guiana striped scorpion just might have the most painful sting. Stings from this scorpion are reportedly extremely painful and remain tender for hours after the initial sting.

Stings from scorpions in Florida don’t require medical attention unless the victim is: a child, elderly person, or someone with an allergy to scorpion venom. If the victim falls into one of these categories, your first step should be to seek out medical attention. If not, anticipate pain, tingling, or even numbness at the area of the sting, but no life-threatening side effects. Pain medication and time will reduce the severity of the pain. 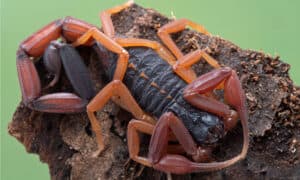 3 Scorpions Found in Florida (One Can Reach 4 Inches) 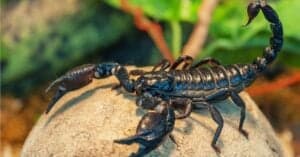 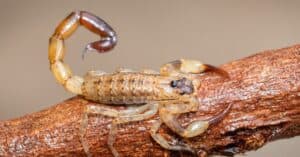