Invasive species pose a serious threat to several of the United States’ native wildlife habitats and have a large financial impact on agriculture, forestry, and recreation. An invasive species is both non-native and damaging to the environment. Any living creature, from flora to fauna, including insects, birds, fish, and even snakes, can become an invasive species. Introduced or naturalized species, feral species, and introduced illnesses are examples of “invasive species.” Whether intentionally released or accidentally released, invasive snakes can cause significant environmental damage. This article will discuss the 8 invasive snakes in the United States and how destructive they can be.

When an animal is introduced to an environment where it is not native, it might cause problems. The brown tree snake, for instance, was brought into Guam shortly after WWII. Since then, it has wiped out Guam’s native birds, lizards, and other vital wildlife. Guam has lost ten of its twelve native forest birds, most of its bats, and approximately half of its native reptiles. Another example is when the introduction of Burmese pythons to Florida has been connected to significant animal losses in Everglades National Park. Invasive species have the potential to extirpate native flora and fauna, reduce biodiversity, and compete for limited resources with native creatures.

8 Snakes That Are Invasive in the US

A non-venomous snake, the Burmese python is characterized by several brown streaks down its back bordered by black. Burmese pythons can reach a length of 16 feet or 5 meters in the wild. There have been no known human deaths among the Burmese pythons that inhabit Florida, but they are considered destructive. They are, nonetheless, one of the top apex predators on the planet.

These massive snakes are not endemic to Florida and pose a severe threat to the current ecosystem. But how did the Burmese python survive in Florida despite not being a native species? A Burmese python can reach 26 feet and weigh 200 pounds. They can catch and eat small and big animals, such as rabbits and foxes. Since alligators and humans are their only predators, these 26-foot, 200-pound snakes can progressively increase their population. They eat raccoons, opossums, and bobcats, among other small mammals that other creatures depend on for survival. When these animals become scarce, alligators and large cats would be forced to relocate to find food.

The African rock python has been known to reach weights of more than 200 pounds, making it the largest snake in Africa. Average African rock pythons typically weigh 121 lbs and are found in Sub-Saharan Africa. They love open savannas and damp evergreen woods near freshwater bodies, and their name comes from the fact that they are frequently seen on outcroppings. As species of the python family, African rock pythons lack venom and rely instead on their large bodies and powerful muscles to constrict prey.

The brown tree snake, commonly referred to as the brown catsnake, is a tree-dwelling colubrid snake found in Indonesia, the Solomon Islands, New Guinea, and Australia. This snake is notorious for being an invasive species that has wiped off the bulk of Guam’s native bird fauna. The snake was initially discovered in Guam in the 1950s, most likely after hiding in cargo ships bound for New Guinea. A swarm of brown tree snakes was found on Cocos Island, a tiny atoll off Guam’s southern shore, in 2020, marking the first time brown tree snakes have established themselves off the island.

Birds, small mammals, lizards, and eggs are among the snake’s favorite prey. Because the tree snake does not have natural predators, it has spread quickly and swept the island’s native aerial wildlife. Brown tree snakes also crawl on power lines, resulting in costly power outages and electrical damage. These snakes have a low level of venom, so they are not considered harmful to adults, and no deaths have been reported.

The boa constrictor, also known as the red-tailed boa or common boa, is a giant, non-venomous, heavy-bodied snake commonly kept and produced in captivity. These snakes can be found in tropical South America and several Caribbean islands. Although not endemic to North America, boa constrictors have been found in Florida since the 1970s. Despite being introduced to several locations in Florida, they are specifically known to settle and breed in and around the Charles Deering Estate in Miami-Dade County.

These serpents are vast and thick, characterized by dark-brown hourglass-shaped saddles that fade to reddish stripes as they approach the tail. Small boa constrictors are rarely a threat to humans or pets. On the other hand, larger boa constrictors have huge, sharp teeth and can potentially cause gashes with their bites.

The reticulated python is a nonvenomous constrictor endemic to Southeast Asia. Considered the world’s longest snake, this species is classified least concern on the IUCN Red List due to its widespread distribution. Females grow to be longer than males, with most adults in the wild reaching 13-16 feet in length.

Because of the snake’s harmful effects on native fauna, reticulated pythons are considered an invasive species in Florida. Reticulated pythons, like all non-native species, are not protected in Florida and can be killed humanely on private property with the approval of the landowner. In their native region in Asia, these pythons devour a wide variety of species, including fish, rodents, wild boar, birds, chickens, smaller monkeys, and nearly any other animal, making them a considerable threat to Florida’s wildlife.

The banded water snake, sometimes known as the southern water snake, is a nonvenomous colubrid snake endemic to the Midwest and Southeast of the United States. Banded water snakes are becoming more common in California’s waterways, raising concerns among biologists at the University of California at Davis, with species being discovered in several regions near Sacramento and Long Beach. The banded water snakes are harmless to people and thrive in suburban areas and human-disturbed ecosystems. They may, however, constitute a threat to native aquatic species such as frogs, snakes, and salamanders since they fight for the same source of food or directly prey on them.

The green anaconda of South America is the world’s largest snake. The reticulated python, its relative, can grow to somewhat longer lengths, but the green anaconda’s massive girth makes it nearly twice as hefty. Green anacondas are endemic to South America and can be found in swamps, marshes, and slow-moving streams across the Amazon and Orinoco basins. They are also found in Paraguay, Ecuador, Peru, Bolivia, and Guyana. Green anacondas consume wild pigs, capybara, caimans, deer, birds, turtles, and even jaguars to grow their massive size. They are nonvenomous constrictors that belong to the boa family.

Although this snake is not known to reproduce in Florida naturally, sightings have come in from Alachua County and Miami-Dade County. If propagation of these invasive snakes continues in the state, apex predators such as gators might have an eager adversary for the state’s wildlife.

As if the invasive, apparently unstoppable Burmese pythons weren’t bad enough, researchers just discovered that Florida’s issue snakes are much better prepared to survive than previously assumed. According to a 2018 study published in Ecology and Evolution, around 3% of the 400 wild Burmese pythons studied had DNA markers for a completely distinct snake species.

The Indian rock python, a smaller, faster relative of the Burmese python, is the snake in question. The scientists who worked on the study believe that the hybridization took place long before the snakes were released into the wild. These Burmese-Indian Rock hybrids have most likely been residing in Florida all along. Their presence in the Everglades could be crucial to the invasive snake’s survival. This gives hybridized pythons an advantage over their non-hybridized counterparts. They can thrive in a wider range of environments than non-hybridized Burmese pythons. As a result, they pose an even greater threat to Florida’s biodiversity.

Once a population of invasive animals, namely reptiles, has been introduced and spread into a non-native area, it is almost impossible to eradicate these animals without harming the environment or other species inhabiting it. However, it is possible to control invasive populations if detected early on and responded to rapidly and properly.

Invasive species are becoming increasingly worrisome in the U.S. Find out more about which species are causing problems and where: 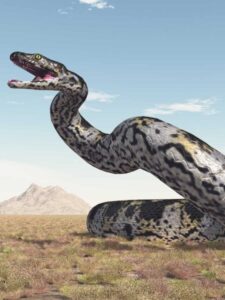 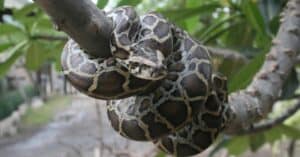 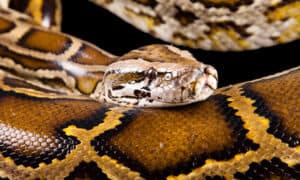