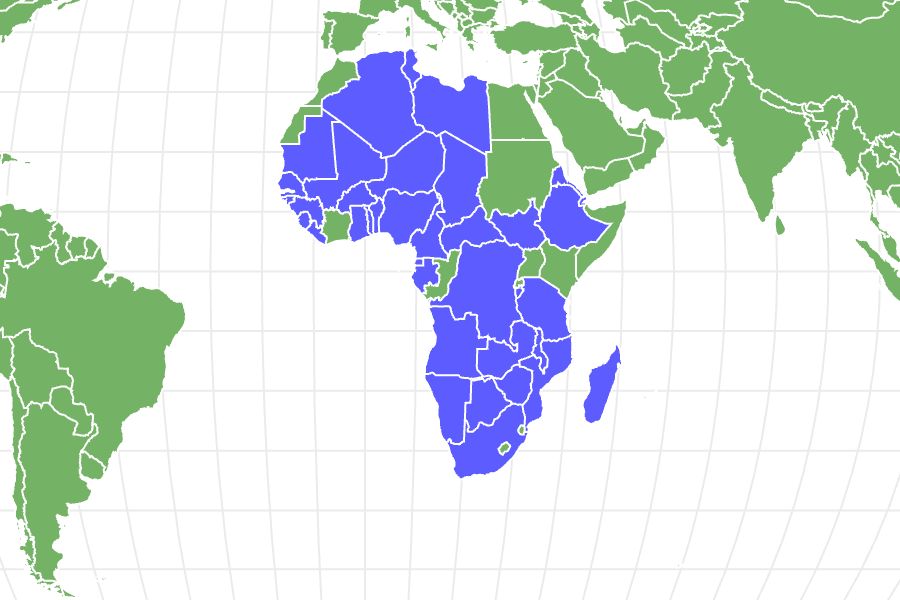 View all of our Rock Python pictures in the gallery.

View all of the Rock Python images!

“The largest snake in Africa!“

It’s huge, it’s beautiful and though it’s nonvenomous, the African rock python is a reptile to be respected. Who needs venom when you have coils that can crush the life out of a grown goat and jaws that can unhinge to swallow it whole? Read on to learn more about this amazing beast.

Here are five amazing facts about these snakes.

Where To Find Rock Pythons

Rock pythons are found in many locations in sub-Saharan Africa, as long as it is not too dry, as it would be in a desert, or too cold as it would be high on a mountain. Their preferred habitats are open savannas and moist evergreen forests near bodies of freshwater, and they get their name because they are often found on outcroppings.

The African rock python’s scientific name is Python sebae. Python is taken from the Greek nake for the serpent-like monster killed by the god Apollo. Sebae comes from Albertus Seba, a Dutch zoologist. There are two subspecies of P. sebae. They are the following:

The Different Types of Rock Python

Though the number of wild African rock pythons hasn’t been evaluated, the reptile’s conservation status is near threatened. This is largely due to poaching for its meat and its hide. The snake is also under some pressure from habitat loss.

An adult P. sebae is a huge animal, ranging from nearly 10 feet to over 25 feet in length, and females are bigger than males. It is not just long but has a robust body that can contribute to it weighing close to 200 pounds or more. It has a small, v-shaped head with a spearhead-shaped pattern on top. The body is grayish-brown, grayish-green, or yellowish with darker blotches edged in white, and the scales are smooth. The belly of the snake is white and speckled with black.

These beautiful patterns and colors make the snake vulnerable to hunters who want its hide for leather. On closer examination, a person might discover pelvic spurs. These are what is left of the hind legs snakes got rid of eons ago. The presence of pelvic spurs is another aid in the identification of a python.

These snakes are nonvenomous, but they can grow to be so big and powerful that it’s not safe for an inexperienced person to be around them. Even experienced people are sometimes attacked.

As with most types of snakes, P. subae is solitary save for the mating season. Despite their great size, they can climb trees well. They’re also good swimmers and sometimes have fish as part of their diet. They are mostly nocturnal predators, though they might bask in the sun to warm up during the day. Younger snakes are more active at sunup and just after sundown and seek shelter in a tree cavity or under a rock outcropping.

These snakes are ready to breed when they’re between three and five years old, which is when females are about 8.86 feet long, and males are about 5.9 feet long. They have a lifespan as long as 30 years in captivity.

The snakes mate in the late fall to late winter or early spring. Both males and females stop eating at this time, and the female won’t eat again until her eggs hatch. She’ll lay them about three months after mating in an abandoned burrow, a cave, a hollow tree, or a termite mound. A clutch can contain from 20 to as many as 100 surprisingly large, hard-shelled eggs. She’ll guard them until they hatch, which is 65 to 80 days after they were laid. Hatchlings are independent at birth. Some mothers take no more care of their babies, while others guard them for as long as two weeks. This is very unusual behavior for a snake.

Though big rock pythons are capable of killing humans, this is very rare. Humans, however, frequently kill rock pythons for their meat and their hides. Some people try to keep these animals as pets. Juvenile pythons are beneficial for they eat rats and other pests before they move on to larger fares as they grow.

Rock pythons are not venomous, but that doesn’t mean they’re not dangerous. They are aggressive predators and strike out when they feel threatened. They have large, curved teeth that deliver painful bites that can become infected, and their coils can suffocate or cut off blood circulation.

How do rock pythons hunt?

Like all snakes, the python has a Jacobson’s organ that allows it to pick up chemical signals produced by potential prey. They also have pits along their mouth that can detect heat given off by warm-blooded animals. Once the prey is detected, the reptile follows it or waits for it to come within range. Then, it will strike, grab the animal with its teeth and wrap its coils around it. Pythons don’t crush their prey but suffocate it until it dies from heart failure. Then, the python swallows it whole.

Rock pythons are famous for being aggressive. Despite this, it is rare for one to kill a human.

Where do rock pythons live?

Rock pythons live in the savannas and forests of sub-Saharan Africa.

What do rock pythons eat?

A snake as big and powerful as a rock python has a variety of prey as its diet. Juveniles eat rats and other small-sized animals. Adults eat everything from antelopes, to monkeys to crocodiles to livestock. As they are cold-blooded, these snakes don’t need to eat as regularly as most mammals do, and at least one snake went over two years between meals.

What is a rock python?

A rock python, Python subae, is a very large snake that lives in various locations and warm, moist habitats around Africa. It is not venomous but kills its prey through constriction.

How big of animals can rock pythons eat?

The largest animal ever eaten by a rock python was a 150-pound hyena. The incident was recorded in 2017. Previously, the largest record of a rock python meal was a 130-pound impala.

Rock pythons do not make good pets. They grow much too large, can deliver a nasty bite, and to care for them properly is expensive. If they escape or are released into the wild, they can do damage to the ecosystem as an invasive species.

Rock pythons have been known to eat lion cubs. However, this is rare because the cubs are usually protected by the adults in the pride.

They are good swimmers and can even stay underwater for a surprisingly long time.

Can a rock python eat a human?

Smaller humans have, once in a great while, been eaten by these snakes. This is one reason why P. sebae shouldn’t be kept as a pet.