They are the heaviest snake in the world 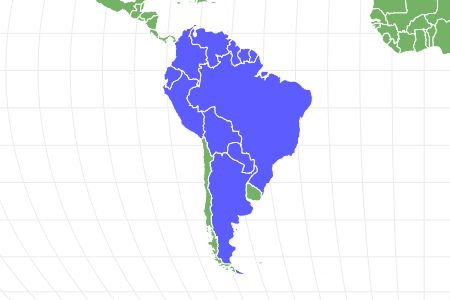 View all of our Anaconda pictures in the gallery.

View all of the Anaconda images!

“Anacondas are the heaviest snakes in the world.”

Anacondas rival pythons for the longest snake in the world, but they far outdo pythons in weight. They are the heaviest snakes in the world, and can reach lengths of 20 feet for females. Anacondas are endemic to the Amazon and Orinoco River Basins of South America.

Make sure to read ‘Discover 10 Incredible Anaconda Facts‘ for more facts about these incredible snakes.

Anacondas (Eunectes sp.) live in South America, where they have long been known by native people as ‘sucuri’.

First discovered by Westerners in the 17th century, they were initially called by many of the names first given to the Asian dwelling python. The word ‘anaconda’ is thought to come from either the Sinhalese ‘henakanday’ (meaning ‘thunder snake’), or the Tamil ‘anaikondran’ (meaning elephant killer). These names were used in reference to pythons, but anacondas, being very similar, were given the same titles.

The Latin name for the green anaconda (Eunectes murinus) has a double meaning. First, ‘Eunectes’ means ‘good swimmer’. Second, ‘murinus’ means ‘of mice’, because it was initially thought that anacondas mostly ate mice.

These snakes are also often called ‘boa constrictors’. The word ‘boa’, in Latin, refers to cows, and anacondas were associated with cows in folk legend, therefore giving them the name ‘boa constrictor’. In these folk legends, the anaconda was said to chase down cows, then suckle from them until the cow was completely drained.

Popular culture mythologizes anacondas as having an enormous size and man-eating predilections. Though many dubious reports of giant snakes exist, the largest reliably measured anacondas are between 16-18 feet long, with very few specimens exceeding this length. In 2016 an Anaconda was killed in a construction explosion and reportedly weighed more than 800 pounds and measured 33 feet in length. While the pictures of this specimen were impressive, it wasn’t measured in a reliable enough way to make this rare anaconda’s size “official.”

The anaconda’s true exceptionality comes from its girth; they are the heaviest of all snake species alive in the world today. Pythons may be longer, but anacondas weigh in at close to double what similarly lengthed pythons weigh. Adults can weigh upwards of 200 pounds and have thick necks and large heads to match their girth.

Anacondas tend towards olive green in color, with darker blots and splotches running down their bodies in intricate patterns. They also have a yellowish-brown stripe running the length of their body, about midway down the girth. Anacondas have lighter-colored undersides. They maintain scales that grow larger farther down the body, with the only scale less flesh located at the cloaca (opening for excretory and genital purposes).

Females are sexually dimorphic, and reach much greater sizes than males. Male anacondas rarely exceed 14 feet in length, while adult females may reach 20 feet and weigh more than 200 pounds.

Anacondas are laconic during the day, becoming more active at dusk and nightfall. They spend most of their lives in the water and are very good swimmers for it. They can move on the land, though they are much slower and less agile. Anacondas also like draping themselves over branches overhanging the water to sun and dry out.

These snakes are solitary for most of their lives and come together only during the rainy season to mate. They spend much of their time lying just below the surface of the water, with only the tops of their heads exposed to the air. Anacondas have nostrils and eyes that are located on top of their skull, enabling them to remain almost completely hidden, while still breathing and seeing everything around them.

Anacondas are native only to South America. They live primarily in the Amazon and Orinoco River Basins, but can also be found as far north as Trinidad, and as far south as Paraguay. You can expect to find anacondas in the swamps, slow-moving rivers, and dense rainforests of Bolivia, Brazil, Ecuador, Paraguay, Peru, Colombia, Venezuela, Trinidad, and the Guianas.

Though anacondas are mostly aquatic, they can be found in dryer areas like meadows. They prefer high heat and humidity and are most at home in the water.

Like most snakes, anacondas are opportunistic carnivores and will hunt and consume almost anything that makes an easy meal. For young anacondas, this usually includes fish, amphibians, reptiles, and small rodents.

Adult anacondas have a much more varied diet. They are so big, and such adept hunters, that they can eat almost anything they choose. The bigger the meal, the less often they have to eat. But, big meals sometimes come at a cost; attacking something like a jaguar or a caiman comes with risk. But if the anaconda can get its coils around the beast, the struggle is brief.

Other animals on the menu for anacondas include: capybara, tapir, deer, caiman, crocodile, and sometimes other anacondas. Baby anacondas, or, hatchlings, are at particular risk of predation by larger snakes, who see only a meal. Female anacondas won’t say no to eating the smaller male anaconda either.

Anacondas have very slow metabolisms, and an adult can go weeks or months without eating. The young have to eat more often, usually at least once a week, though this is partly because they eat smaller prey, and therefore need more meals. Female anacondas often go their entire gestation (about 7 months) without hunting and can lose up to half their body weight in this time.

Young anacondas face many threats, including bigger anacondas, caimans, crocodiles, birds, jaguars, and humans. If they make it to adulthood, most of these threats disappear.

Adult anacondas have no natural predators. The single exception to this is humans, who, due to centuries of fear-mongering mythology, will often kill these great snakes on sight.

Anacondas are currently listed as ‘Least Concern’, they are not considered endangered. They are, however, at risk from habitat loss, poaching, and capture for the wildlife trade. They remain commensurate hiders though, and hunting them is difficult, even for experienced researchers.

Most species of anaconda give birth to live young; this is not to say that they don’t have eggs. Anacondas are ovoviviparous, which means they start out as eggs located inside of the mother.

Male and female anacondas come together to mate during the rainy season, which lasts from April to May. Females may leave pheromones on the ground, or they may release them into the air; scientists aren’t sure. But, either way, the males come to the females.

Once together, males begin competing with each other for the privilege of mating with the female. This can create something called a ‘breeding ball’, when many males fight over one female. The males group up, entangling themselves with one another, all trying to reach the female snake at the center of the ball.

Females become sexually mature between 3-4 years of age, while males become mature around 18 months. Once impregnated, the female will carry the young (first in eggs, then as live young) for 6-7 months. The eggs hatch within the mother, and when the hatchlings are ready, they emerge in thin sacs that they quickly breakthrough to swim away. Mothers give birth to 20-40 young, though there have been reports of up to 100 young emerging.

Wild anacondas have a lifespan of about ten years. In captivity, they may live over 30 years.

There are four species of anaconda with the most common being the green anaconda. Here is a list of each type of anaconda:

Anacondas live only in South America. Because of their aquatic lifestyle and tendency to flee from humans, they are intensely difficult to research. Therefore, there are no known estimates of potential population size for the most common species; green and yellow anacondas.

There are however two more species of anaconda; the Bolivian and dark-spotted anaconda. These species have a very limited range; scientists have observed them only a few times. This leads scientists to estimate that they are very rare, and likely have modest population sizes.

Would a Komodo Dragon or Anaconda win in a fight?

Komodo dragons live on a few small islands in the nation of Indonesia while anacondas live far away in South America. Yet, as two of the largest reptiles, people often ask which would win in a fight. If a very large anaconda and Komodo dragon fought, it’s likely the anaconda would emerge victoriously. In their native range, anacondas often hunt large caiman and aren’t unfamiliar with eating large reptiles.

What's the difference between an anaconda and a titanoboa?

There are many differences between an anaconda and a titanoboa. When they were alive, titanboas were much larger than anacondas and they are said to have only eaten fish, while anacondas eat a variety of other things.

Who would win a fight between an anaconda and an inland taipan?

An anaconda would win a fight against an inland taipan. The size difference, in this case, would result in the anaconda being able to bite, constrict, drown, or use all three methods to kill the much smaller snake. The most likely outcome is that the anaconda would grab the inland taipan by the head or body and then crush it before swallowing it whole.

What's the difference between a rattlesnake and an anaconda?

The key differences between a Rattlesnake and an Anaconda are classification, size, habitat, range, and appearance. They both possess venom, but one has a higher risk of exposure to humans than others.

The differences are explained here.

Who would win a fight between an anaconda and an alligator?

An alligator would win a fight against an anaconda.

Although anacondas are large, effective ambush predators, they would have to perform an incredible ambush at the alligator’s head to disable it to such an extent that it could not fight back and kill it. 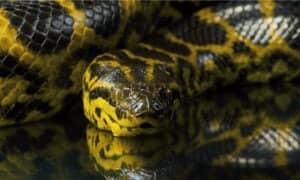 Discover the 4 Types of Anaconda Snakes 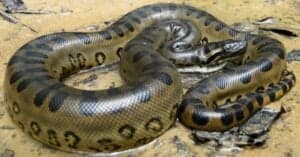