Is the Spider an Insect?

We tend to associate anything tiny creature that creeps us out as a bug, an insect. Spiders certainly fall into that list. So much so there’s even a scientific term (not to mention a kabillion movies), that reminds us why we ought to be afraid: arachnophobia.

But are spiders insects? Read on. We may surprise you with the answer.

Classified as arachnids, the creatures belong to the family of arthropods. There are over 45,000 known species and they’re found all over the globe. The common house spider is the one we’re most likely to come across. Other members of the family include mites, scorpions, and ticks. More unique species of these animals include wolf spiders, the brown recluse, red widows, and tens of thousands more.

Here is a list of traits that pretty much apply to all arachnids.

Spiders are everywhere in thousands of sizes, shapes, and regions. Each species has unique differences, diets, habits, and behaviors. Without chewing mouthparts, they use their saliva’s digestive enzymes to break down food before consumption. Spiders eat in small amounts as their stomachs are too narrow for large food particles.

All species are predatory though several plant-eaters are on record. There’s the Central American jumping spider that seems to prefer acacia leaf tips. This is a vegetable protected by venomous ants that also dine off the plant’s nectar.

The creature approaches the meal cautiously, keeping an eye out for the ants. If the coast is clear, it races for the plant, engaging in some rather amusing acrobatics and zig-zags. The creature is quite successful too. The ants, famous for chasing off other animals, never catch the jumping spider.

The Central American jumping spider keeps well feeding on the leaf tip, especially in the dry season when their insect prey is scarce.

In Mexico, the jumping spider is ready to eat both veggies and meat.

Except for 350 species, all other species have venom and use fangs to inject it into victims. But of all that do this, only about 200 spider species have a venom that threatens human health. Larger species with larger teeth can inflict greater pain, but it won’t produce prolonged health issues.

The black widow has the most dangerous venom. The pain can last several days and can be fatal if not treated. The widow has the shape of an hourglass and is red on the underside of its black abdomen.

Another venomous spider you don’t want to anger is the brown recluse. Their unique distinction is a violin-like marking at the top of the cephalothorax.

The lifespan of a spider has three stages: embryonic, larval, and nympho-imaginal.

The creatures may use extravagant mating rituals. The exchange helps in identification and gives males permission to approach the female without fear of a violent response. The male will have to make a hasty exit after though. There’s a good chance the female will eat him. Males are typically smaller than females.

The female lays eggs, packing them into silk bundles. These are egg sacs. The embryonic stage falls between fertilization and a spider reaching its adult shape. The larval process is the growing and development of its natural look. It starts pre-larva and through molting becomes larval. It feeds off its yolk supply.

After molting several times, the body structure becomes distinctive. It reaches the nympho-imaginal phase when its organs are completely set and the animal can hunt by itself.

The nympho-imaginal stage has its sub-stages: nymph/juvenile and adult/imago. Spiders cannot reproduce until they hit imago. This is when the male stops molting. Certain non-araneomorph species of females will molt throughout their entire lives.

Many species that live outdoors go looking for shelter in cooler months. They can live up to two years or more through overwintering in safe, sheltered areas. But in general, spiders only live for about 12 months.

The female tarantula can live up to 20 years.

A provoked or trapped spider bites every time. There are tarantulas with a patch of urticating hairs on the abdomen. Contact with these hairs irritates the skin and sometimes provoke allergic reactions.

Many species have other unique defense mechanisms. The golden wheeling spider in Namibia escapes the predatory tarantula hawk — which is actually a species of wasp — by turning on its side and cartwheeling into the sunset.

Here are seven really great and obscure skills you didn’t know arachnids have.

1. They can survive underwater.

The diving bell spider lives in ponds over in Asia and Europe. They do need air. What the arachnid does is trap air bubbles in their webbing, which we call diving bell webs. The creature resides in the bell, only going into the water to hunt. They travel to the water surface as necessary to replenish the oxygen supply.

Spiders don’t have wings but some can transport themselves through the air for hundreds of miles. They do so using silk threads to catch the wind. We call the behavior ballooning or parachuting. Many believe the skill is behind spiders showing up on vessels at sea or in remote regions.

3. They Enjoy a Nice Jig

Spiders can dance. Except for Antarctica, jumping spiders are everywhere. They’re one of the spiders that hunt rather than trap. These spiders also enjoy a nice dance number. It’s part of their mating ritual. Australia‘s male peacock, a member of the jumping spider family, gets into some lethal abdomen shaking and leg waving to get a female’s attention.

4. Spiders Do Not Have Actual Blood

Spiders are rare creatures that do not have actual blood or veins to distribute any. Theirs is an open circulatory system. The bodies contain hemolymph. That’s pumped into and through arteries by the heart into regions called sinuses. These sinuses surround the internal organs.

5. Male Spiders: They Love Being a Meal

The red widows cannibalize their mates like the black version. But sometimes the red widow doesn’t want to and gets resistance from the male. He’ll force himself on the widow, shoving himself into her mandibles. The widow may reject the advance, spitting him out. He’ll return again and again until she relents and eats him.

Spiders are typically solitary but it’s not unusual for a group to form a community. Colonies can reach in the thousands within a huge communal cobweb. The spiders collaborate on catching prey and share in the harvest.

One particularly social species of spiders is the Anelosimus eximius, which is common to rainforests. Their numbers can reach up to 50,000 spiders, creating web systems that are up to 25 feet long and 5 feet wide. These social spiders have an ordered division of labor, with some collecting prey, some building and repairing webs, and others keeping the environment clean.

The ogre spider weaves a net between its legs. Waiting in the water, it catches fish that tries to pass through its legs. Bola spiders actually create a line and dangle it to catch moths.

So … Is the Spider an Insect?

Spiders and insects have the same ancestors but do not belong to the same species. So, spiders are definitely not insects.

Like insects, arachnids have an exoskeleton and are invertebrates. There are still unique characteristics that set them apart. To begin, insects are of the Insecta class and science lists spiders are as Arachnida.

Spiders have eight legs, two body parts, and eight eyes. The abdomen is a single body part. The head and thorax are fused. Spiders do not have distinct antennae or wings.

On the other hand, insects have six legs, two compound eyes, a pair of antennae, and typically four wings. They have three body parts: the head, thorax, and a segmented abdomen.

Insects have mandibles which they use to consume food. Spiders use their chelicerae to ingest food.

The insect head’s made of several parts, including a scape, pedicel, labrum, clypeus, and frons.

Arachnids do have more body parts than insects. Unlike spiders, insects do not have a patella, coxa, trochanter, or metatarsus.

Each has a different abdominal region. The spiders include spinnerets which they use to make webs. Most insects have suture, elytra, and scutellum in the abdomen. The eyes of the insect are more complex than the arachnid.

The insect has antennae and there are cuticles on spiders. Each plays a huge role in how these animals use their senses.

A lot of insects fly. Spiders do not. And insects, of course, do not spin silk webs. 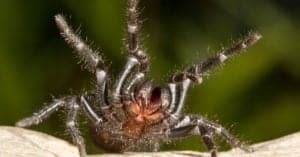